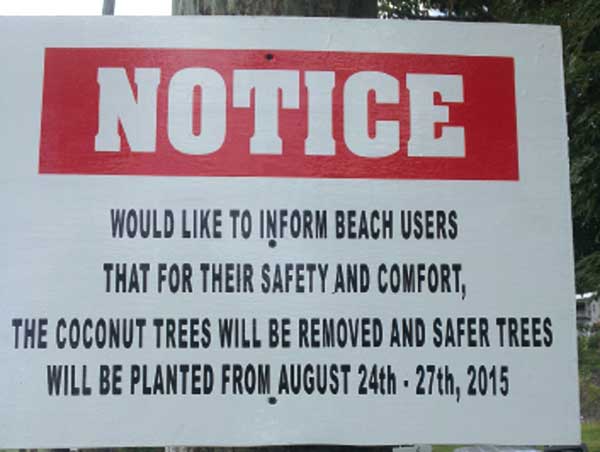 ON SATURDAY 15 August, I went to Rudy John Beach Park in Laborie for my usual walk and a sea bath. Prior to the Park being named Rudy John Beach Pack it was called En Ba´ Coco Park (meaning under the coconut trees). On arrival at the park, I was greeted with a sign which read: “Would like to inform beach users that for their safety and comfort, the coconut trees will be removed and safer trees will be planted from August 24 to 27, 2015”. There was no signature or date affixed to the board. On inquiry I was told that the Laborie Village Council has the authority to post such signs.

I further inquired from the beach users their opinion and the reason why they believe the sign was posted. Aloysious Peter, one of the beach users told me approximately six weeks ago a group of eight tourists were on the beach when a branch dropped from a tree and missed one of them. A short moment later a coconut fell from the same tree and nearly hit another person in the group. Both were near misses. The patrons complained to the proprietor of a bar nearby and left the Rudy John Beach Park to a safer location.

Mr. PatsonAnnius, an entrepreneur at the Laborie beach and hotel developer told me that he recently approached Mr. Jean, the Chairperson of the Laborie Village Council on the issue of the sign posted on the beach. During the discussion the chairperson was informed to keep the branches and trees pruned on a schedule of at least every three months for the safety of the beach users. Mr. Annius also suggested that signs be used to inform persons of falling coconuts and branches. Mr. Jean’s response was that there is no insurance for persons to climb so the Village Council will not be able to prune the trees. He said that the Council decided to take another action as issued in the sign. The Chairperson also informed the individual that this was a collective decision taken by the National Conservation Authority, LUCELEC, The Forestry Department of the Ministry of Agriculture and the Laborie Development Foundation.

The reasons given by Mr. WistonBicar, a Clerk at the Laborie village council to cut the trees are; some trees are too tall and there are reports where coconut trees are dangerous since dry branches and fruits have fallen on people. Some of the trees are not healthy anymore and are likely to snap and break at any time in the event of strong winds. The other reason given is that the spacing between the coconut trees is too close to each other. There was also the issue that some of these trees interfere with the Lucelec lines and therefore pose a threat to public safety. The councillor also said that there was a great level of urgency to cut the trees after the incident with the tourists.
Even after The Council members were told that the trees provide environmental benefits and shade for beach users they decided that they would cut the trees. They were also told that the trees are a typical feature or attraction of Caribbean beaches. When you think of a tropical beach you think of blue water, soft white or dark sand, tall palm trees (in our case in St. Lucia coconut trees), the wooden thatched buildings and secondary forest with lush green vegetation along the mountain side as the background. There is also the clear, acrylic blue Caribbean sky with white fluffy clouds to complement a wonderful atmosphere. This feature is typical for beaches in Thailand or anywhere in the Pacific.

Arguably some of the coconut trees there are indeed too tall and therefore should be cut since they pose a hazard to the public. If the coconut trees are to be cut the taller ones should be managed over a period of time at least five to seven years by replacing them with other coconut trees particularly the dwarf varieties. I find the Village Council and the other organizations involved should be more open to discussion and suggestions as the Rudy John Beach Park and its features are relished and revered by plenty of St. Lucians and tourists alike.

I sought the opinion of a Coastal Environmentalist on this issue and what I was told is that palm trees or coconut trees are normally used because they are often more resilient to the impacts of the weather, waves, sea rise or climate change. These trees also lessen the effects of coastal erosion. It was suggested that other avenues should be explored and not just cut down trees to solve a problem. Cutting the trees for me is not the solution. One solution suggested is to get those chair (that the LUCELEC climbers use with the spikes), belts and hats/helmets to climb the coconut trees. They need to manage the cutting of trees over a period of time. They also need to be more sensible about the whole issue as it relates to the falling of coconut branches and coconuts and control when and where it happens.

Mr. Bicar said the representative of the Ministry of Agriculture, Forestry, Food Production and Rural Development involved in the collective decisions to replace the coconut trees at En Ba´ Coco recommended that the following trees be planted to replace them: Dwarf coconut varieties, sea grapes, almond, calabash, pommes and star fruit.

My personal interest on this issue is that the beach is managed sustainably and the village council involves all the stakeholders in Laborie in major decisions that are of national interest particularly since Laborie is visited by a huge number of tourists annually. The tourism market in Laborie is very recent and everything should be done to see that it continues to develop at the same time persevering and respecting the culture and natural history of the community.

Organizations should not use authority absolutely but should do so with a greater level of social, environmental, cultural and historical consciousness particularly based on the knowledge of what has been happening on those beaches in St. Lucia over decades to inform their decisions. I also resent the fact that those trees will be cut without any public consultation. I am not resenting that fact that most of those trees should be cut since they have outlived their usefulness or are extremely tall or of close proximity to each other, but I believe they should be done over a period of time and the public briefed of the plan. Therefore there should be a plan in place to explain to the people in Laborie what needs to be done, when the trees will be cut and new ones planted to replace them. The people should also be informed of which trees will be used to replace the current palm trees. If the Laborie Village Council with the National Conservation Authority and Laborie Development Foundation (LDF) decide to proceed with the plan to cut the trees at the Rudy John Beach Park as planned without public consultation I feel that the people of Laborie should protest this decision so that this precedence is not set within our public spaces.

I was informed that after much public outcry the sign has been removed and the Village Council is currently exploring other options to manage those trees.