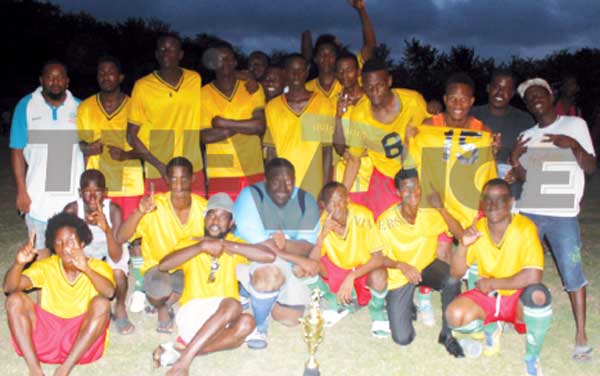 THE curtains came down this past weekend on the annual “Davy Thomas” Knock Out Football Tournament played at the Wenn Playing Field with On The Rock Strikers out of Dennery emerging as champion when they defeated P.Y.O. from Mon Repos in a penalty shoot out 4 – 1.

In front of a massive crowd at the grounds, On the Rock Strikers No.4 Damien Edwards put P.Y.O. ahead when he netted an own goal in the 13th minute of play from a ball that was crossed from outside the box from the southern end of the field. In attempting to clear, the ball eluded his goalkeeper to send P.Y.O. supporters into a celebration and lead at half time.

On the resumption, the boys from Dennery stepped up the pace, but the P.Y.O. defensce was equal to the task clearing everything close to goal. On the Rock Strikers No.15 Garvin Reggie’s right foot shot in the 77th minute eluded P.Y.O’s. second string goalkeeper to hit the back of the nets, to the delight of the many supporters from Dennery and that was how it stayed up until regulation time.

The competition commenced with 16 teams from the communities of Dennery, Mon Repos, Micoud, TiRocher and Desruisseaux.

The tournament is held annually in honour of the memory of the late Davy Thomas,a talented cricketer and footballer from the community of Mon Repos.