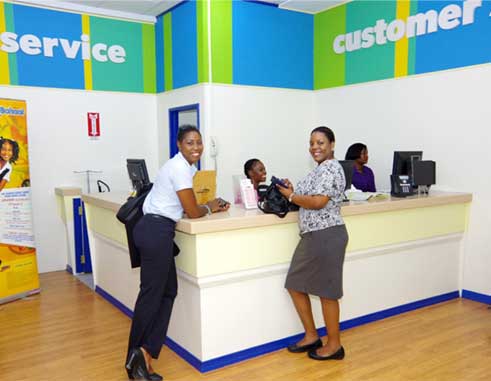 A new in-store deli, modern décor and upgraded equipment, spacious produce areas, and a wider selection and variety of products including fresh meat were some of the enhancements which greeted customers when the two Super J stores (La Clery and New Dock) reopened last week. On entering the stores, hundreds of delighted customers were eager to experience the modern facilities.

The transformations to the stores are part of a planned programme of upgrades, scheduled to take place across the eleven stores that are part of Consolidated Foods Ltd. (CFL).According to Martin Dorville Managing Director, CFL, this strategy is in direct response to the changing face of retail and evolving customer expectations. He used the opportunity at the official reopening to thank customers for their patience and loyalty during the past five months of renovations and eventual store closures in July.

“We continue to be mindful of our customers’ needs and allow their suggestions and recommendations to help shape our business strategy. The remodels were preceded by various customer surveys which helped to inform some of the new features which have been added. I know you will be very pleased by the dramatic changes which await,” Dorville told customers during the brief ceremony which preceded the ribbon cutting.

The enhancements to the two stores cost EC $5 million. The approval of this investment by the Board of Directors of CFL (which is part-owned by the regional Massy Group) is a sign of confidence in the growth prospects envisaged for the business. Chairman of CFL’s Board of Directors, Thomas Pantin, who is also the Executive Chairman of Massy’sRetailLine of Business, was on hand for the celebration.

“Massy is very proud of what the St. Lucian arm of the business has achieved to date. The experiences thus far have only been wonderful. This investment was not just a January 2014 investment.It has to continue with our people, our Customer Service Management System and the development of the Massy store network throughout the region.We have embarked on a number of projects including the modernisation of our stores and the construction of new stores to facilitate the demand for convenience and high levels of customer care. I am pleased to indicate that we are moving into Guyana and Martin Dorville has been selected to head the project planning of this venture” said Pantin.

Guided by Massy’s vision to “become the Premier Caribbean Basin retailer, continuously extending our reach”CFL, which employs just under 1200 St. Lucians, expects to establish a unified standard of services, products and overall shopping experience across its stores island wide while broadening its scope of activities.

St. Lucia’s Prime Minister, Dr. Kenny Anthony, who is the Parliamentary Representative for Vieux Fort South and opposition M.P. Stephenson King of Castries North were among the dignitaries who attended both events. They each welcomed the transition to what they referred to as “their community stores.”

To mark the reopening, customers were treated to two days of exciting double points and the chance to win promotions,specials, product sampling and entertainment.

On January 1, 2014 the Massy Group became the majority shareholder of CFL which is the operating entity for CFL retail stores (Super J IGA Supermarkets, Mega J and glfoodmarket). The Massy Group owns and operates the largest food retail chain, Massy Stores, in both Trinidad & Tobago and Barbados. Massy owns 60 percent of CFL’s shares, the JQ Charles Group owns 30 percent, while over 200 of the company’s staff own the additional ten percent.