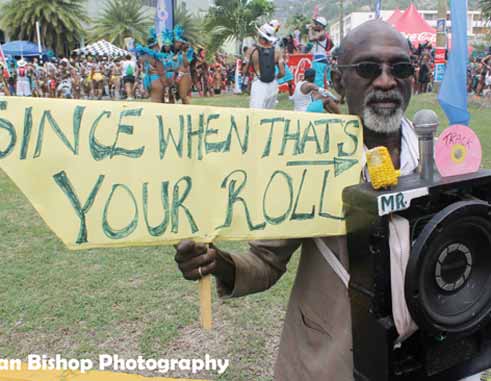 THERE wasn’t a dull moment at Monday’s J’Ouvert in downtown Castries as hundreds participated in the early morning jump-up.

Music, colour, pageantry and revelry were the order of the morning as revellers got ready for the Parade of the Bands later in the day.

Some J’Ouvert bands came out in full force while others dwindled in numbers this year. Nevertheless, the usual spirited vibes have definitely not disappeared. And lest we forget, the Ole Mas crew did play around a lot with their words this time, many of them capitalizing on Castries South-East MP Guy Joseph’s catchphrase, “Since when that’s your role?”

Back In Time Inc. captured another J’Ouvert Band of the Year title with their theme, “The Games We Played”, earning 342 points. (The band won last year for “The People Who Came”).

Moko Flix Entertainment’s “MokoJumbies – Out For J’Ouvert” placed second with 303 points and Mudsters’ “Peace… Love & Mud” picked up 246 points for third place. In fourth place was Triple D with 156 points for their theme, “J’Ouvert Is Our Time”.

In the Ole Mas category, Robert “Poule Bwa” Calderon’s “Emma Hold PM Post 4 Days” received 183 points to earn his first place. Carlton Ishmael was second with 181 points for “Police Tiff On The Rise” and Matthew Mark got third spot with 179 points for his “CSA See Through Mary – Yellow, Yellow”. In fourth place was Leslie Charles’ “Mamaguy In The House” which received 153 points.