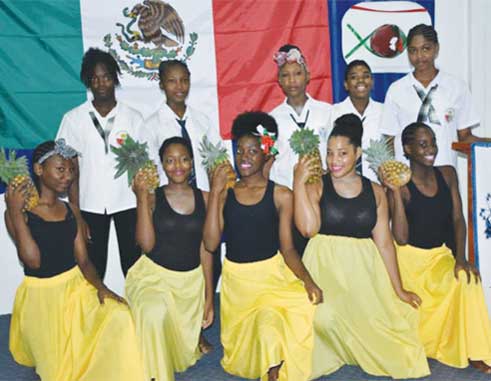 THE sweet sounds of Mexican music filtered through the halls of The UWI Open Campus last week as students from the George Charles and Marigot Secondary schools participated in a one week cultural workshop held at the Open Campus’s Morne Fortune site.

Sponsored by the Embajado de México en Santa Lucia (Mexican Embassy) and facilitated by Ms Kentillia Louis of the Curriculum and Materials Development Unit (CAMDU), the workshop aimed to provide District 4 secondary school students with a week of exposure to the dance and theatre traditions of Mexico.

After a warm welcome by Dr Veronica Simon, Head of the Saint Lucia Site, students were given an overview of Mexico by Ms MaiteNarváez of the Mexican Embassy, who identified a number of similarities and differences between Mexico and St. Lucia.

The rest of the week was devoted to exposing the students to Mexican dance and drama, as well as the crafting of items to be used in making their final presentation. Taking the students through their daily paces were Theatre Arts teachers, Ms Iva Satney (George Charles Secondary) and Mr Anthony Wilkie.

The workshop came to a rousing end on Friday July 10, with a short presentation ceremony during which students received their certificates and entertained the audience with a selection of Mexican and St Lucian dances. Members of the audience enthusiastically joined in, and were taught a few Mexican dance steps by the students.