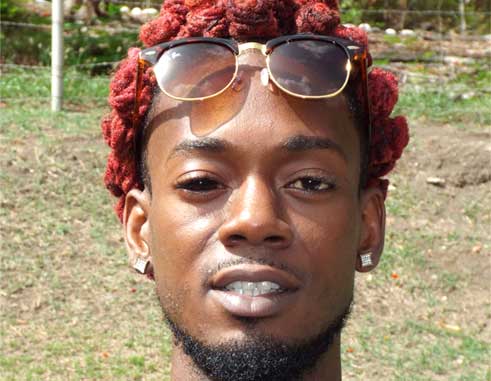 IT is no secret that today’s youth are in a class of their own. Just like every past generation, trends and actions would happen that push the envelope and leave the older generations scratching their heads.

Well, things are no different today except the levels being reached by the youth are beyond baffling even for the most open minds.

Today’s FITC is one of St. Lucia’s youth who pushed the envelope so far that he reached miles ahead of all his counterparts to become a “first” for the nation.

Upon first glance, 24 year old Jonathan Mathurin better known as J Buds is a lanky and stylish young man who clearly keeps up with the latest trends with his personally designed clothes, coiled red dread locks and super cool shades.

Mathurin made his name in 2012 as a promising soca artiste after he not only participated in the ever popular “Piton Soca Starz”, but went on to win. Since then, the young artiste hailing from Soufriere has continued to grow in popularity.

However, in January this year, Mathurin thrust himself into the spotlight but it wasn’t for his catchy music, it was because he had tattooed over 90% of his right eye…yes you heard right, he tattooed his eye…black.

Mathurin received some support from friends, family and fans but the backlash shadowed the support…even I had my concerns, so when he walked into The VOICE to see one of my colleagues, there was absolutely no way that I would let the chance to sit with him and pick his brains about his decision pass me by.

Although he got a grilling on a popular morning radio show, this FITC interview would be the very first time that Mathurin would have the opportunity to tell his side of this whole affair.

The VOICE: Why did you decide to tattoo your eye?

J Buds: It was always a vision that I’ve had for a long time. It’s just that I was scared and then seeing that Alkaline (a Jamaican dancehall artiste who similarly tattooed both eyes) did it, I really gave it some thought and so I did it.

The VOICE: But of all places to put a tattoo, why your eye?

J Buds: Well, I have tattoos all over my skin but the eye is very unique and that’s what I saw, one eye so I did it.

The VOICE: So you are definitively saying that Alkaline’s actions helped you make up your mind to do this?

J Buds: Well…yeah. I got the strength. I always had it in mind and since he did it, I realised it was possible.

The VOICE: Talk me through the process of one getting their eye tattooed

J Buds: It was a short and simple process like maybe 20 minutes. You had to be relaxed and then they massaged the ink in with a syringe and it’s some kind of plastic ink which is different from the normal tattoo ink because after a certain number of years, they said it breaks into the bloodstream so I might have to get it done again if I decide to leave it that way.

The VOICE: Didn’t you then and still now have any concerns about affecting your eye sight or even losing it?

J Buds: Yeah, back then I was worried about getting blind but then I figured since I only did one eye, I might as well just leave it that way because my left eye is still there even if my right eye goes dead.

The VOICE: Now let’s talk about the backlash. What was that like?

J Buds: Yeah, people were saying all kinds of things…bad things, I don’t even want to say but it was nothing because I expected that, even from my mom. But now she’s comfortable with it…she can actually look at me now

The VOICE: How did you cope with all the negativity?

J Buds: Well, I just had to cope because I’m comfortable. I made my decision and you know, people will always say what they have to say. They have their free will to speak so I’m comfortable.

The VOICE: Did you get any positive feedback?

J Buds: Yeah, a lot. Some of them said well it’s my decision and that they actually like it. They thought I would look ugly but I don’t. Since it was my decision, they supported me all the way.

The VOICE: Apart from your eye, how many other tattoos do you have?

J Buds: I don’t know. I have on my arms, chest…most of them are hidden though because I didn’t want to expose everything.

The VOICE: Why are you so fascinated with tattoos?

J Buds: I love it…it’s an expression, an artistic expression.

The VOICE: So are you trying to speak out or send a message through your body art?

J Buds: There’s no message. It’s just me doing what I feel I love. My body is my canvas.

The VOICE: Ok, like everyone else, when I first saw what you did, I too had an opinion. I thought, here is this young guy who has just thrown away his chances of getting to any respectable employment position in his future should he not make it in St. Lucia’s fickle music business. With that said, has this ever crossed your mind to find alternative employment and do you have a plan B?

J Buds: That was the plan before but I actually stopped to pursue a music career. I don’t think my tattoo would be a setback. I’ll just open my own business…that’s why we have something called investment and I’m in the proper position to invest.

The VOICE: So can we expect to see any more outrageous tattoos adding to your body of work?

J Buds: It’s a tongue tattoo but I won’t show you because it’s not done yet. It’s still in the works but hey, I’m just living. I’m comfortable as you can see. I’m not being forced to do anything, it’s just me doing stuff. I have nothing to prove to anybody, it’s just me living…I’m a young guy and young people do dumb stuff at times but I’m just living life.