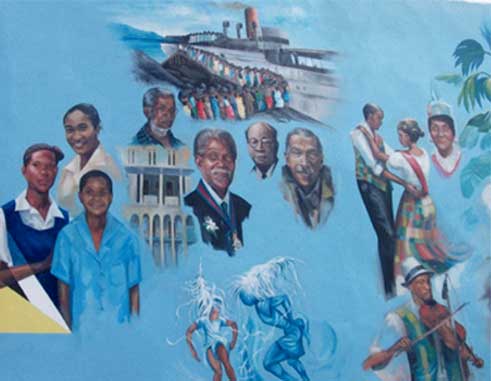 A giant mural measuring 6,000 square feet, the work of artist Alwyn St Omer has added some aesthetic value to one of the many entrances to Faux a Chaud.

The concept for the new mural is centred on national unity and peace, having former St Lucian leaders Sir John Compton and Sir George Charles and the national flag as central figures surrounded by other sons and daughters who were outstanding in their various fields.

The portrayal is in fact based on the motto, “The Land the People the Light”.

St Omer, the eldest son of the legendary late Sir Dunstan St Omer is yet to put a figure on the cost of this project but says that merely preparing the site cost as much as $75,000. The project itself is largely being financed by the private sector.

“When I designed this wall, I wanted a visitor to Saint Lucia to have an idea of who we are as a people,” St. Omer told The VOICE . “Many times our island is portrayed as just sun, sea and sand, but we are a people of culture. We have our own way of life and national pride.” 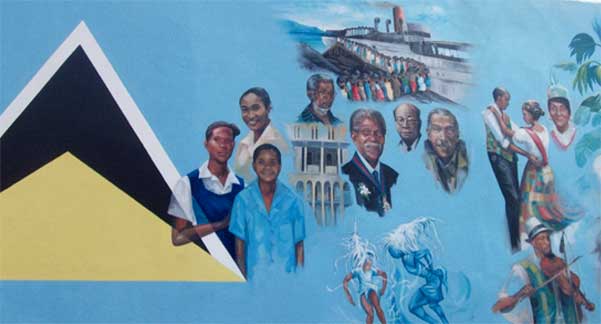 The artist said he is hoping that the wall serves as a symbol of national unity and national pride. He also hopes that Saint Lucians especially see the wall as more of an apolitical symbol – “it’s not a Flambeau thing or a Labour thing.”

The close to 100-foot wall brings a sense of vibrancy to a community that makes the news mostly for the wrong reasons. While many walls are built to divide, the artistic work-in-progress spearheaded by St. Omer seeks to bring people together in unity and peace.

The new mural was achieved through the invaluable assistance of corporate clients who helped in cash or kind and the Ministry of the Creative Industries. Collectively, their contributions helped towards achieving this landmark artistic venture of art in public spaces and by extension assisting in creating employment, working toward the unity of our people and by extension, the beautification of the city of Castries.

St Omer said the idea to finance the new mural works through sponsorship, came from his wife Marcella after the City Council, the sponsors of the original works, were unable to finance the project this time around. “At first it seemed impossible considering our present economic climate, but after countless project proposals, phone calls and meetings the project was realized”, he said.

On commencement of what was initially thought to be restoration works; attempts to save the original mural artwork proved futile as the entire wall surface had cracked, and in the end, the entire wall surface and old artwork had to be torn down. Thus, all initial estimates of costs went out the window. Nevertheless through miraculous corporate intervention, a new surface was re-plastered and primed.

Added St Omer: “Having now achieved a beautiful new surface, a modified version of the old mural was composed for the new mural. So, I started by drawing in all the figures and illustrations and preparations were made to bring in select talented young artists, to help towards creating a masterpiece of the ages”.

The main artists were St Omer and Sabrina Romulus, and supporting artists were Tyrone Steel, and Julio St Omer. Painting the mural also involved the assistance of a crew of scaffolding assistants, Martin Louis and Owen Andrew, among the many.

“Working on the wall at sometimes great heights and in traffic, would not have been possible if not for their help, constantly, positioning and re-positioning of the scaffolding to allow painting”, St Omer explained.