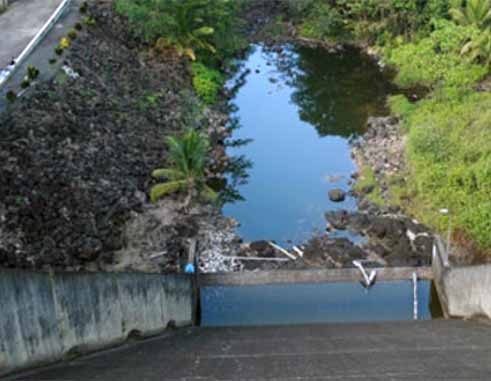 THE Caribbean Development Bank is supporting St. Lucia’s efforts to deliver a reliable, climate resilient supply of potable water to the northern districts of the island by providing US$14.8 million to fund improvements to the John Compton Dam and operations of the Water and Sewerage Company of St. Lucia (WASCO).

The supply of potable water from the dam has been unreliable with more than 93,000 residents and the many businesses that operate in the northern districts having to endure severe water shortages every two to three years. With shortages due to the underperforming dam, residents, hotels, schools, and medical facilities within the serviced area have had to cope with disruptive rationing.

When heavy rainfall occurs, another problem is created as water courses are susceptible to siltation which impacts significantly on water quality. Heavy rainfall has, on occasions, also triggered landslides which have damaged intake structures and transmission mains, leading to water shortages to major systems.

The Government of St. Lucia is seeking to arrest this problem through a programme of infrastructure upgrading, as well as by boosting the organisational capacity building of WASCO. The project includes removing and disposing of sediment from the dam and installing monitoring instrumentation. WASCO will also be strengthened by measures to improve: its financial management; capacity to plan for climate change impacts, and ability to incorporate gender specific needs in its planning. A rainwater harvesting initiative will also be undertaken in the community of TeteChemin.

“The John Compton dam has been significantly affected by siltation since the 2010 catastrophe. This project will restore the capacity of the dam and address the causes of siltation. This, together with the improvement of the operations of WASCO, will create long term benefits to St. Lucia. With the dam back to full capacity we expect that rationing and shortages may occur every one in ten years, instead of its current rate of two out of every three years,” said Andrew Dupigny, CDB’s Director of Projects (acting).

CDB’s 2011 St. Lucia Gender Assessment, identified that women, men and children who do not have basic amenities, including piped water in their homes, spend an inordinate amount of time fetching water, and on household work. In some instances, these difficulties place pressure on the time available for breadwinners in the household to actively participate in the labour market and thereby contribute to economic growth in the country. Unreliable water supply strains household budgets as residents either have to purchase bottled water or pay for water fetched from sources outside of the community. Such inconveniences lower productivity in ways such as late arrival for work and school. In some cases, schools are closed early because there is no water.

The proposed improvements to the water system should significantly reduce these problems and move St. Lucia even further along in the process of providing safe drinking water to 100% of its population, especially those comprising the diverse communities of Castries and in the north of the island.

“The approval of this project is significant for St. Lucia because the dam is right now running at less than 50% capacity and has about one month’s supply of water. Improving the performance of the dam is critical to expansion of economic activity in St. Lucia,” said Tracy Polius, Permanent Secretary, Department of Planning and National Development, Ministry of Finance, Economic Affairs and Social Security and a member of the CDB’s Board of Directors.