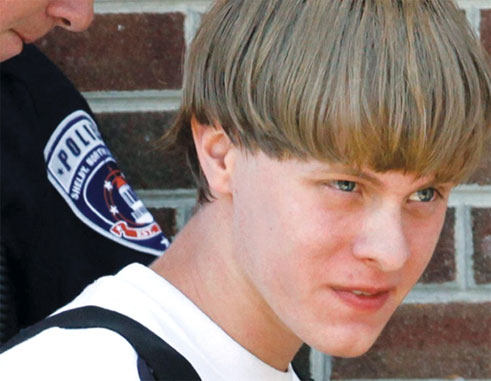 ON Wednesday June 17, 2015, as is their custom, parishioners at the famed African-American, Emanuel AME Church in South Carolina gather at 6:00 p.m. for Bible study. About two hours later a young white male walks in and sits at the back of the room. Parishioners invite him to join them. But unknown to them the visitor has a more sinister and deadly purpose in mind. He has come to kill them; not to sit and pray with them. About an hour later, after uttering a racial epithet, he pulls out a semi-automatic pistol and, walking up to each of his victims, he shoots them at point-blank range. Eight parishioners die on the spot; one later at a hospital nearby.

The events at the Emanuel AME Church brought to the fore another event which took place on New Year’s Eve in 2000 at another church thousands of miles away when Kim John and Francis Philip entered the Minor Basilica in Castries armed with flaming torches, machetes and sticks. With the same deliberateness of Dylann Roof, they attacked and killed Fr. Charles Gaillard and Sr. Theresa Egan and maimed and burned about a dozen others. Beyond the fact that both incidents happened in churches, in both cases the attackers were driven by one common ingredient: PURE, UNADULTERATED HATRED!

Roof’s despicable, heinous act evoked anger, sadness and confusion and a welter of questions, including that which provides the title for this commentary: just what have African-Americans done or are doing to evoke such unmitigated scorn and venomous hatred from generation after generation of non-African-Americans, particularly white Americans?

The late, great Nelson Mandela believed “no one is born hating another person because of the colour of his skin.” Dylann Roof was not born with such hatred in his DNA. He nurtured it. He had at least one black friend with whom he spent a lot of free time, but not even that friend was aware of the deep-seated loathing Roof had espoused for black Americans in his manifesto and on his website and his admiration for the supremacist policies and actions of Nazi-era Germany.

Sylvia Townsend Warner writing in her diary in 1954 saw a relationship between hatred and stupidity. The stupid she thought, have “ so much more time and energy to expend on hating. They build it up like coral insects.” Dylann Roof was stupid enough to buy into the ideology of the nearly 800-white supremacist groups that the Southern Poverty Law Center (SPLC) says are active all across of USA. In South Carolina alone, there are 19 such groups, including the Loyal White Knights of the Ku Klux Klan and the League of the South, that feed at the table of hatred of black people, Latinos, and others deemed inferior to them.

Roof’s act is but the latest manifestation of the same ideology that gave birth to slavery and fanned the winds of rampant racial segregation in the USA up to the late 1960s, and up to the late 1980s in South Africa and Rhodesia. The current evidence supports the view that the US Civil War and World War 2 were mere exclamation points in the sick, silly narrative of supremacists. Their battle has not stopped and cannot stop because of the self-fulfilling and regenerative nature of supremacist thinking. As we have seen, there are many in positions of influence and authority across the US, including in Government, and in the law and justice system who act out the supremacist beliefs of Dylann Roof and the KKK, albeit in more sophisticated ways, but with no less telling effect.

What have African-Americans done to deserve such hatred? The short answer is ABSOLUTELY NOTHING! But the hordes of open and closet-supremacists who have convinced themselves that African-Americans are “taking over their country” and who want to “take their country back” don’t care about that. They don’t care that the vast majority of the 45 million African-Americans in the US today are descendants of 11 million slaves who were uprooted from their homeland, from their families and their cultures and brought to the US against their will. They are outraged by any suggestion that the US would not be the superpower it is today, were it not for the sweat and toil of black slaves.

Nearly three centuries after slavery was abolished, the life of the negro race continues to be beset by injustice and oppression and hardship. Legally, he’s been declared equal to the likes of Dylann Roof, but as far as Roof is concerned he did not write that law; and by his thoughts and actions he has decided to challenge it. African-Americans have been lynched by the callous hands of bigotry and “kicked about by the brutal feet of humiliation.” They’ve endured unceasing pain. They’ve been arrested, convicted and imprisoned for the slightest infraction. They’ve survived the police dogs, fire hoses and truncheons of Bull Connors. Their homes and churches have been fire-bombed. Their bright and exemplary leaders – Medgar Evers, Dr. Martin Luther King Jnr., Randolph King, Roy Wilkins, Malcolm X – have been murdered. They have been demonized and stigmatized as being lazy and lacking in ambition. Now, they are being denied the right to vote by all kinds of weapons such as literacy tests, physical violence and economic intimidation.

How have African-Americans reacted to being the victims of such unrelenting violence?

With amazing grace, dignity, and with a determination to excel despite the hardships. African-Americans continue to make their mark in nearly every field of endeavour – science, politics, government, commerce, music, sport, research and development, academia and the military. Even as blacks fought in the Second World War, they found they were getting a raw deal. They found that Nazi prisoners-of-war were enjoying facilities such as railway restaurants and dining cars that they were forbidden to enter. They were given poor training and poor equipment and sent to the least promising parts of the battlefield. Even as they fought on the battlefields, their families who worked in factories that produced military equipment for their use, faced racial segregation. Yet despite this they excelled and performed heroically.

A people can only take much, and African-Americans have taken far more than most. Most historians now agree that at least 12 million slaves were forcibly removed from the African continent between the 15th and 19th century. Of that number 10 to 20% died on board ships. The death toll from 4 centuries of the Atlantic Slave trade is estimated at a staggering 10 million people. By contrast 6 million Jews are estimated to have died in the Holocaust between 1933 and 1945. The persecution of the Jews declined significantly after the Second World War. But there seems to be no end in sight to the persecution of African-Americans. Of the 6,222 reported hate crimes recorded by the FBI in 2013, 46.9 percent were racially-motivated.

As the legendary Dr. Martin Luther King noted in a letter written in December 1955, “…there comes a time when a people get tired. We say to those who have mistreated us so long that we are tired of being segregated and humiliated… we have no alternative but to protest. For many years we have shown amazing patience. We have sometimes given our white brother the feeling that we liked the way we were being treated.”

Could that be it? Could it be that by their silence African-Americans are encouraging their oppressors to continue their oppression?

Martin Luther King decided that non-violent protest was the way to go. This strategy brought unprecedented benefits, including through the historic 1963 Civil Rights Bill. That Bill gave new powers to the US Attorney-General to intervene to protect citizens rights; it outlawed segregation in public places and in most places of public accommodation such as hotels and motels; it forbade racial segregation in Federal undertakings; it authorized the Office of Education to help peaceful school desegregation with advice and money; it extended the life of the Civil Rights Commission and created an Equal Employment Opportunity Commission.

But it was not enough to stop the rise of the KKK in Mississippi. In fact, its passage in 1964 was due only to the outrage sparked by a KKK-orchestrated campaign of bombing of dozens of black churches and the murder of three young civil rights volunteers. No one was ever convicted for these murders.

Amidst all the progress that African-Americans have achieved since the abolition of slavery, it seems like little has changed. Yes, Americans twice elected as their President, a man of mixed race; yes there are many black mayors and governors across America; yes there are more inter-racial marriages than before. Yet racial discrimination is as rampant and pernicious as ever. African-Americans are more likely to be arrested and jailed for longer periods for the same crimes, as white Americans. The income gap between the two groups is getting bigger. African-Americans live in the worse areas. Perhaps, it was facts such as these that prompted Thurgood Marshall, the first black Justice of the US Supreme Court to speak the following words in a commencement address at Howard University in 1978::

“Be careful of the people who say, “You’ve got it made. Take it easy. You don’t need any more help” Today, we have reached the point where people say “You’ve come a long way.” But so have other people come a long way. Has the gap been getting smaller? No. It’s getting bigger. People say we’re better off today. Better off than what?…Don’t listen to that myth that inequality can be solved or that it has already been solved…or that it has already been solved. Take it from me. it has not been solved.”

Marshall’s comments could well be applied to the scourge of racial discrimination and race-based hatred in the United States of America. It has not been solved. It will never be.