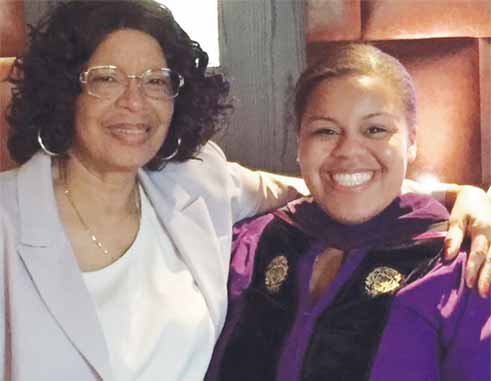 Stories are commonplace about people who struggled and achieved in the face of adversity, but one story is usually much different from the other.

Samantha LucilliaEvei is a 27 year old American, born in Boston, Massachusetts to St Lucian parents, and her struggles for academic success are about to pay off big time.

Now a qualified attorney she will be moving to Washington D.C. next month to get settled before beginning work for Ernst & Young, a top accounting firm in the U.S. , which has offices in St Lucia.

It’s like fairy tale story, considering the trials that Samantha has been through in her young life thus far. In 1977, her mother Lucillia Annette Evei of Balata, who studied hotel management in Germany, left St. Lucia for the United States after working as a social director at the Cariblue Hotel (now Le Sport) and married another St Lucian some years later. The union produced Samantha in 1988.

Samantha’s parents divorced shortly after her birth and she confesses that she knows little about her father. But she is proud of her St. Lucian roots. “Although I was not born on the island, I consider myself a St. Lucian”, Samantha said.

She spoke of her early education attending High School in Atlanta, Georgia where she earned a college preparatory degree with distinction in 2006. She said: “The specific programme I went through in high school was called The International Baccalaureate. It was designed to prepare students for college on an advanced international level so that we would be ready to compete with any student in our grade around the world”.

After High School, Samantha earned a Bachelor of Arts degree in journalism from the University of North Carolina at Chapel Hill. Completing college in 2010, she took a year off from school to do community work in Atlanta helping to get homeless people off the streets which, she said, was no easy task.

Last month, she graduated from Northwestern with an LL.M in Taxation with Honours.

What makes Samantha Evei’s story special, however, are the circumstances under which she was able to score these academic successes and the strength which she drew from her mother, at a time when her father was gone.

She explained: “I believe my mother wanted me to tell my story because it is a story of perseverance. Although I successfully completed all of my degrees and obtained the job of my dreams, it was no easy task.

“For the entire first year of my college education I was unable to afford any of my books, but I didn’t let that stop me. I would borrow classmates’ books, and spend the entire weekend hand-writing out every single problem and answer that I knew the professor would be teaching that semester, and created my own book on loose-leaf paper. I couldn’t even afford to take the book to the library and photo-copy the pages. I used to hide food from the cafeteria in my pocket and save it for dinner at night because I couldn’t afford to buy food, and I technically had no meal plan, so I was not even supposed to be allowed in the cafeteria”.

But that was not all. While she was at Marquette Law School, Samantha received eviction notices to get out of her apartment because she couldn’t afford the rent.

She added: “Throughout all of these obstacles there were times where I wanted to just throw in the towel and just give up. Just go home because it was too hard. But I never lost the faith and I accomplished all of my goals. My mother would always remind me that I could do anything I put my mind to. She really is the reason for all of my success. I know that God only puts his strongest followers through the hardest tests, so I believed the whole time that He wasn’t going to let me fail”.

Samantha said she wanted her story to provide inspiration to everyone who takes the time to read it, and let them know that “there is always a light at the end of the tunnel. Just keep working, and keep the faith. The Lord will always guide you through”.

So next month, Samantha LucilliaEvei’s march continues as she takes up her “dream job”. As a Senior Tax Associate at Ernst & Young, she will be working with Fortune 500 companies helping them structure major mergers and acquisitions.
(By Guy Ellis)