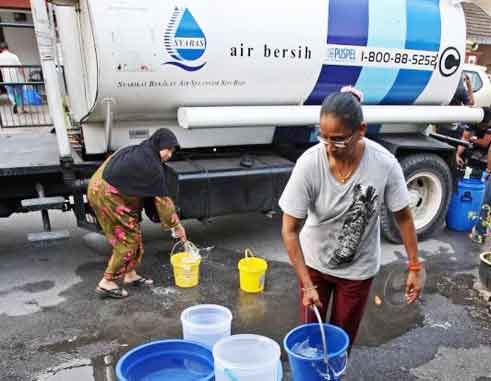 THERE is no reason for water rationing at any time. Seriously. The thing is that you have to know how to make it work and accept new ideas and technology. It is affordable also. The problem is that unusual ideas finds lots of resistance until there is no alternative left, and then it is hailed as a genius idea. What do you think that astronauts drink aboard the International Space Station? There is a severe drought up there; worse than on St.Lucia! It doesn’t rain on a space station and the supply space ships don’t bring tanks of water. So, how do they survive? All moisture released aboard the space station is captured including, yes, you may have guessed it; I said ALL. It is then recycled and reused to provide astronauts with potable water. It is no rocket science.

“The water tasted as good as any I’ve had out of a bottle and having studied the engineering behind it, I would happily drink it every day. It’s that safe.” Guess who said that? Does the name Bill Gates ring a bell? The founder of Microsoft and according to Forbes Fortune 500, the richest person on the planet. What planet? Did he go to space? No he didn’t! With almost 80 billion US$ he is the wealthiest man on Earth. If he is that rich, then why is he is not dinking Vittel or some exotic boutique water? ‘Typical rich eccentrics,’ you may say, ‘don’t know what to do with their money.’ Bill is not an oddball. He is extraordinary and he is smart! He self-made his source of wealth whilst being a university drop-out.

Gates has pursued a number of philanthropic endeavours, donating large amounts of money to various scientific research programmes through the Bill & Melinda Gates Foundation. The Foundation aims to improve sanitation in poor countries. A few years ago, Bill Gates asked people to try to reinvent the toilet as a possible solution to the problem. One of the results was the development of a machine called ‘Omniprocessor’. It converts raw sewage into clean drinking water, electricity and ash, and it produces enough excess energy to power itself. NASA uses a different method for its space station. So what may have sounded wicky wacky when you started reading, absolutely is not. It could even be part of a solution for Saint Lucia. How come?

Imagine! The people of Castries can produce potable water. They cannot actually produce it but they can rather be the source of it. As a rule of thumb, sewerage per capita is essentially the same as water use. Castries discharges approximate 1.5 million gallons of sewage and waste water on a daily basis. About half of that number thus 750,000 gallons can be returned as potable water. “Easily,” I was told by an expert. It could be 1 ½ times as much, thus something in the area of 1 million gallons. It all depends heavily on what technology of filtration is used. Doesn’t that make you think in a time when water is rationed? So where does the brew flow right now?

‘Castries is served only with a wastewater collection system which discharges raw sewage into the marine environment via a near shore outfall,’ the United Nations Environment Programme – Caribbean Environment Programme (UNEP-CEP) says it so diplomatically. Where is that ‘near shore out fall’? Less diplomatic about it was an article in THE VOICE on April 4 with the headline: ‘Excessive Pollution in Castries Harbour’. It says: ‘For the past thirty years several thousand gallons of raw sewer has entered Castries Harbour in the eyes of all and sundry. This cannot be right….’ No, that isn’t right, because using the above figure over a 30 year period it amounts to 16 billion gallons. To round it off how bad it is, a comment from a Dutch master-diver who worked on the recent salvage of the sunken tugboat. He describes the water condition down deep as follows: “It smells bad, you normally don’t smell anything, but (here – Ed.) you can smell through your helmet that it is the waste of human beings.” Badabing, bada boom!

To summarize it, something that could be precious in a time of water rationing, goes down the drain into an open toilet bowl. Let’s face it. How much sense does that make? ‘You never miss the water till the well runs dry’ is a proverb that means people are not grateful for what they have until they lose it. What stands in the way of drinking reclaimed water? It’s called the ‘Yuck Factor’. Psychologists say the aversion is deeply held and difficult, but not impossible to overcome. The disgust comes from intuitive concepts of contagion. However that concept decreases with familiarity, and desperation overrides anything for survival, according to these specialists. There may still be enough ways to produce drinking water. But, water for the laundry becomes critical. Forget car wash. No water for industrial purposes either. What if there is not enough water for agricultural purposes? Imports and increasing prices! Loss of local farmer’s revenues. What does water rationing do to a tourism industry? What if the greens on the golf course turn yellow? Recycled water is a solution. Rainfall you cannot control. But reclaimed water is a dependable, locally-controlled water supply unless the whole population of Castries is going on vacation, and flushing is no more.

What does a waste treatment plant cost? For a capacity of 15,000 people, it takes a capital investment of somewhere between 10-12 million UD$ at least. It can take about 8-12+ months to build. It requires land acquisition and excavation. Not to forget that a pipeline needs to be built from the current ‘near shore out fall’ to the location of the new treatment plant. ‘Is there an alternative?’ It all depends on whether you have a panoramic vision. ‘Tell us about it anyway!’

Saint Lucia’s problem is not unique. It is a global problem and it affects billions of people. That means, there is a need and a huge market for a solution. What if Saint Lucia turns its own problem into an opportunity? Create an industry that can make the economy flourish and contribute as much to the GDP as currently the tourism industry on the island does. It could reduce unemployment and increase wealth. ‘Tell us more!’ I’m not going to. ‘Why not?’ Because it scares the heck out of me that someone else walks away with the idea. That would leave Saint Lucia just with its treatment plant and the lucrative opportunity goes elsewhere. There are moments when a man has to hold back on what he says. ‘But please, just tell us something about the opportunity?’

If I had to list all the areas where drought can cause a humanitarian crises, where even without the drought there is a lack of drinking water, plus all the areas where that lack proper sanitation and water treatment, this newspaper would be filled front to back. According to the estimates of the WHO/UNICEF Joint Monitoring Programme for Water Supply and Sanitation, 36 per cent of the world’s population – 2.5 billion people – lack improved sanitation facilities, and 768 million people still use unsafe drinking water sources. It doesn’t mention any drought. That comes on top of it.