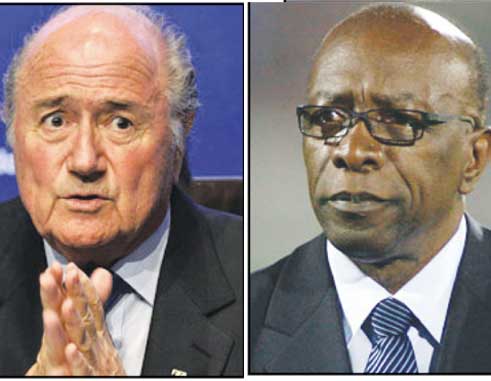 ABOUT three years ago, then Security Minister of Trinidad and Tobago Jack Warner – accompanied by his wife – caused a bit of a stir at Miami International Airport when he presented his passport to a Customs and Border Protection (CBP) officer. The officer, who happened to be a huge football fan could not believe his good fortune at having the former CONCACAF President and FIFA Vice President standing before him. He enthusiastically shook Jack’s hand and introduced him to his colleagues in adjoining booths. Jack’s pride at such unrequited adulation was obvious and he reciprocated that attention with a quick history of his many decades of good work at FIFA.

Now, one imagines the USA is the last place Jack Warner would want to be. Based on his repeated claims of innocence of the splurge of corruption charges leveled at him over the past four years, and more especially over the past month, Jack’s return to the US will likely be involuntary and shackled by shame. The FBI will probably save him the embarrassment of another meeting with that CBP officer in Miami and will likely take him directly to New York, where recently the U.S Justice Department took an axe to an alleged thickly-matted FIFA beanstalk of kick-backs and bribes.

Jack Warner’s fall from the FIFA beanstalk makes for a telling re-write of the timeless fable in which Jack brings down an angry giant whom he had robbed of his magical hen that laid golden eggs and his magical harp. Now, the giant USA has caught the scent of the erstwhile Caribbean man and is trying to use its long arm to rein him in.

Even as an imposing tree of evidence of alleged malfeasance grows against him, Jack Warner continues to protest his innocence. And consistent with the rules of natural justice he must be presumed innocent until a judge or a jury of his peers can prove his guilt. Unfortunately, for Jack, it’s his former peers such as the bellicose Chuck Blazer who for the time being is spilling the beans to the giants that are seeking to bring him down.

Jack insists he did not accept any bribes while he served in CONCACAF and FIFA. His accusers – who include spurned bidders of FIFA World Cup finals venues say he asked them for considerable sums of money in return for assurances of his vote and those of others, presumably those under his cloak of influence.

At the root of claims of malfeasance is a $10 million payment made by the South Africa (SA) to Jack through FIFA and CONCACAF. SA’s Sports Minister says the money was a gift made under his country’s Caribbean Diaspora programme for the development of football in the region. The US Justice Department says the money was not used for this purpose. The BBC claims it can show that money was laundered by a supermarket in Trinidad and Tobago to accounts controlled by Jack.

But any rational thinking person would ask: why would a country like South Africa: faced with crippling poverty; whose football infrastructure is in no better shape than those in many Caribbean countries; and which is about to host an expensive World Cup give away $10 million just like that? Who on Gods’s green earth gives that kind of money for any cause and does not care whether it is being properly spent? Moreover, why was nothing said publicly about this gift, whether by South Africa, FIFA, CONCACAF or Jack. Why the secrecy?

A FIFA official says FIFA merely facilitated the transfer and that FIFA was not asked to ensure the money was properly spent. So that leaves SA authorities with many questions to answer especially to tax payers.

While there is no evidence to suggest the grant was not genuinely made, it can be said that the South Africans were at best, terribly naive and at worse, incredibly reckless in not ensuring that the money was properly used and accounted for. And it would appear too that if Jack Warner did receive that money – as claimed by the BBC – he too did not expect he would ever have to account for its use.

Now, if SA envisaged no accountability role for FIFA and if FIFA saw no such role for itself, then it is reasonable to ask: why was the gift not made directly to CONCACAF or, for that matter to Jack? Could it be that FIFA was wittingly or unwittingly used as the first point in a sophisticated “pass through” arrangement intended to legitimize the transaction? And how many other such transactions did FIFA facilitate?

The whole scenario raises serious questions about the degree of transparency and accountability that clothes FIFA’s affairs. Here, it’s Interesting to note that until his arrest a month ago, Jeffry Webb – Jack’s successor at FIFA and a fellow “indictee” in the FIFA Hall of Shame was a member of FIFA’s Transparency and Compliance Committee. Clearly, this cannot continue and FIFA President Blatter must accept responsibility for this unsatisfactory state of affairs.

In recent days more disturbing news has emerged about a sleight-of-hand that led to Morocco being denied the opportunity of hosting the 2010 World Cup that eventually went to South Africa. It’s alleged that when the votes were originally tallied, Morocco had won by two votes but by the time the official announcement was made South Africa emerged as the winner. If these allegations are proven true then it presents the clearest evidence yet, that not only is FIFA rotten at its core but that this rottenness starts at the very top.

In his defense Jack has posed a combination of loaded questions and subtle hypotheses. For example, he asks: if he can be indicted for corruption why isn’t SeppBlatter also being indicted? And why are all the “indictees” from the developing world? And he also makes a distinction between a “bribe” and a “gift” insisting that he’s never accepted the former. Moreover, he suggests that the giving and accepting of “gifts” is the norm in FIFA.

The first question can only be taken to mean that Jack knows reasons why Blatter should also be indicted. Also, it implies that Blatter is being spared because he is white and is from the “developed- world” membership of FIFA. But based on his own pronouncements, it might also be argued that it’s Jack who is giving Blatter a “pass” by not making good on his threats and promises to reveal all that he knows about the inner machinations in FIFA. Jack now says he won’t be spilling any beans on Blatter.

For me, however, Blatter’s initial denial that he knew nothing about the SA transfer only to later admit that he knew of it but not of its “initiation” is not due to failing memory.

But what are we to make of Jack’s distinction between a “bribe” and a “gift.” Black’s Law Dictionary defines bribery as “ the giving, receiving, or of an item of value to influence the actions of an official or other person in charge of a public or legal duty.” As the 2002 Salt Lake Winter Olympics scandal has shown, proving bribery is not an easy matter. The US Justice Department brought charges against several International Olympic Committee (IOC) members in relation to that scandal but was unable to get any convictions.

So long as SA sticks to its story that its gift was not a bribe – and it’s not in its interest to admit otherwise – then the only allegation that can be thrown at Jack is misuse of a gift. But who apart from SA has the “standing” to press that charge?

Outside of FIFA bribery is frowned upon as it carries the expectation of a favour from the recipient. In many countries it is illegal for government ministers and public servants to accept gifts. In others, gifts over a certain value must be declared. However, in multilateral relations the lines between gift-giving and bribery are perpetually blurred. Within the UN votes are frequently “bought” and “sold.” For decades, environmentalists have alleged that Japan bought the votes of some OECS members within the International Whaling Commission (IWC) in return for grants-in-aid. While these allegations have not been proven, this does not invalidate the conclusion that not only is the “quid pro quo” culture of gift-giving very much alive and well; it is kicking! How often have we heard of Parliamentarians switching political allegiances in return for Ministerial appointments; or of party campaign financiers receiving influential appointments to Boards of state corporations? Even now, Jack can point to at least one occasion when he did a favour for a fellow high-ranking politician.

As Saint Lucia’s Papa Vader reminded us recently “we living in a 4-a-cut society.”

In the case of FIFA the obvious solution would be to outlaw gift giving of any kind and to allow decisions to be made based on the merits and demerits of a particular matter through a body subject that is oversight by an independent external body.