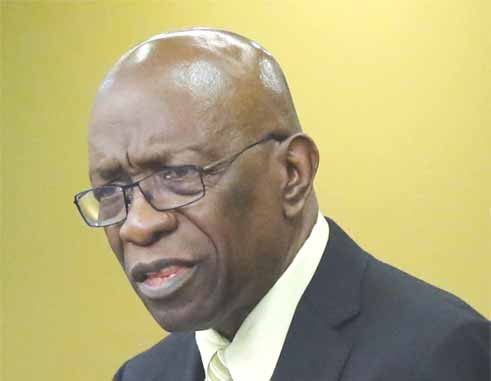 IF anyone here or across the Caribbean didn’t fully understand what people mean when they say “The world is a village”, just point them to the unfolding FIFA extravaganza. It all started with the US and the UK wanting to go after FIFA President SeppBlatter, who they blame for losing their respective bids to host future World Cup events to Qatar and Russia.

The two major western states took their loss so badly they decided to get back at FIFA through SeppBlatter. They spent years gathering mud on him and waited for the right time to throw it at him: on the eve of his bid to be elected for a historic fourth term, several top FIFA executives were arrested or detained around the world following a live broadcast of US attorneys unveiling charges in New York against everyone around Blatter.

The Americans have decided to sink SeppBlatter, so they went after him — hook, line and sinker!

But here’s the global village rub: in going after the FIFA President, the US picked nearly all the main men around him. And in so doing, one of the main targets was Jack Warner, who, for all intents and purposes, was – and still is – regarded by some as ‘the Caribbean’s SeppBlatter”.

So, the US goes after Blatter and ropes in Jack Warner. Blatter then sounds like he’s ready to try to come clean in the face of all the dirty charges being thrown at him by agreeing to go after the likes of Warner. The US then tightens the squeeze on Warner by issuing a global arrest warrant for him. Warner finds himself stuck in Trinidad, taken to court and unable to travel. His two sons have been snared by the US — and no matter how he tries Jack Warner has nowhere to turn to.

The global football gaze obviously turned to Trinidad & Tobago, where Jack Warner is more than just a rich FIFA official. An active politician, he was part of the People’s Partnership Government led by Prime Minister KamlaPersad-Bissessar and served both as Sports Minister and as Minister of National Security.

Warner and his Prime Minister eventually fell out and he left the government to form his own party, now serving as an independent member in parliament.

But elections are in the air in Trinidad & Tobago – and that’s where the politics of football got into the game. Prime Minister Persad-Bissessar let it be known she would not get into the way of those pursuing Jack Warner, who responds by saying if he’s going down he’ll take the whole house down with him. As a result, he let it be known that he would supply the US investigators with information of all he knows about FIFA deals involving SeppBlatter, all he knows about FIFA money being spent in this part of the world — and (here’s the rub) all he knows about FIFA money spent in the ruling party’s last general election campaign.

Now, anyone who knows anything about Caribbean politics yesterday and today will tell you that if anyone feels Jack Warner will go down alone that would be a wasted thought. The likes of jack have fought so many battles and won so many wars that if he ever thinks or feels the guns are aimed at him alone he will make sure he does not go down alone. If Jack is going down, he’ll bring the whole house down with him – even if that means the whole house of parliament in Port of Spain.

Jack has made it clear he will not fall alone from the bean stalk. He might have been joking a few years ago when he said he had “a tsunami of information” to bring down those who were threatening to bring him down. Back then he backed-down only after those hounding him backed away. He later claimed he’d destroyed all the evidence ‘by mistake’ and he and his accusers stepped back from the brink.

The world press, disappointed he hadn’t handed over the FIFA scalps they wanted, accused Jack Warner of engaging in ‘hyperbole’ (meaning he was all talk and no action, talking loudly but never delivering). This time around, however, Jack says he has “an avalanche of information” — including that he earlier claimed to have been destroyed.

Now that Jack Warner has his back to the wall, all arrows are pointing his way. The world press has lived-up in front of him like a global football firing squad, ready to administer the death penalty by any means it will take, whether by guillotining him with evidence from former co-conspirators, hanging him with retroactive revelations of evidence held back for the right time or pumping into him all the bullets his foes can muster in their global armory.

Yes, if you know anything about Caribbean politics in an election year, then you can count on this FIFA money issue becoming a major issue in the upcoming general election campaign in both Trinidad & Tobago.

And yes, if you think this FIFA money issue will only stay in Trinidad (and Tobago), bet your bottom dollar that ways and means will be found to make it an issue in Saint Lucia as well, but long before elections.

Yes, Jack Warner and SeppBlatter spent a lot to take football to all parts of the world, including the Caribbean, including Saint Lucia.

So, whether Saint Lucia’s name is mentioned or not, whether (past and present) local FIFA affiliates are cleared or not, this 2015 FIFA World Cup battle is more than about a game loved by billions. It’s about how far, how deep and how wide the game can go into the lives of people in so many countries today, now that it’s graduated from a sport to a global business.

The 2008 global financial crisis sparked off in the USA resulted in an international meltdown that affected everyone in every part of the financial world. Likewise, the 2015 FIFA storm won’t score winning goals for the global branded football empire, but will be felt in every part of the world where FIFA money has been spent.

Indeed, the current FIFA meltdown has reduced the football world to a mere village with only one level playing field: the court of world opinion. The global village now awaits the outcome of this latest football battle between the major players of world politics and the major players in the global business of world football.

It’s all about goals and penalties, but of a totally different kind in each and every respect!