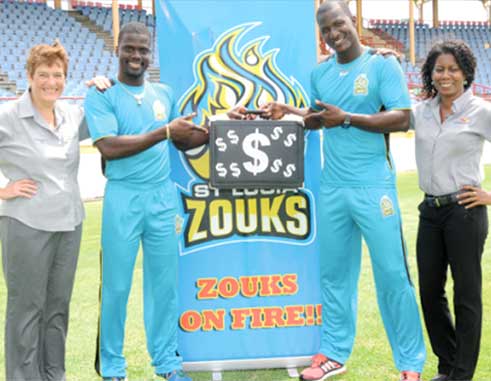 CPL fans have been given one million reasons to get their tickets for this year’s competition, with the launch of “Catch A Million”, in association with CPL sponsors, Guardian Group.

“Catch A Million” will be the biggest ever sports promotion in the Caribbean. If a fan is the first to catch a six one-handed at a CPL game they will automatically win US$1,000 and a chance to win a trip to Trinidad for the finals.

The public will vote on the best catches online at CPL’s official Facebook page to decide who makes the trip to Trinidad. If selected and you repeat the feat at the final, you could win the incredible sum of US$1 million! Full terms and conditions can be found at CPLT20.com.

There were 387 sixes smashed during 30 matches in the 2014 Caribbean Premier League, with Chris Gayle and Lendl Simmons topping the charts, after blasting 24 maximums each. With the likes of ShahidAfridi and Kevin Pietersen joining the ranks this year, fans can expect plenty more opportunities to win their prize at CPL 2015!

Damien O’Donohoe, Chief Executive, Hero CPL, said: “Tickets are already selling out fast as excitement ramps up ahead of CPL 2015, and there definitely won’t be many left when fans find out about the chance to win US$1 million! Catch A Million is absolutely massive for the Caribbean, and we’re so thankful to Guardian Group for making this once in a lifetime prize possible”.

Larry Olton, Group Vice President – Integrated Marketing Communications, Guardian Group, said: “We’re thrilled to be supporting the CPL to introduce Catch A Million, and we wish all the fans the best of luck during the tournament. The League is all about fun and excitement, and Catch A Million is going to take that excitement to whole new level”.