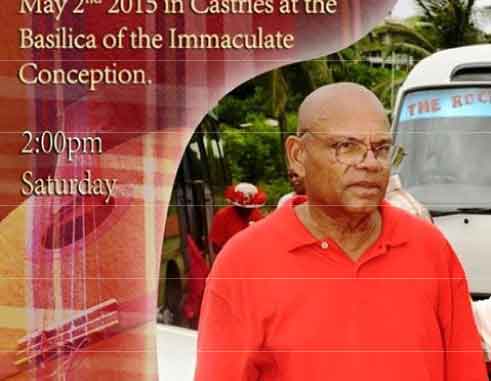 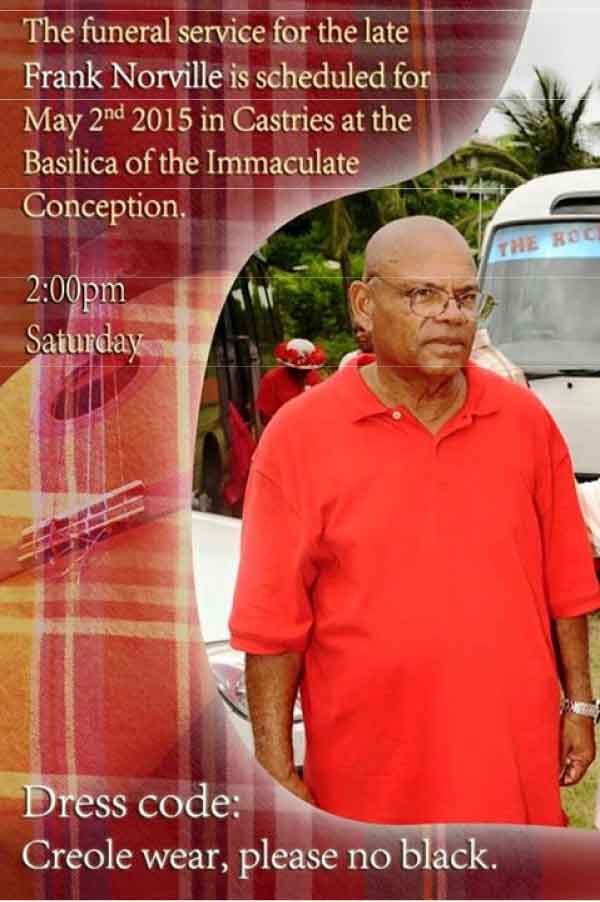 CYPRIANI FRANK NORVILLE was born on 10 April 1944, the third child and only son of Regina Norville and Rupert Benjamin Hurbert. His mother died when he was young and Frank along with his older sister moved to Saint Lucia. In Barbados he had started his formal education at the St Michael Roman Catholic School. Upon relocating to Saint Lucia, the family lived in Soufriere next to the St. Isidore Hall, where he attended the St. Dominic Savio’s Roman Catholic School. Under the guidance of an older friend his interest in folk music began to develop.

At the age of 20 he launched the “Scouting for Talent” programme for the Castries Catholic Youth Organisation (CYO). In 1966 he joined the Saint Lucia Arts Guild, a collection of young Saint Lucians who met to discuss, argue and explore every aspect of the arts. Nothing was exempt Music, Poetry, Art, Photography, Painting and Theatre- they were all up for scrutiny.

Frank joined the Government Information Service in 1973 where he was the Assistant to the Audio-Visual Aids Technician at the Public Relations and Social Welfare Division. At the GIS, his skills in still photography were used to photograph every community project, which later was mounted on display boards in the respective communities. His roaming across the island exposed him to the Flower Festivals of La Rose and La Marguerite and his love of the folk culture deepened. Frank transferred out of the GIS in 1986 to work with the Ministry of Community Development and later the Cultural Department; there he functioned as the Folk Cultural Officer.

In 1972, Frank (guitarist, singer) along with close friends, Augustin “Charlie” Julien (guitarist), Hilary La Force (guitarist) and Antonius “Secra” Gibson (drummer) formed the folk group, “Frank Norville and the Lucians”. They were later joined by Eugene Sealy (flautist) and performed in 1973 at the ground–breaking ceremony for the formation of the Department of Culture, which would later become the Cultural Development Foundation.

The group was a regular feature at many of the popular hotels at the time including the then Caribees, Halcyon La Toc and Saint Lucian. Their repertoire was predominantly original music all composed by Frank Norville. In 1975, the group of musicians and dancers visited Guadeloupe as part of a cultural exchange programme.

No age group was exempt from the ministrations of Frank in 1993 it was the turn of the preschools as he hosted the radio program called “Clap Your Hands”. As part of the Independence Celebrations of 1994 Cypriani Frank Norville was awarded the Saint Lucia Medal of Merit (Silver) for his dedicated services to the folk culture of the island.

In 1999 Frank retired from the Government Service. The retirement was the opportunity to fully dedicate his time to the arts. He was a virtuoso of the 12-stringed guitar, lead guitar, saxophone, banjo and cuatro, and was a long-serving member of the Folk Research Centre. He taught folk music at the Saint Lucia School of Music, where in August of 2014, with Bolivarian Republic of the Venezuelan Embassy he was one of the lead instructors for the Cuatro Workshop.

Frank not only performed the music and the dances, but he also documented the art form and was the author of
 Songs of St. Lucia (1983)
 Folk Dances of St. Lucia: Traditional and Ethnic (1989)
 Sweet St Lucia (2001)

Frank Norville died on the morning of 8th April, 2015 at the Victoria Hospital two days before his seventy-first birthday. He was the father of four (three sons and a daughter).

On the 28th April, 2015, the Cultural Development Foundation and the Folk Research Centre (FRC) collaborated to pay tribute to Frank in an event dubbed “Celebrating the life and work of Cypriani Frank Norville”. The event took place at the National Cultural Centre.