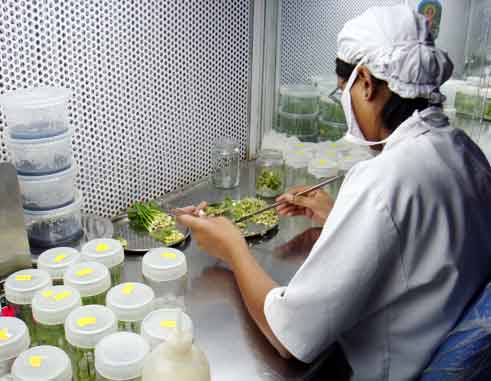 The Government of the Republic of China (ROC) Taiwan has been true to the Chinese saying: ‘give a man a fish you feed him for a day; teach him to fish you feed him for a life time’. Evidence of the ‘teaching-to-fish’ relationship between Taiwan and Saint Lucia lies in cooperation in agriculture, specifically plant tissue culture production, and inland fish farming. Prevention and control of Black Sigatoka disease in bananas is also on-going. The focus of this article is the tissue culture lab and fish batteries’ built at Union Agriculture Station with Taiwanese funds and expertise.

It emphasizes the work and contribution of the people and Government of Taiwan to the people and Government of Saint Lucia. Of course it may be argued that more can be done by Taiwan in the area of technology transfer and larger infrastructure development such as construction of highways, dams and airports. The discipline and continuous application of hard work (and savings) is also a crucial lesson which Taiwan can teach. We ought to engage the ROC in at least one major national development project if the relationship is to set Saint Lucia on a more sustainable path to development.

The tissue culture lab at Union Agriculture Station was built by ROC (Taiwan) at a cost of US$1million in July 2007. It was part fulfillment of a memorandum of understanding (MOU) signed between then Prime Minister Compton, and the Government of (ROC)Taiwan. It will be recalled that it was Compton who established diplomatic relationship with The Republic of China (ROC), Taiwan, after Saint Lucia achieved independence in February, 1979.

By 2003, with the decline of the once thriving banana industry the Government of Saint Lucia was importing large quantities of banana tissue plantlets from Israel – yes Israel, of all places. By 2006 the island was importing around US$150,000.00, worth of banana tissue culture from Israel. On arrival these plantlets were hardened in specially constructed green house nurseries and afterwards sold to local banana farmers at US$1.5 to US$2 per plant. No one can tell for certain whether any profits were realized and if so, how such profits were re-invested in agriculture.

The application of tissue culture technology aims at producing disease-free planting material which is the genetic replica of a desired plant variety. To this end the tissue culture lab at Union, Saint Lucia, not only produces desirable quantities of banana plantlets but does so at a much reduced cost to local banana farmers. Thanks Taiwan! In addition to lower cost to farmers, disease-free planting materials are more productive than disease affected ones. Each locally produced banana plantlet is sold for EC$1 to $2. At point of sale these plantlets are 6-8 (six to eight) inches tall.

Another interesting aspect of the tissue culture lab is that it also produces large quantities of anthuriums, plantains, orchids and ground provisions. After Hurricane Tomas (2010), had almost completely destroyed the banana industry of Saint Lucia there was a shift to more rapid development of tissue culture from bananas to ornamentals (orchids and anthuriums) and plantains. By 2013 the production and sale of plantains was on the rise and production and sale of tissue culture of plantain had to be increased to keep pace with rising demand.

Implementation of the tissue culture project, cost the government of ROC (Taiwan) about half a million US dollars annually – not including salaries for Taiwan Technical Staff based in Saint Lucia.

Of equal interest to the people of Saint Lucia is the fact that the tissue culture lab was handed over to the Government of Saint Lucia in 2013. The maintenance and upkeep of the facility posed a huge challenge to the Government of Saint Lucia as funds could not be found to drive the work of the facility. Orchid green houses need intensive care and regular funding in order to produce for new plantlets. It was hoped that the facility would operate on a revolving basis with funds from the sale of orchids being ploughed back into further production and purchase of suitable plant material.

The lab is still operating normally – only just. Clearly investments in agriculture are not a priority of this clueless Labour Government, even though it holds the key to rural job creation and self sufficiency in food/ vegetables. Sadly, this clueless Labour Government pays more attention to Tourism for which they had previously criticized the UWP administration. This apparent neglect of agriculture is more than a lack of vision. It is criminal!

Perhaps it’s time for the Government of Saint Lucia to stop paying lip service to the private sector, and instead invite bids from private enterprise to work with the technical staff from ROC, Taiwan in joint enterprises aimed at hastening agriculture development. Time is clearly not on the side of those who refuse to see and to learn. A smart government would have pursued partnering its private sector with suitable and reputable businesses in Taiwan for local production of more goods and services including, of course, agriculture and local construction of yachts for the leisure industry. Larger fishing craft for local fishers ought also to form part of a new deal with the Government of ROC, Taiwan.

Saint Lucia ought to be grateful to the Government and people of Taiwan for the help it has received with the development of its tissue culture and inland fishing industry. But Saint Lucia needs to press forward more aggressively and resolutely with new initiatives to use the lessons it had learned from the ROC Taiwan, to forge ahead more quickly than it is doing presently. Providing more and better job is not for tired and sickly people occupying valuable space in the administration of Saint Lucia and who pay only lip service to the private sector.