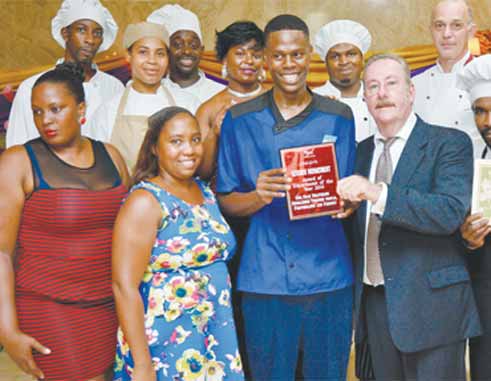 THE Royal and The St. Lucian by Rex resorts, last Friday April 24 hosted their Annual Staff Dinner and Awards Presentation.

Employees within various departments of the two hotels were recognized for outstanding performance throughout 2014. In his brief remarks, General Manager of The Royal, Richard Michelin, spoke of remodelling and renovations to the property but stressed that all of this pales in caparison to “the excellent service, warmth and friendliness of the Rex staff. Michelin told the gathering of expectant nominees: “I applaud you for all you have done in making our guests happy. Each and every one of you are winners in your own right.”

The Guest Speaker at the Awards Presentation was Director of Tourism, Louis Lewis. He underscored the role and importance of employees in the tourism industry “to be able to deliver on the expectations of guests.” Lewis told the employees that after the Tourist Board does its part to entice visitors to St. Lucia, the guest experience and the success of the destination depends largely on the quality of service from the workers within the industry.

The Director of Tourism assured the Rex employees that they are major contributors to not just the tourism industry, but to St. Lucia’s economy. He said a recent study shows that tourism contributes 67% of all the revenue collected by Government, totalling $520 million in 2013. Lewis says this shows how important tourism as an industry is, to a country of our size. He revealed that St. Lucia’s foreign currency receipts in 2014 amounted to $1 billion – tourism being the main driver of foreign exchange earnings.

In addition, Lewis said St. Lucia contributes one quarter of the foreign exchange reserves of the Eastern Caribbean Central Bank. In terms of job creation, Lewis disclosed that as of 2013, over 25,000 persons were directly employed in the tourism industry.

The Kitchen captured Department of the Year at The Royal, while Landscaping captured the title at The St. Lucian. Special awards were given to David Gerald of Food & Beverage and Chef EikeLauff. Marguerite Jn. Baptiste was awarded for 25 years of service. Patricia Hipployte, Marthalina Eugene and FabianCetoute for 15 years and Cendra Jn. Baptiste for 10 years of service.

ChristelAugustin, Thomas Vitalis, WindelAurelien, Mary Charles, Peter Derose, Bernard Wilson and Patricia Phillip were all awarded for 7 years of service. Awards were also given in several other categories including Most Committed, Most Dedicated, Most Improved, Guest Recognition, Special Recognition, Movers and Shakers.