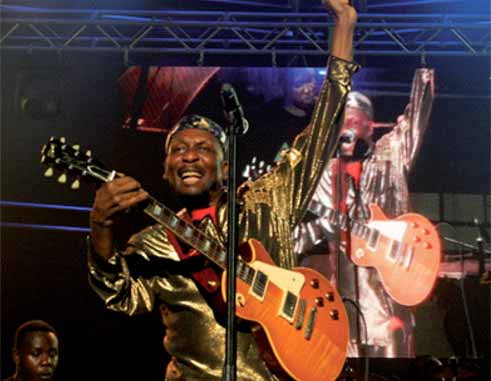 Cliff took the chanting fans on a nostalgic musical journey, performing hits like “The Harder They Come”, “You Can Get It If You Really Want”, “Hard Road To Travel”, “Many Rivers To Cross” and “I Can See Clearly Now”.

After his set ended, the fans wanted more from the reggae star whose extensive musical repertoire cannot be sung in a single show. Cliff gave in to the fans’ requests, returned onstage promising to do “one more song since it’s Mother’s Day”. He ended up doing about four more songs.

The final day of the festival began with Derede Williams displaying her infectious vocal styling and Jesse Billy on piano. Billy and the band then broke out with Herb Black’s “Calypso Jail” and Michael Jackson’s “Human Nature” before Williams rejoined the band to perform “Talk To My Heart”, “Tell Me Something Good” and set-ender “Win To Lose” by Fantasia.

Chrisette Michele’s soulfulness came through as she belted out “Blame It On Me”, “If I Have My Way”, “Total Praise” and “Golden”. She also had enough time to perform Ella Fitzgerald’s “Summertime” because, as she put it, the sunny Saint Lucian weather was good to her.

By the time Robin Thicke hit the stage, the crowd had thickened and gotten closer to the stage, too. Thicke came out with a burst of energy, getting straight into “Magic”, “Lost Without You”, Michael Jackson’s “Rock With You”, and Al Green’s “Let’s Stay Together”.

By the time he got to “Blurred Lines”, Thicke had ditched his jacket and shirt, jumped on the grand piano and had a party atmosphere onstage with a few women in Carnival costumes reminding patrons what comes right after the festival.

The weekend at Pigeon Island National Landmark began last Friday evening with a theatrical performance from Protégé, a talented group of local performers that comprises dancers, singers and actors. They set the tone for what is now being described by many as the best Main Stage Friday in many years.

Meshach (of Wevolusion fame) gave what he later told reporters was “the best performance of my life”. The Choiseul native, known for such hits as “Greedy Joe”, “Hail”, “Awake”, “New Dreams, New Vibes” and “Ethiopian Princess”, is still being described as one of the top acts of the season.

With hits like “Pump Me Up” and “French Kiss”, Krosfyah sustained the energy set earlier in the evening. The band did covers of ‘Woman By My Side”, Ricardo Drue’s “Vagabond”, Peter Ram’s, JW & Blaze’ “Palance” and Kassav’s “Zouk La Se SelMedikamanNou Ni”. As energetic as Krosfyah was, many fans thought they could have performed more of their own material.

Beres Hammond closed Friday evening’s show, proving that he still has that magical and magnetic pull to attract huge crowds to an event even though he has headlined at the festival before. With a sterling performance of fan favourites like “Putting Up Resistance”, “Rock Away”, “They Gonna Talk” and “No Disturb Sign”, Hammond seems to have booked his place in the festival for a few more years.

Saturday’s show jumped off with Pan Fusion featuring Allison Marquis. The band gave the crowd some groovy renditions on “Come With Me”, “Jitterbug Waltz”, “Caribbean Woman” (with Mervyn Wilkinson) and Augustin “Jab” Duplesis interjecting with his silky-smooth-sounding saxophone. The band’s performance of a folk medley and “Pan In A Minor” seemed a fitting way to close that sensational pan session.

Arturo Tappin’s saxophone did justice to contemporary hits like “Get Lucky”, “Stay With Me”, “Green Light”, “Bridge Over Troubled Waters” and “Through The Fire”. Things got amped up as he closed his set on a higher note with “Like A Boss”, “Turn Down For What”, “All I Do Is Win”, and “Happy”.

The band, Timbalive, didn’t quite get the response from the crowd that they would have expected. But the Cuban rhythms did go down well with a small crowd near the stage, many of them part of a local salsa dance group.

Jon Secada took some time going through his new and less-familiar music before finally getting the crowd into his zone. By the time he got to “Angel”, “If You Go”, ‘I’m Free” and “Just Another Day Without You”, there was a connection. Secada’s performance could have been better, though, had the sound technicians rectified the monitors earlier in his performance.

Flo Rida might not have seemed a big draw for the festival at first. But he did redeem himself to some extent by giving fans a high-energy performance. The Miami rapper had fans screaming as he performed hits like “Low”, “Right Round” and “Whistle”. Wearing a Saint Lucia flag-themed shirt and a squad of female backup dancers accompanying almost every move he made, Flo Rida would eventually hand out roses to some of the fans.

As high as some of the notes of this year’s festival were, there were some flat notes that organizers are going to have to eliminate as they prepare for the 25th anniversary next year. During the past 11-day season, the festival had been plagued by technical and logistical issues.

A press conference was held about three hours before the festival ended, chaired by Director of Tourism Louis Lewis and Deputy Director of Tourism, Tracey Warner-Arnold. Lewis said that while the Saint Lucia Tourist Board (SLTB) makes allowances for changes and have reconfigured, for instance, the layout of the Main Stage venue, “a lot of those featured have to be adjusted as we go forward.” These changes, he said, are necessary so that patrons get a better festival experience.

While the SLTB has promised to release the full statistics for this year’s festival later this week, Lewis said his cursory glance at the Main Stage crowds over the past weekend suggests that over 6,000 people attended the festival on Friday and about 4,000 people on Saturday. Lewis said it seems likely that Sunday’s huge crowd would have broken the previous record of 7,000 patrons for Main Stage Sunday.