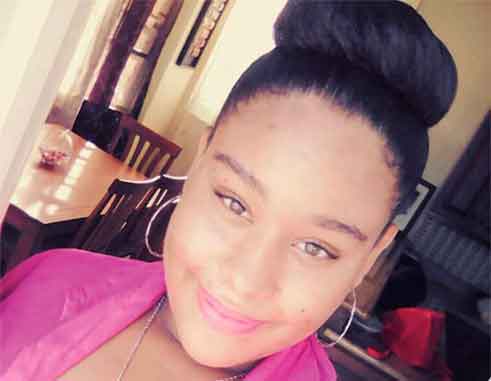 TWO weeks ago, I walked into the office and was greeted by a class of fourth form students from the Vieux Fort Comprehensive Secondary School who came all the way to our humble workplace to visit.

Whilst they were a lively and lovely bunch, one student stood out for me. Her name was Jade Surage. The 15 year old exuded strength and female independence. Whilst the rest of her classmates were in awe of my well known colleague Kendel Eugene better known as MC Scady Dot P, Surage was the outspoken one who was confident enough to go toe to toe with Eugene and directly answer all of his question.

The Desruisseaux teenager from Cedar Heights, Vieux Fort made herself even more interesting when she mentioned that she studies Auto Mechanics and is the only girl in her class to take on the “boys” subject…I immediately thought “GIRL POWER”.

Today, this FITC speaks about her decision to stand out from the rest and try to make it in a “man’s world”. Coming from a family where she has one younger and two older brothers, it is understandable where she gets the drive (no pun intended) from, but let me let her tell you all about it in her own words.

The VOICE: What makes you stand out from the rest of the girls at your school?

Jade: I did not see auto mechanics and mechanical engineering as subjects only for boys. They are not and were never intended to be. There is a lot to learn about vehicles. I even changed from wearing skirts to pants. My typical auto mechanics class which is a very fun subject is usually the first period in the morning but mechanical engineering usually comes after break. In the past there has never been a CXC exam for Auto Mechanics but students had to possess a set of skills and good knowledge of a vehicle to acquire a certificate which basically amounted to a CXC. This year CXC came out with something called a CVQ which is a list of skills each student must acquire to receive the certificate. It has a list of hours which signifies how long each task must be done for. There is also an exam for it.

The VOICE: How come you’re the only girl doing this?

Jade: I am the only girl doing it because most females, like the majority of the population of St. Lucia, believe that this is a subject only males should take up. I am out to prove a point and to excel at something that I love.

The VOICE: Why this subject though?

Jade: I chose this subject because I like working with my hands. As a young girl I never thought that I would ever be into cars and engines but as time elapsed I realised that I had a different passion…one which did not involve playing with dolls or dressing up.

The VOICE: How are you treated by you peers and teacher during that class?

Jade: In my Auto Mechanics and Mechanical Engineering classes, I am treated like a lady and respected as a lady but I still have to complete the same work with the boys and meet deadlines just like they. My teachers are not gender-biased and they told the boys that I have to do my own work. Sometimes I will need help but they should not make it a habit of always wanting to help me. I look at them like brothers.

The VOICE: How does it make you feel being in this position?

Jade: I feel like I have the power to change a lot of misconceptions about these subjects. I also feel some kind of pressure like I must do well in order to prove my point.

The VOICE: What point are you trying to prove by taking up classes in what is typically known as “male” subjects?

Jade: I am trying to prove that there are no subjects that are specific or restricted to a male or female. If it is something you love doing, go after it.

The VOICE: Do you see a future for yourself in this particular field?

Jade: Yes, I do. I want to become an aeronautical engineer (working on the engines of planes) and I am determined to accomplish this goal.

The VOICE: Would you encourage other females to take up such a subject or profession and if so, why?

Jade: Yes, I would encourage other females to do this subject because there are many opportunities just waiting for us. We have the brains to do anything we put our minds to. Imagine having a woman working on your vehicle, imagine how neat her work would be…no oil stains or scratches because she would treat it like her own with a delicate yet precise touch.

The VOICE: With this platform, what message would you send out to girls especially ones young like yourself to step outside the box and be different?

Jade: Girls rock! We are awesome! We play a vital role in the development of the country. To all those doing these subjects, Bravo!! To those contemplating, I say don’t hold back, follow your heart. If it’s what you really want to do, break the barriers that the previous generations built and let’s build bridges to encourage each other to continue studying “feminingly male-ish subjects”. There’s nothing wrong with being different. It just takes ONE brave person and a spoonful of faith to be the change you want to see in others.