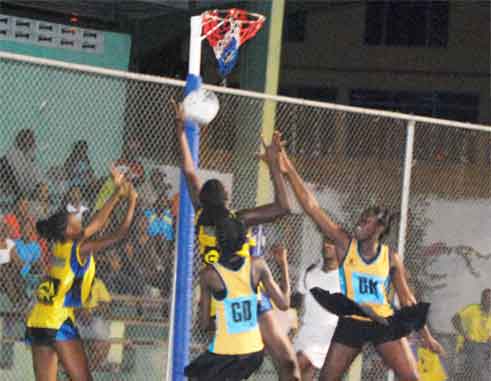 THE Vigie Multi Purpose Sports Complex will come alive today from 3.00 p.m. when the St. Lucia National Netball Association commences the Inter District Netball Championship with an opening ceremony that also includes a march past of the 12 participating teams and two exciting matches.

President of the SLNNA Liota Charlemagne – Mason spoke to The VOICE just before going to press. She said: “This is another effort in carrying the sport to all communities. You would notice that most of the districts have a team competiting in the tournament as the response was so positive. That augurs well for the development of the sport”.

She continued, “I am anticipating that the players would develop a sense of camaraderie as they will not be playing with their normal clubs. Also by playing in the different communities we will be creating an awareness of the game in the respective communities”.

Following the brief fanfare netball fans will see Canaries against Soufriere in a Group C encounter from 4.00 p.m., while Vieux Fort will take on Dennery from 5.30 p.m. in a Group B match up.

Meanwhile, as part of their preparations in defense of the ECCB / OECS Under – 23 championships in St. Kitts from July 18-24, the national team will serve off its competition phase in Group C and will play Anse la Raye tomorrow from 4.00 p.m in Anse la Raye.

The two other teams in Group C include Canaries and Soufriere.

According to the SLNNA, the girls will not be vying for the top prize at stake, but will compete in the championship for the much needed training and top level fitness. Their participation will also give netball fans across the country a chance to watch them in action ahead of the ECCB / OECS Championship.

Also tomorrow in Group A, Castries East will meet Gros Islet at Gros Islet and Micoud North play Vieux Fort at the Micoud Court, in Group B. Both matches serve off from 5:00 p.m.