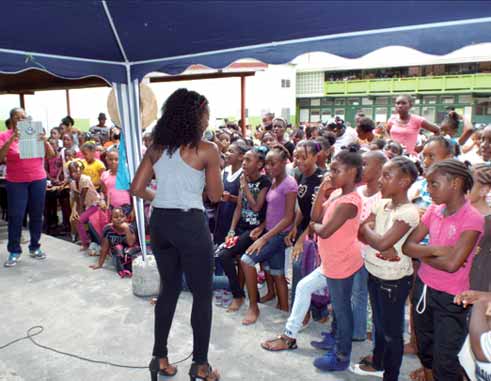 WHILE the majority of locals were reminiscing about the 25th Annual Jazz and Arts Festival which culminated on Sunday May 10 a number of schools across the island were not quite ready to end the festivities.

The VOICE paid a visit to the Ave Maria Girls School on Friday where students were being treated to music from some of the most popular local artistes at their third annual Ave Jazz festival.

The students of both the Infant and Primary schools experienced a variety of performances ranging from dance routines and steel pan to brass and string orchestra music.

Meanwhile on the mic, the likes of Derede Williams and Claudia serenaded the young girls while the groovy King did what he does best and rocked the crowd.

Chairperson of the Ave Clash/Jazz Committee, Adeltrude Jn. Charles said the results of the event were wonderful. The students, she said, were excited to see the performances as they were already aware of the line up.

Making reference to the students’ reception of the modern artistes as opposed to the old school ones, Jn. Charles said; “Although they gave a greater response to the younger ones, those who they were more familiar with, I think that they showed a level of appreciation for the old school”.

She added: “I think it’s very significant because in my opinion, old school music is so much richer than the new music and I think that the children need to be exposed to both so that they can decide for themselves what kind of music they will bring into the next generation”.

Singer Claudia Edward who spearheaded the programme “Edward For Education” which built a centre at the school, said her heart is at the girls school even though she never attended it.

Edward said: “The children need to know about especially musicians who have been there for a long time and have more experience because they bring a lot to the table and we, the new musicians coming up have to learn from them so it’s a gradual growth and a process. We learn from each other. Those who’ve been there before, they pave the way and then we walk along that path and the ones who come after us will do the same so it’s very important to have them as part of the whole festival.”

Veteran songstress Derede who not only attended the Ave Maria Girls School but also taught there said it was an absolute pleasure to be back in her capacity as a singer.

Williams said: “We are hoping that our music will inspire the girls as they may want to be singers themselves so us coming out here…performers, dancers, musicians, we hope that we can fill a void and that they are encouraged into doing something different.”

The famous Leslie “RasIzley” Nelson said it is always a pleasure to perform for the nation’s future as he enjoys sowing positive seeds.

Nelson said: “Things like that I’m really looking at…the future. The way things are going right now with the youth, it’s really good to have them, to enhance and teach them and sow some positive vibes among them. I love this, being among the children is my pleasure and an honour”.