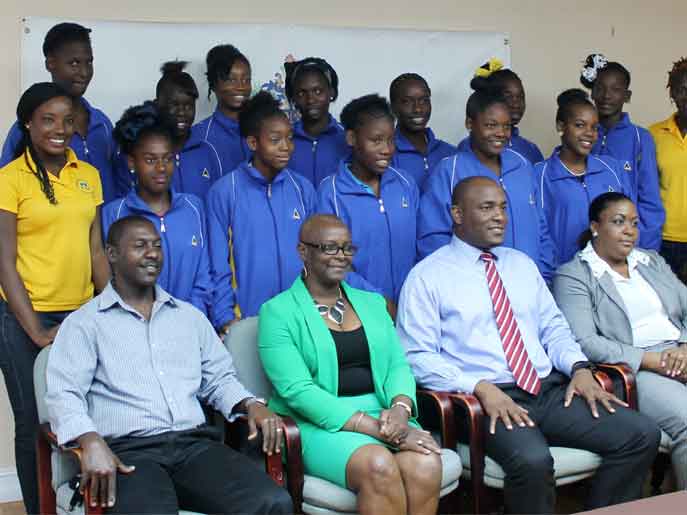 PRESIDENT of the St.Lucia Netball Association Liota Charlemagne – Mason is optimistic that her charges will make the country proud by winning the Caribbean Association Jean Pierre Under -16 Netball Championship here in St. Lucia starting on Saturday.

Charlemagne was addressing the 12 member St. Lucia contingent early Tuesday morning at the official presentation of the team to St. Lucia’s Minister for Youth Development and Sports, Shawn Edward.

She said, “The team started their preparation as early as January and because of the diverse locations in which they live, in order to get them prepared we had them coming from the two ends of the country. Having been selected we are confident that we have the best twelve players who presented themselves for training. We can confidently boost that we have strength in all three areas of the court meaning the defence, shooting and centre court”.

She continued, “I have seen them play and I feel confident they will represent us well and will give a good account of themselves I am sure by the end of the tournament they will be on top of the podium”

Team manager Claudia Noel – Jn Baptiste, noted that there was a lot of sacrifice and commitment made by the young girls to leave their respective homes to attend training every Saturday. You are special and you are the 12 best Under – 16 players in St. Lucia and you have to be proud of that moment”, she said.

Sports Minister Edward, said, he was impressed with what had heard so far about the national under -16 netball team “I stand here a very proud Minister for Youth Development and Sports. In recent days St. Lucia has done very well by our own yardstick, but I have always said there is always more to be achieved other than the successes at the regional level”.

The Minister added: “St. Lucia dominated OECS netball for a while, and whereas this has been a commendable feat for our country it is always a bigger challenge when you have to compete at the Caribbean level. We have won the Jean Pierre Under -16 tournament once before and this year, given what I have been told by the technical team we have no reason for us not to land that championship.”