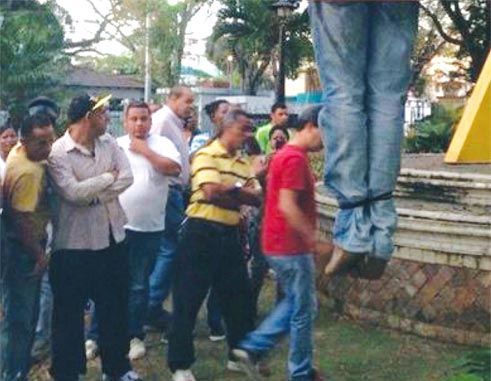 IN the Orange Banner this week, we are printing a two part article by Ambassador Reggie Dumas of Trinidad and Tobago, the former Special Representative of the UN Secretary General to Haiti. The article analyses the plight of Haitians in the Dominican Republic and the Bahamas resulting from recent discriminatory action by the Governments of those countries and in the case of the Dominican Republic by ordinary Dominicans as well. The articles were first published in the Trinidad and Tobago Express Newspaper last week. – Earl Huntley

ON BEING HAITIAN Pt. I
Last month, in the morning of the 11th, the corpse of a black man was found hanging from a tree in a park in Santiago, the second-largest city of the Dominican Republic (DR). The body had been beaten and the hands and feet bound by rope. It was subsequently identified as that of a Haitian who worked in the park as a shoe-shiner.

The scene was immediately reminiscent of the “nigger” lynchings of the old white American South. It quickly elevated to a new level of tension and mistrust the relationship between Haitians and Dominicans of Haitian origin on the one hand, and Dominicans of non-Haitian origin on the other. It is common knowledge, though many Dominicans will not admit it publicly, that this relationship has been bedevilled by the inflammatory and intertwined issues of race and history, and by an implacable denial of human rights to Haitians and to many, if not most, Haitian-Dominicans in the DR – they are black, therefore inferior, therefore undeserving of equal and equitable treatment.

Thus it was no surprise that in their first statements on the hanging some DR authorities dismissed race as a factor. Rather, they announced that the killing had resulted from a robbery – the victim, they said, had been set upon by other Haitians (or Haitian-Dominicans) who wanted the money he had earned earlier in the day. Two men, they said complacently, had been arrested and had confessed. Black men lynching black men! What’s the world coming to?

The confident first assertions were soon denied by other authorities. Just as well, because a week later another black man was found murdered, this time decapitated. I have so far seen no claim from Dominican officialdom that the perpetrators were black, and I probably won’t – I suspect such an explanation would be too far-fetched even for the spinmeisters of Santo Domingo.

The torment continues. A few days ago I received a video of a screaming black man, his arms placed around a pole and his wrists bound, being slapped and cuffed and whipped by a parade of passers-by. How civilised.

I haven’t been able to find any report on these events in the T&T press, obsessed as it has been with Carnival, Creed, Cooper, Kamla, Keith, kangkalang and kuchoor. Perhaps that is what we prefer: a laser-like focus on our navels to the exclusion of what is happening around us, even in the Caribbean. (Except, perhaps, for election shenanigans in St Kitts and Nevis. But that was kangkalang and kuchoor, too.)

The Haitian government has reacted sharply, though tardily (one wonders why), to what it recognises is a rapid escalation of anti-Haitian sentiment in the DR. It has called on the DR government to respect the fundamental rights of every Haitian in the DR, and has condemned the burning of the Haitian flag in that country. It has dismissed its Consul in Santiago, where the hanged body was found (his role in the aftermath was judged highly unsatisfactory). Passions among Haitians in Haiti are rising: large demonstrations have taken place; the DR flag has in turn been burned.

At least, however, some bodies in the international community have been vocal on the DR treatment of Haitians and Haitian-Dominicans on its soil. Last October, for instance, the Inter-American Court of Human Rights (IACHR) ruled against a September 2013 decision of the DR Constitutional Court that, according to Amnesty International, “stripped thousands of Dominicans of Haitian descent living in the (DR) of their nationality in a discriminatory way…leaving them unable to access basic rights such as work, health care and education.” The IACHR called on the DR to revoke the decision. No such thing has happened.

For its part, the Robert F. Kennedy Center for Justice and Human Rights has consistently inveighed against what it sees as deliberate discrimination by the DR state hierarchy – government and courts – against Haitians and Haitian-Dominicans.

Nonetheless, the agony continues, indeed intensifies. What of CARICOM, you may ask. It too has issued thunderous declarations on the subject, the latest on February 27 in The Bahamas. Once more it spoke of “maintain(ing) its posture of ‘no business as usual’ with the (DR).”

What are we to make of those fine words? I shall come to that next.