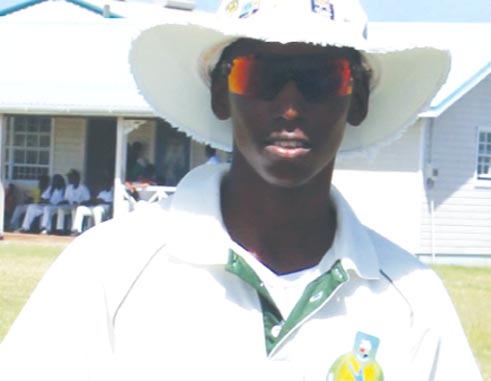 A double century from 2014 Junior Cricketer of the Year Johnnel Eugene, propelled Babonneau into the semi finals of the St.Lucia National Cricket Association Under – 19 inter district cricket competition, as Babonneau defeated Soufriere by 176 runs in Laborie, on Sunday.

Batting first Babonneau amassed 370 for the loss of 8 wickets with Johnnel Eugene top scoring with 211, and Jard Goodman 59. Bowling for Soufriere Tyson Desir picked 2 for 48

In reply Soufriere made 194; Julian Sylvester (43) and Yannick Jean (40) were the main stay at the wicket.

Bowling for Babonneau, Keegan Patrick bagged 4 for 18; Johnnel Eugene took 3 for 42 and Stuart Calderon 3 for 42 respectively.

In Laborie, an undefeated half century from Shervin George and a five wicket haul for Windwards Under – 19 player Dornan Edward were enough to secure victory for the home team.

Batting first Mon Repos scored 167; Christian Charlery 69 and JeannickSerieux (32) were the main contributors with the bat.

Bowling for Laborie, Edward picked up 5 for 52 and Shervin George 4 for 33.

Laborie replied with 168 for the loss of 9 wickets, Shervin George scoring 67 not out and Rick Moses 32.

Bowling for Mon Repos, Cory Serieux took 3 for 29 and KimaniSerieux 3 for 56.

At the Mindoo Phillip, a five wicket haul from St. Lucia’s under – 19 fast bowler Daniel Jn Baptiste proved too much for the Central Castries team as South Castries defeated arch rivals 4 wickets.

South Castries in reply scored 128 for the loss of 6 wickets with CollinusCalender hitting 38 and Kester Charlemagne 35. Bowling for Central Castries Joshua Mann picked up 3 for 44.

At the Gros Islet Playing Field, home team Gros Islet won by default as Choiseul did not turn up for their encounter on Saturday.