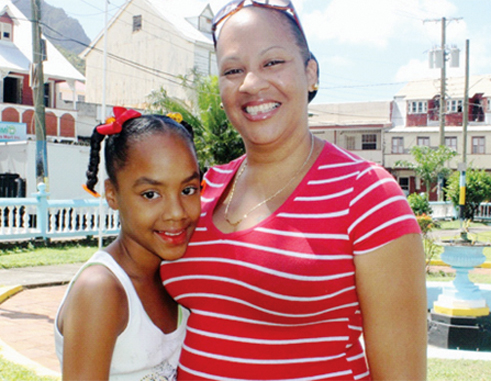 Wants A Piece Of St. Lucia

AS Saint Lucia observes its 36th anniversary of Independence this weekend, Soufriere’s native Helen Alexandra Jean is hoping that her gift of independence finally comes.

Jean, who turns 36 tomorrow, was the first baby born on the very day Saint Lucia gained Independence from Britain on February 22, 1979. Known to her fellow Soufrierians as “Indy”, Jean was born around midnight at the Soufriere Hospital to parents Magdalene and Eustacia Jean of Church Street, Soufriere. She was their tenth child.

“My godmother was the one who named me,” Jean told The VOICE on Thursday. “She gave me the name ‘Alexandra’ after Princess Alexandra who was here when I was born. ‘Helen’, obviously, is for the ‘Helen of the West’. My nickname is short for ‘Independence’.”

At birth, Jean was dubbed the “Independence Baby” and her parents received the $2000 offered by Chef Harry to the first baby born on that historic day. The restaurateur also sponsored baby Jean’s first year supply of milk formula. In short, she was the centre of attention.

“Back in the day, I was invited to cut the ribbon at ceremonies and meet royalties. On my 25th birthday, I delivered a speech at Sandals Grande where a member of the British royal family was present. I think that was the last time I was really invited to a ceremony like that,” Jean recalled.

Jean said her childhood years were cherished moments in which she virtually lived in a bubble. It was also a journey on which she slowly came to realize the significance of her own existence.

“Growing up, I didn’t know how significant or important I was until I was about age 5 when I met Queen Elizabeth II when she visited Saint Lucia. I also met Prince Charles and Princess Diana at the Pitons when I was 10. By then, I knew how really important I was by meeting those royalties. So it has been a journey,” Jean said.

However, when she was nearing 30, the candles on her cake and the magnetism she once had seemed to diminish as the nation was about to celebrate another independence milestone.

“There was supposed to be a flag-raising ceremony at midnight,” Jean recalled. “However, that was cancelled due to the bad weather. I was the one chosen to raise the flag that night.”

Jean described her life at school as “good”. She attended the Soufriere Primary School and later Soufriere Secondary School. Back then, she said, the government took care of school uniforms and school books expenses.

Like Saint Lucia, Jean now finds it difficult finding her way through independence. Currently unemployed, owning her own home is proving to be a challenge to the extent that she is seeking the intervention of the political will in reversing her predicament. Had Sir John Compton still been alive, she said, “I would be okay”. She said both the Stephenson King and Dr. Kenny Anthony administrations have ignored her.

“When the Stephenson King administration came in, I was up and down trying to get to see the Prime Minister,” Jean said. “Now that Dr. Kenny Anthony is there, it’s been very futile on my part getting to speak with them (and get them) to recognize me and help me. It’s very frustrating for me. I though that when they heard my name, they should know who I was. But that hasn’t been the case.”

She added: “Whenever they called upon me to do whatever they asked of me, I never turned them down. It’s too bad that the Labour administration didn’t really recognize me.”

With her birthday almost here, Jean is doubtful that what she is desperately seeking will materialize. Nevertheless, she is hopeful that the authorities will soon acquiesce to her request.

“All I ask of them is my own piece of Saint Lucia – a piece of land. This is all I ask of them. I tried to get it for my 35th birthday but it was very futile trying to make an appointment to see the Prime Minister. So to tell you the truth, that’s all I wish for my birthday. It could be anywhere in Saint Lucia – just my own piece of Saint Lucia. If it comes before my 37th birthday, that would be great but I’m definitely hoping that it happens before I turn the big 40,” Jean explained.

Jean’s mother has since passed but her father is still alive. She has two daughters – JeannealFontinelle, 16, who attends St. Joseph’s Convent and Sherlyn Jn. Marie, 11, who attends Les Etangs Combined. She still resides in Soufriere but the agony of unemployment is slowly getting to her, she said.

Jean noted that even as the island has come a long way since Independence, her sporadic travels to other countries remind her of how long the road ahead of Saint Lucia is. Nevertheless, she professed a deep love for the country whose attention was focused on her when Saint Lucia, too, celebrated a milestone.

“We still have a long way to go but I love my country. It’s still my country and it’s still Saint Lucia. I will always love Saint Lucia no matter what,” Jean said.

For now, Jean is issuing an open request to have a sit-down with Prime Minister Dr. Anthony. As she has done in the past, she wouldn’t mind volunteering her services towards empowering Saint Lucians to be proud of their country, she said.

“I would love that. I also don’t mind using my experience to further the good of my country. It’s my country,” Jean said.