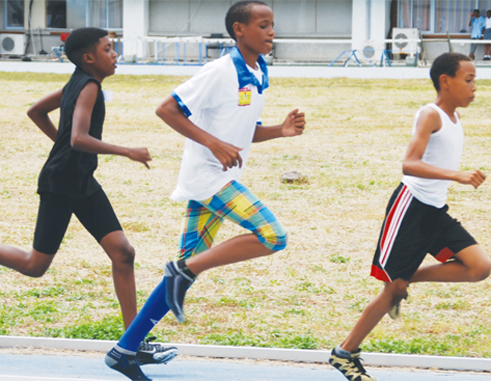 DESPITE a late start due to unforeseen circumstances on Tuesday, well over 400 students from The Vieux Fort Comprehensive Secondary School, Beanefield converged on the George Odlum Stadium for the school’s inaugural inter house sports.

School Principal Patrick Lashley told THE VOICE that he saw a number of shortcomings among the young athletes. Some were not fit while others were not able to run the distance properly. Breathing and baton passing techniques also needed to be worked on, he said. But apart from these two areas the students did pretty well.

“It’s our first time as a school so come 2016 one will see an improvement”, Lashley promised.

He noted that the school’s physical education teacher had been out most of the time as he was an active cricketer playing for the Windward Islands Volcanoes in the WICB Professional League. So the various teachers had to pick up the mantle to train the students.

Asked of his general impressions of the team’s overall performance and development heading into the inter-schools championships in March, Lashley said: “It looks good and for the last time we will be going along with Vieux Fort Comprehensive in La Ressource. We will be having a trial next week to select the best students to represent the south. Some of those students who performed well on the track came from the Pace Setters Athletic Club”.

Meanwhile, Vieux Fort Campus B will stage their annual track meet today at the George Odlum Stadium scheduled from 10.00 a.m. The four houses are Lewis, Walcott, Augier and Clarke.