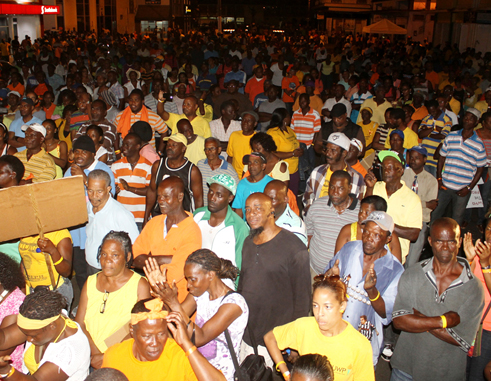 Hundreds of protesters turned up for the January 29 protest march staged by the opposition United Workers Party (UWP).

The protest march came as the UWP’s response to government’s January 12 adjusted prices for gasoline and diesel which the UWP says are still too high given low prices for crude oil on the international markets.

Despite Prime Minister Dr. Kenny Anthony expressing government’s intention to lower fuel prices further when the next adjustment period takes effect in April this year, the UWP claims that government needs to lower the prices now.

The protest march began on Thursday afternoon, ending in the William Peter Boulevard where a 4-hour-long public meeting was held. There supporters listened to a dozen party officials expressing their concerns about the fuel prices as well as other issues affecting the country.