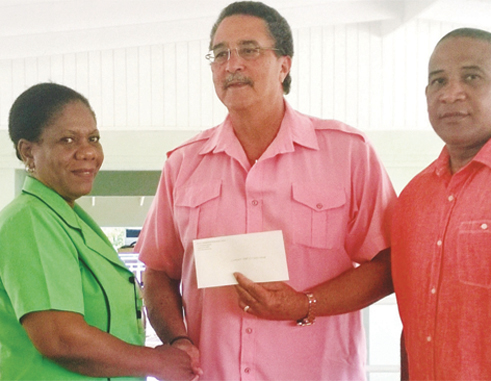 The purpose of the visit was to deliver to the home a donation of £10,000 ( a little over EC$40,000) raised by the Saint Lucia High Commission after its Gala Dinner and awards night last June. The black-tie affair was attended by Saint Lucian nationals resident in the United Kingdom, diplomats, British government officials, investors, tourism representatives and High Commission staff.

Ambassador Hilaire pointed out that due to the identity of the special guest at the gala dinner, an extraordinary amount of money was donated by those in attendance. Upon handing the cheque over to the Prime Minister, in the presence of Comfort Bay manager, Mrs. Gertrude Gustave, and members of staff at the Home, Dr.Hilaire spoke about the genesis of the donation, explaining that it was Dr. Anthony who had identified the home to receive proceeds from the event.

In receiving the cheque, Dr. Anthony thanked the Saint Lucian community in London for their generosity.He pointed out the importance of the work being done by institutions like Comfort Bay. The staff in particular came in for fulsome praise, Dr. Anthony saying to them that their work “is really a labour of love.” He reminded his audience that caring for the elderly, a priority for his government, is the shared responsibility of the state and the wider society. In that regard, he said, the recently implemented home care programme for the aged has been a real boon.

Mrs.Gustave said that the donation would go towards expanding the scope of services available at the Home.