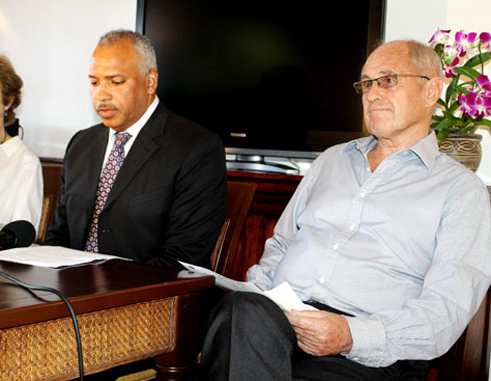 FRANKLY, we are appalled at statements attributed to Theo and Helen Gobat in the British press this week about the investigation into the death of their son, Oliver, that has failed to produce any positive results after nine months.

In a quite lengthy article appearing in the DAILY MAIL’s online edition on Monday, the Gobats vented their frustration with the failure of our police force in cracking the case. This is understandable and we wish, for justice’s sake, that the killer or killers of their son who they obviously loved greatly, was in the hands of the authorities. We feel the same way about the families of every other St Lucian who is murdered in our country and whose killer is able to elude he law.

But we have a serious problem, with wild, baseless claims that the Gobats have made about our police force without offering a single shred of proof in support of their case. Police Commissioner Francois has issued a prompt challenge to the family to substantiate their various “probabilities” that corrupt police officers were hindering their quest for justice, were involved in deliberately tampering evidence or covering up for the culprits.

“Of course we do not have the proof, it is just our opinion but we feel that very strongly that this is the case’, Helen Gobat is quoted as saying. She also found crutches in a statement by Prime Minister Anthony that corruption was a problem in the police force, and in the investigation ordered by our government into claims of human rights violations by members of the police force which followed concerns raised by the United States, to bolster her case.

The MAIL also quotes “a close friend” of the murdered Gobat, who it said had asked to remain anonymous, as telling the paper that “they” were convinced police corruption played a part. Again, no evidence to back up the claim, but they make it anyway. Really, this is most disgusting. The fact that we have problems with our police force, including alleged corruption—as do many police forces everywhere– does not mean that our policemen were involved in Oliver Gobat’s death. In the name of fairness we need more than people’s “feelings” to make damning allegations like this.

In fact, in the same Mail interview, the Gobats, appeared to be clutching at straws when they claimed that their son’s murder was a contract killing, probably carried by “someone from England or a local person”. They also link the killing to drug barons on the island and a deal their son was working on for the Landings resort with which he was associated. In fact, the “hit man” theory has gained a lot of currency among people here who discuss the case. But again, there has been no proof of this either.

The thing is if there is any evidence around who killed Ollie Gobat it has not yet come to light. The fact that a half a million dollar reward that the couple has put up for information on their son’s death–doubled after a previous offer—has failed to produce a single lead may be the clearest indication that the killer/killers were experts in their line of work and in covering their tracks.

Still, we share the Gobat’s grief and wish to see their son’s killer/s brought to justice.