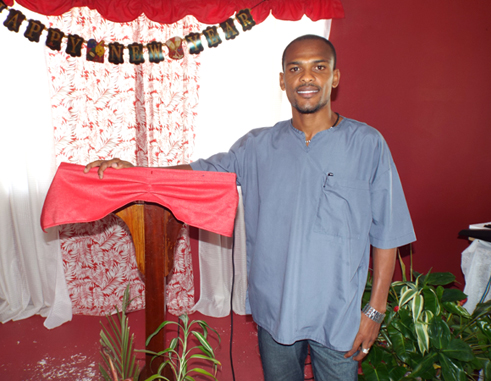 A Barbadian Apostle who has embarked on empowering St. Lucians with knowledge and creative thinking through spiritualty has vowed that he is nothing like the previous “Prophets” who have been widely accused of cleaning out the pockets of gullible locals.

Apostle Seon Moore has been a Christian for over 21 years and a religious minister for 16 years.

Moore says that he was given a mandate to St. Lucia to enlighten the nation and give its people some much needed knowledge. St. Lucia, he said, is a developing country and where there is development, there is opportunity.

When The VOICE sat with the holy man, he was asked what he thought of the people who use religion and the opportunities to more or less steal from innocent and unwitting followers of God.

Moore responded by saying: “I would not blame the prophets whether they be false or true because nobody wrings your hand and says give me your money.”

He added: “When I say I don’t blame them, it’s because you have your local pastors, do you help and support them? No! When you don’t do that you become a thief and so as a result of that, the enemy will send people and the same money that you don’t want to give to your local church, it’s going to go to them.”

Moore said that all of this takes place because there is a serious lack of knowledge amongst the people and this will prove to continuously be their downfall.

The Apostle said in no way is he condoning the actions of these people who steal from God’s children. However, people look at the whole concept of faith and spirituality blindly and wrongly.

“People are gullible and are always looking for a quick fix. They think God is a lotto machine where you put in a little and get out a lot but it’s the hearts of the people that matters and those leaders who are doing that will be held responsible.”

On the other hand, tithing, he said is extremely important. However, one must be wise enough to know who one is giving one’s money to.

Moore said: “What you have to understand is that there is a biblical instruction to give. There are legitimate reasons in the Bible for giving but some of the people that are collecting it is a problem where they are just taking the money. In the book of Acts, they eliminated poverty because the people brought their money and wealth to the Apostles’ feet and the Apostles distributed it.”

He then went on to say: “If you have to pay upfront to someone to get a blessing or a prophecy, it is definitely not of God and I am saying this as an Apostle…tell them I, Apostle Seon Moore said so!”

Moore said on the other hand you cannot “muzzle the ox that treads the corn” if you are receiving blessings. If you preach the gospel, he said, you too must live it and so you must support the works of the Lord financially.

When asked what sets him aside from the other “false Prophets”, Moore said: “I’m biblically practical. What I teach you within three months, you have to see results. Whatever I say, I put my life on the line for it because I see my own life. I grew up poor and in the world that we’re living in, nobody will give you a clue to get rich. They will try to trick you but I’m giving you solid information that if you go anywhere, it’s the same thing you will actually hear. But I’m doing it in a biblical sense.”

Moore said he knows that there will be scepticism about his work but “with success comes criticism and enemies and it cannot be avoided”. He knows there will be opposition but it is a part of success.

A church on the corner of Brazil Street and Brogile Street called “Nation Builders for Christ” was set up by the Apostle and has gained a committed following of over 30 people, so far.

Moore said he will be in St. Lucia for three months and will be hosting a three day conference where he will be teaching about “Well Creation through Creative Thinking”. The conference will be held from January 22-24 at the cost of $45 and is an introductory to a follow up free eight week course on the same subjects.

The Apostle said he aims to teach people how they can begin to see prosperity and increase in their lives despite their present conditions. He said: “I’m here to add value to the nation as a whole.”