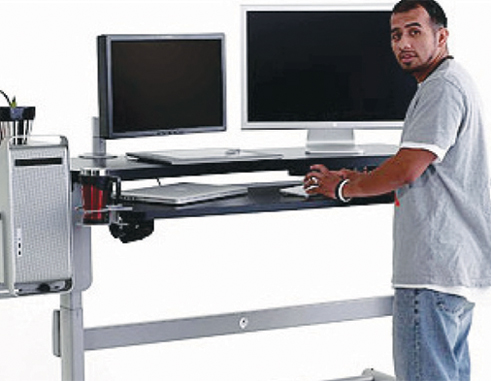 The Active Working Summit 2015, was recently held in London, England. During the 24 hour event, health care professionals, company CEOs and leading behavioural practitioners made presentations to business professionals, opinion leaders and decisions makers on the relationship between active workplaces and better employee health and productivity.

Already a popular office model in many Scandinavian countries, an active working office design is geared towards discouraging employees from being sedentary during the work day. Therefore, workplaces include sit-stand desks, the holding of standing or walking meetings and floor plans that facilitate the need for regular movement around the office, like walking.

Gavin Bradley, director and founder of Get Standing Britain and one of the organisers of the summit states, “There are certain tasks you’re much more productive doing standing. If you have to put some creative input, intense thought or numbers into the task, you’re often better sitting. But there are so many of our rudimentary tasks, like our phone calls and checking our inboxes, that are done significantly more, not just quickly, but efficiently, effectively and confidently standing.”

Across Europe many organisations are implementing active workplaces. Technology firm King Digital, professional services firm Redington and housing association Amicus Horizon all believe that there are benefits associated with the practice. Since Amicus Horizon introduced three sit-stand desks to their office in early 2014, they have reported a 10 per cent increase in the number of calls workers take and a 2 per cent increase in first-call resolutions.

John Barr, director of customer experience at the housing association commented, “Productivity has gone up, which is good, but well-being has also gone up, which is even better. Anecdotally, people will say they feel, in terms of time spent doing tasks, between a 5 and 20 per cent increase in productivity,”

When you consider these findings in relation to the fact that last year in Britain alone, it was reported that 131 million working days were lost because of absences due to illness, (4.4 days per worker), the argument for active workplaces seems to be a relevant one.

In her article ‘Employers Should Embrace Active Working,’ UK reporter Rebecca Gowler quotes the Institute of Sport Exercise and Health’s lead consultant in Sport and Exercise Medicine Mike Loosemore as saying, “Active working is ‘not an exercise regime but a change in behaviour. For it to be successful, active working must be accessible to all, constantly communicated and supported where implemented.’

The introduction of the practice to any business environment, lies very much with the senior professionals and decision makers responsible for the well-being and productivity of that organisation’s working population. Although the practice may seem a little different from that which they are used to, it could prove beneficial to the organisation in the long run. Therefore it should be considered that active workplaces could be a credible option to improving productivity, increasing engagement and reducing absenteeism on a significant scale.

(For more information contact the National Competitiveness and Productivity Council on Second (2nd) floor, Financial Centre Building, Bridge Street, Castries. We can also be contacted at 468 -5571/5576/5552 or visit the Council’s Facebook page at https://www.facebook.com/stluciancpc or email at stluciancpc@gmail.com)