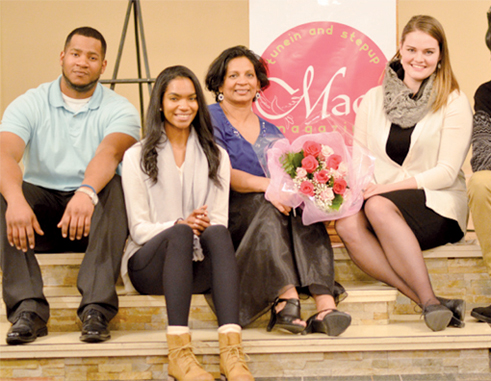 CANADIANS in Ottawa rallied with St. Lucian Magdalene Cooman as she launched her e-magazine at the St. Anthony Banquet Hall, Ottawa, last week on Thursday.

The theme of the launching was “Live Your Future Now” whereby attendees were asked to forget the hardships and glory of their past, ignore the uncertainties and anxieties of their future and immerse themselves in the present for the next three hours, which they did. The event highlighted the diverse cultures of St. Lucia, New York, Venezuela, Africa and back to Canada, in the form of a roller coaster itinerary.

The attendees were simply left in shock and awe as a result of the speakers who shared their experiences with Magdalene Cooman in Canada. These speakers included extraordinary men and women, in particular, who had touched Magdalene’s life and whose lives she had touched ever since migrating to Canada. They spoke of her sincerity, intelligence, kindness and her willingness to help others. Magdalene recognized five “Earth Angels” with bouquets of flowers, as a sign of her appreciation for their kindness to her since her arrival in Canada.

The event took on a new dimension as solo songstress, Nubia Cremeno, from Venezuela, gave a stunning rendition of her song in Spanish. Cremeno had the audience humming with her during her performance.

The event was described as “totally awesome” by one of the attendees. Dr. Joseph Edsel Edmund’s impact was felt at the launching as two of the speakers read his review of the magazine. In addition, his contribution to the literature world was highlighted through his books, including, “The Triangle of Success”, which is being used by Oprah Winfrey’s leadership school in Africa.

The highlight of the evening was the grand entrance of Magdalene Cooman to the main conference room. She was accompanied by Kim Yeldon and to the reciting of Desiderata and a cheering reception from the attendees. Magdalene used that opportunity to share her story with the audience and the different transformations she went through which led to the launch of the Mags Magazine. Her reflections led the audience to her experiences growing up as a child and her dreams to be a teacher and a writer. She highlighted many experiences where dreams were not fulfilled or opportunities were missed because of our tendencies to live in the past and move too much into the future without paying attention to ‘now’. She emphasized that her blogging journey over the last three years led her to being more present, capturing more of life’s precious moments and living her soul mission, after writing her Soul Mission Statement. Mags Magazine is a call to action for all of us to be more mindful of how we can create an amazing future by being more conscious of our choices moment by moment.