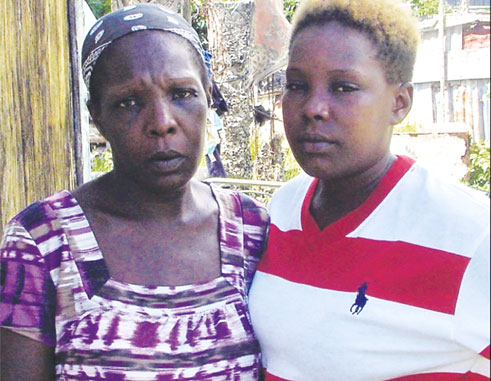 A Vieux Fort family is accusing police of using excessive force in trying to restrain one of their kin who was mentally disturbed, killing him in the process.

Dead is 27 year old Christopher Severin who family insist was shot several times in the presence of his mother and sister during an incident on Monday afternoon at the mother’s home in Bruceville.

The incident occurred after CollettaSeverin called for police assistance in order to restrain her son, Christopher, who was behaving in an aggressive manner, causing some concern in the neighbourhood.

However, there is another theory to the incident, which according to a police source, may have contributed to Severin’s demise. It is that Severin had to wait for hours before being treated at the St. Jude hospital, during which he bled profusely.

According to the mother, when the three police officers, including a female, arrived on the scene, her son had a cutlass in his hand.

Recounting the tragedy which occurred on her daughter’s birthday, CollettaSeverin said that at the time of the shooting her son was unarmed. She claimed that a total of three shots were fired at him, one grazed his shoulder with the other two hitting him somewhere in his waist.

“When he saw the police he held the cutlass a bit firmer and grabbed me around my waist telling me not to let go of him because the police would shoot him,” she recalled.

She said a struggle ensued between her son and the police, as they tried to restrain him. She pleaded with the police not to shoot her son and they responded that they were using rubber bullets.

Her daughter Kaya Severin added that the incident shattered her birthday spirit. “Today is my birthday…and the same day police kill my brother,” she grieved.

She admitted that her brother had had some bad influences in his younger days which had twice landed him in jail. But, she added, this was no reason for the police to treat him that way.

Kaya said her brother had behaved in an aggressive manner several times in the past, prompting the intervention of the police, but this is the worst he had ever behaved.

Inspector Leonce of the Vieux-Fort Police Station said rubber bullets were used initially in trying to restrain Severin, but because of the nature of the situation the police had to resort to pellets.

“The police knew who they were going to be confronting, so there was some degree of preparation. The officers are trained to deal with the situation,” he said.

In recent times a number of mentally-disturbed males have been shot and killed by police. Earlier this year, another Vieux Fortian, 51 year old Simon Gabriel, who was armed with two stones and allegedly threatened police, was killed by the lawmen.