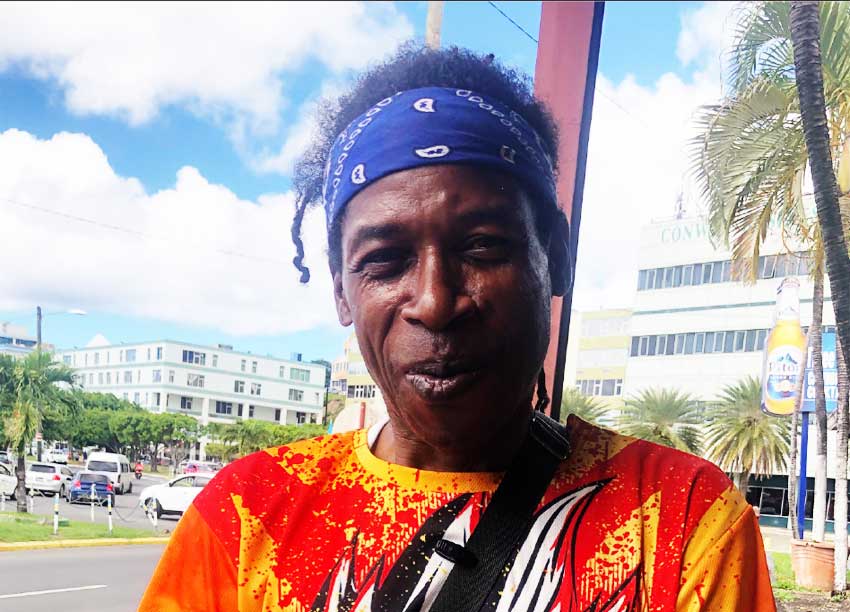 Meet Sylvester St. Ange, an extraordinary artist from Castries. He sells his art at the Castries market and he loves his craft with all of his heart.

I interviewed St. Ange against a sea backdrop on Wednesday. The sky was an incredible shade of blue, and so was the sea. It was absolutely breathtaking. The waves crashed gently on the rocks and I listened as the wind hummed its own tune. The waterfront was stunning and the city was lively. Although the sun was terribly hot, it couldn’t have been more beautiful. It was a perfect atmosphere for an artist like St. Ange and truthfully, I wouldn’t mind making it my office from time to time. But one can dream right?

“I don’t think there’s anything I cannot do,” he said to me shortly after we met.

“Once I see something or once something comes to my mind, that’s it,” he said confidently.

I believed him. He only had a few products on his table and told me that he was starting over, as most of his products were already gone. I wasn’t surprised, his work is meticulous and best of all he is self-taught.

“I’ve always had a love for art ever since I was a boy at Carmen Rene Memorial. It’s spiritual and I love that I get to be myself. I love to invent things and I love how calming it is. It also keeps me away from negativity. Instead of skylarking, or being around people who don’t uplift me, I can just do this,” the artist said gratefully.

He makes his craft at the market and according to him, it’s not always an easy process. Art, of course, can be tricky.

“Sometimes it takes months to finish something. Sometimes I spend hours thinking about how I’ll do it because it’s something that comes from the head, it’s not something you see. There are times when my work takes days and there are times I can do it in one day. It depends on what I’m working on,” he revealed.

“My paintings are all around the world. I’ve sent some to the U.S. and many other places. The only thing is, in Saint Lucia the tools for an artist are very expensive. Just the brush alone and the paint can cost so much sometimes and when you don’t have the support it’s the worst thing,” he added.

This doesn’t stop him however, as his love for art is all-consuming.

And he has quite the story to tell. He was once a troublemaker but now he knows better and stays away from trouble.

“After a while, it’s up to you to change. I got into so much trouble before, I can’t begin to count. I got in trouble thousands of times. I followed bad company and did things I wasn’t supposed to do. That was a long time ago,” he said.

Thankfully that chapter is over and the ending is brighter. Sylvester has been selling at the Castries market for the past four years and he’s happy that he gets to do what he loves every day.

“I plan on building a boat soon,” Sylvester added.

He’s a carpenter as well and that’s no surprise. After all, there’s “nothing” he can’t do.

You can find him next to JJ’s Bar on most days. Hopefully, you’ll find something you love.