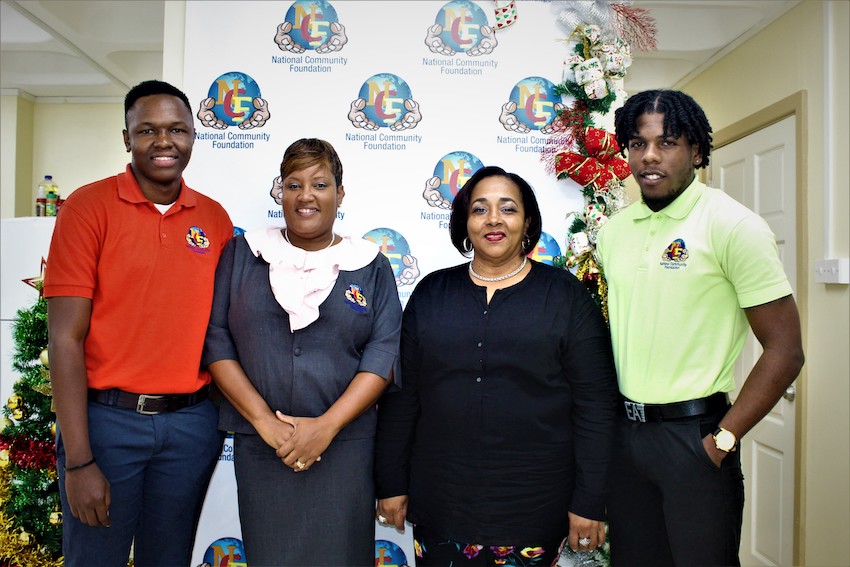 The past year was a very challenging one for the National Community Foundation (NCF), but the organization is nevertheless counting its blessings for having been a source of strength for many families affected by the COVID-19 pandemic. This year, the NCF is counting on the collective support of Saint Lucians to continue making life easier for the growing number of people the NCF supports.

Executive Director of the NCF, Michelle Phillips, says the past year serves as a foundation for the new one since it has forced the NCF to adapt to the harsh realities of the socio-economic fallout from the pandemic.

“Last year changed everything for us, including the way we do business,” Phillips said. “This year, we have to reinvent ways of doing business to ensure our work gets done.”

She added: “As a non-profit organization, we are always faced with the daunting task of raising our own funds to fund the various programmes that benefit many people across our nation. So we have to constantly adjust to remain successful.”

The NCF was established in August, 2002, and is a philanthropic, non-profit organization that grants funds to deserving citizens in the following areas: education scholarships, healthcare, youth at risk, older persons, persons with disabilities, the homeless, and the Chess in Schools Programme.

The NCF supports approximately 150 students on secondary school scholarships annually. The students attend schools throughout the island, 40 of whom sat the CSEC exams last year. In July, an additional 21 full scholarships and 6 bursaries were granted to students. The organization also assisted many other students with books, shoes and uniforms.

A Women’s Forum that taught the mothers of scholarship-holders soft skills to adjust their behaviours so that they can have a positive impact on their children was also hosted by the NCF.

“In 2020, we also assisted many people who needed medical procedures done, to the tune of $140,000,” Phillips noted. “Such procedures included cancer, neurological and spinal surgery, and interventions related to non-communicable diseases (NCDs), which are currently on the rise.”

Other notable success stories for the NCF last year included:

·      Making contributions to people who would have lost their homes to fire.

·      Assisting the Department of Human Services in renovating a home for a senior citizen.

·      Donating textbooks to inmates at the Bordelais Correctional Facility.

·      Undertaking a toy distribution drive in collaboration with the diaspora associations through the Saint Lucia Consulate in New York. (The NCF has since began requesting foodstuffs and tablets instead given the changing realities.)

With primary and secondary education now being done online, the NCF recognized that some students were disenfranchised by not having access the electronic equipment needed for home-schooling. Bank of Saint Lucia, a very supportive partner for 20-plus years, partnered with the NCF to donate laptops to students. The bank also donated food and personal items for hampers which were presented to the Cerebral Palsy Association.

In 2018, the NCF was assigned two U.S. Peace Corps volunteers, Adam Hart and Chris Barfield, who did a tremendous job with its chess in schools programme, resulting in a chess manual for teachers so they can teach their students. Through the assistance of Hart and Barfield, the St. Lucia Chess Federation was established and has since been certified by the international chess body.

Amongst the challenges faced by the NCF last year was not being able to host its Annual National Telethon that was slated for May but had to be shelved due to the national shutdown in March after the pandemic began. Because of its experience in hosting telethons, the NCF was approached by the Government of Saint Lucia to assist them in hosting a national telethon and this collaboration was a resounding success.

“That affected our own fundraising efforts, in that we were not able to execute the telethon the way we usually did,” Phillips stated. “Nevertheless, we’re thinking about tweaking our telethon, including re-energizing the collaboration we had with the various stakeholders last year.”

Despite experiencing a tough 2020, Phillips says her organization remains ready to serve those who cannot make ends meet. The NCF, she adds, remains thankful to the diaspora and local corporate and other sponsors who make the NCF’s work possible. She also expresses gratitude to NCF patron, Her Excellency Dame Pearlette Louisy; artistes, sponsors, volunteers, NCF staffers and their families. Without their collective efforts, much of the success recorded last year would have been impossible, she said.

“The requests to the NCF are growing exponentially and COVID-19 has definitely contributed to that growth,” Phillips said. “This year, we’re really going to need assistance from everyone as we continue to meet the demands of our people whose lives have been negatively impacted by COVID-19. We cannot turn a blind eye to people’s plight.”