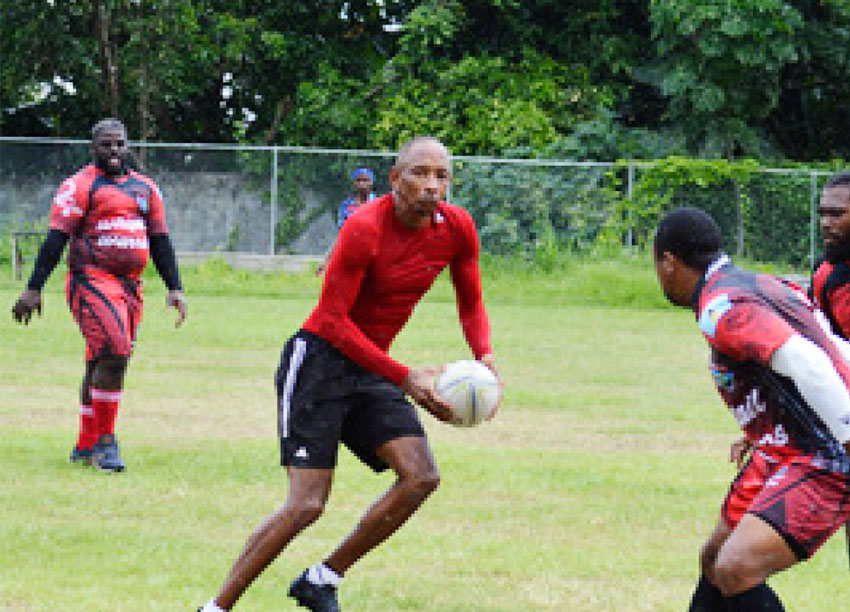 HE can best be described as a “Brilliant and Energetic” figure, a true champion of Rugby and since taking over as the Saint Lucia Rugby Football Union, Technical Director, he has orchestrated a complete revival of the sport on the island.

Wayne Pantor is a Trinidadian by birth, originally from the southern part of Trinidad in a community known as Gasparillo.

In an Interview with THE VOICE Pantor, who has a diverse background in sports and novelty events and is highly qualified in Rugby, spoke about his childhood and how it all happened for him to be the SLRFU’s Technical Director.

“I am functioning in the capacity as the Technical Director of Rugby for the Saint Lucia Rugby Football Union for approximately 18 months, where my first role was to assist the Women 7’s programme in their campaign to attempting qualification for the 2020 Olympics. Through Assistance from the Saint Lucia Olympic Committee and the Ministry of sports I was able to prepare the team to the best of their abilities with local and regional tournaments warm-ups within the time we had. Going into the Rugby Americas North Olympic Qualifier tournament the women were ranked eighth overall amongst the other 12 contenders, Pandor said.

He said the team performed admirably and placed third overall, however they failed to qualify for the Olympics by one point which to the team and management was unfortunate and disappointing.

The Saint Lucia Rugby (female) is ranked 3rd in this region. On the men’s side of things they played three games in the 15’s format of the game versus teams from Martinique and Saint Vincent and the Grenadines and were successful in all three games, qualifying them to play a qualifier to move into the regional championship Tier. The game still has to be determined by the regional management Rugby Americas North.

Said Pantor, “My other roles were to assist with the spread of the game on the island and capacity building at the coaching level. This was done through the school system by introducing the SLRFU Get into Rugby Programs where 22 schools (10 primary/12 secondary) participated between the period March 2019 – October 2020.

In terms of capacity building at the coaching level, six coaches were identified by the SLRFU through experience, volunteering and other coaching criteria to work with me as shadow coaches whom I would be basically monitoring for Level 2 World Rugby certification.”

“The SLRFU placed an advertisement on the international and regional Rugby Website for the post of Technical Director in 2018. At that time, I was functioning in the same capacity at the Trinidad and Tobago Rugby Union and about to retire from the Trinidad and Tobago Defence Force. So, after some internal deliberation I decided to apply,” Pantor said.

He said he watched Saint Lucia women at a regional tournament and saw their potential to further develop as a regional force and how much he would love the chance to make them a Caribbean powerhouse.

“This gave me the opportunity to make that a reality. I am motivated by challenges and my belief that my experience and qualifications, would match up to my international counterparts. I look back at how Saint Lucia has become the first Caribbean Rugby Island to hire a regional person in the Role of Technical Director, coach etc. As traditionally those posts were awarded to persons from the United Kingdom and United States,” he said.

VOICE: what was your first instinct when you saw the Saint Lucía players?

“Well as I indicated before, looking at Saint Lucia players, they have great potential as they have the attributes for developing into elite rugby players if they were involved in the proper development programmes. Their natural physical strength, speed and power etc. would be harnessed to increase their outputs at games and tournaments. They lack some tactical and game awareness, which most times affected the team’s performance as most points were scored from individual skill rather than team”.

Are you pleased as to where the sport is right now?

“Yes, But I continue to push the players and administration to develop a professional mind-set towards preparation as it’s not a seasonal thing, it’s a lifestyle. Professionalism must be the factoring fibre of your existence if we want to seriously compete at the higher tiers of rugby”.

“Saint Lucia is set at the crossroads of excelling with the involvement of the new systems and infusion of crossover athletes to the existing experience pool of players. With their performances, improvements and networking players are being monitored by universities and coaches in the USA for potential scholarship opportunities”.

VOICE: what are some of the challenges you are faced with currently?

“The challenges would be: Finances, as developing programmes need funds to offset overhead logistical costs for example, being able to provide transport and nutritional support for youth players and even sometimes senior players due to family financial situations and employment, etc”.

He said the newly appointed SLRFU Public Relations Officer, Saeed James is working to negotiate with potential sponsors to offset some of these costs. The players also participate in fundraisers which have been halted due to the COVID-19 pandemic.

“Breaking the local myths and taboos of the sport of rugby on the island, with the locals renaming it “ROUGHBIE” with my help, and introducing the sport into the community and having a presence on the social media platforms the sport has slowly integrated into the Sporting landscape,” Pantor said.

VOICE: What are your thoughts on the setbacks caused by COVID-19?

“The pandemic affected all pre-existing plans for rugby internationally and regionally. Saint Lucia was still fortunate, in comparison to other rugby countries in this region, to host some local tournaments before having to cancel the remaining fixtures due to the second wave or community spread of the virus as it is important to have players’ safety and welfare first,” Pantor said, adding that he is optimistic about the future development of the game once the players use this down time to do individual development in their basic Strength and Conditioning.

VOICE: On the personal side of things, how did it all start for you?

“For me, I would say my family tree heritage is rooted into the sporting landscape of Trinidad and Tobago. As both Grandfathers represented Trinidad and Tobago, particularly the southern district, in the 60’s in sporting discipline of Cycling and Football. My father also represented at a national level in the sport of Cycling in the late 60s, early 70’s, he rode at that time for Texaco and Trintoc Oil Refinery Club,” he said.

He said his sporting endeavours started in primary school where he participated in track and field at the 100 metres and 200 metres in regional and national games. He also participated in community football teams during his teenage years.

“My parents tried to encourage me into cycling but unfortunately my passion was not there,” he said.

“My rugby journey began at the age of 14-years in the secondary school system. The new sport was when this strange -shaped – ball caught my curiosity.

I excelled quickly amongst my peers as my background in track and football assisted my development and I was able to use my speed, football skill and evasive running style to score.

“After leaving school I joined a southern club known as Exiles Rugby Football Club which was a mix of expats employed at the Trintoc Oil Refinery and local southern players. I went on to make the Trinidad and Tobago National Under-19s and Senior 15’s and 7’s teams,” Pantor said.

According to Pantor he was approached by the Trinidad and Tobago Defence Force to join their ranks in 1996 where he went on to transcend through the ranks on and off the field from player to coach. During that period, he was given administrative leave to pursue opportunities abroad in terms of scholarship and player contract as he was scouted by touring teams who came to Trinidad.

“I Played both formats 15’s and 7‘s of the game in the United States, excelling more at 7’s. With my Alumni team Severn River Rugby based in Annapolis, Maryland reaching and winning MARFU finals,” he said.

“I decided to retire as a player at the international level and focus on enhancing my coaching skill as a way of giving back to the sport that opened many doors for me to develop as an individual,” Pantor said.

“As my journey continues with the SLRFU, I am committed to make the legacy of rugby in SLRFU live far beyond my time on the island. Throughout the Caribbean/ International rugby landscape,” Pantor said.

Pantor gave thanks and gratitude to the SLRFU, the SLOC and the SLMS for the opportunity to showcase his skills as Technical Director showing other countries that the Caribbean coaches can hold their own. Giving future coaches and administrators the vision and encouragement to put their hats in the arena. As the sport is bigger than any one individual.