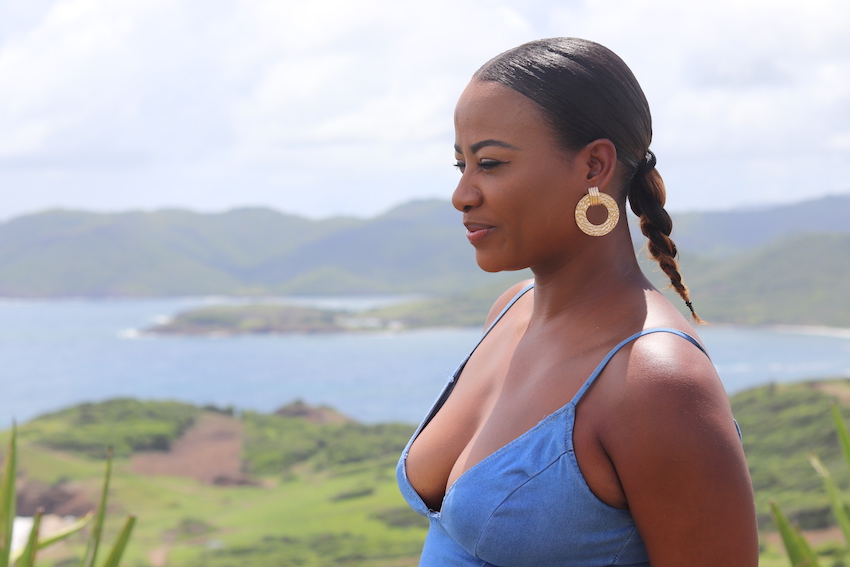 When you speak to Shurma, no, let’s be “entertainmently” correct here. When you speak with D.J. Colayshan, she immediately strikes you as the official source of the party. Her energy, charisma, and genuine love for wanting to see everyone enjoying life’s precious moments is captivating and after you are reeled in, it’s difficult to escape the net – nor will you want to.

“I was always the one singing a song, beating drums, writing a poem or something”, she said as she corrected the interviewer (me) when quizzed about being the quiet student at school and in class. “Maybe when I’m about my business but I was never the “quiet” student”.

Shurma St. Clair is a Castries Comprehensive Secondary School alum who has been turning heads on the island under the moniker D.J. Colayshan in an industry dominated by males. So scarce is her gender on this side of the industry that you can count on one hand the number of female deejays who are or have enjoyed the success that she is working assiduously to maintain.

Her journey into becoming D.J. Colayshan was anything but an overnight success. The party starter, who turns the afternoons on Real FM into her private party has been honing her craft since her teenage years while living on the Dutch side of the constituent country of the Kingdom of the Netherlands in the Caribbean, Sint Maarten.

“A friend of mine had a radio show every Tuesday and Thursday. He would invite me on but I had no idea people liked my voice” she revealed. “He asked if could join him and on the third day, he left me on my own”. That was her first taste of being an on-air personality with a full four-hour shift.

As intimidating as that may seem, Colayshan handled the shifts exceptionally and after only three weeks, she was made a permanent and sole fixture on both days. She would go on to feature a multitude of Deejays including her ex of sixteen years, who she credits with being instrumental in her career.

“A regular advertiser on the show came one day and gave me flyer informing me then that he had put me on his event”, a stunned Colayshan at the time was well versed as a host or mistress of ceremonies, but the promoter was adamant he wanted the Deejay he and everyone else had grown to love from the radio.

Not one to say no to anything, the novice D.J. got a crash course during the night’s set up and the rest all fell into place. “I don’t know if it is because the loved me or it was the first time seeing a woman do this the way I did, but the reception was amazing”. That was when the deejay was born and also when the bookings flooded. “From then on it would be Colayshan and Deej Sly on every event”.

Things were definitely on the up and with a persistent mentor in Deej Sly, the duo would enjoy years of success together. However, the go-getter attitude that still burns in her today saw her move back home to Saint Lucia. “I didn’t feel I was reaching the plateau and I wanted more,” she said. Her visits back home on vacation during the carnival season especially further fueled her desire to return home but she will admit that one of the most dangerous hurricanes to hit Sint Marteen, Hurricane Urma together with news of the imminent arrival of Hurricane Jose and Maria fast-tracked her decision.

Trading a well carved out and successful career in one of the most beautiful islands in the Caribbean would be intimidating and outright scary for the average Jane, but this wonder woman approached the change like a bonafide superhero. Her personality would ensure that she wouldn’t stay off the circuit for too long and a meeting with proprietor Ricky from Ricky’s in Marchand ended in Colayshan’s name being added to a line-up that featured the legendary sound from Jamaica, Stone Love.

Her dedication to her career and eagerness to be successful saw her freelancing at a few major stations in Saint Lucia including The Wave and Blazin FM, but it was the family at Real FM that secured her talents for the coveted afternoon shift, The Jump Off from 2-6p.m.

Radio has since evolved on the island and the norm of opening a mic port to announce the time, back announce artistes and read out the news has been afforded the luxury of live video broadcasting. No longer is an announcer hidden behind a microphone. Colayshan and her Real FM team have used this component to their advantage and usually themes her show to suit a certain season or concept. One afternoon it can be in the studio and the next she is at the beach dancing to some sweet steel pan music, ensuring that the island remains informed and entertained.

Shurma St. Clair, D.J. Colayshan, is a testament of how one can build a successful career if one is courageous. The fear of failure should never overpower you to the extent that you are prepared to kill off your dreams. She also credits the support system she has in her family, especially her sister Ola (who often takes up the role of stylist, agent and manager), Deej Sly(who insisted that she practised and even got her the first controller) entertainers in Saint Lucia such as Selector Twis, Hollywood HP (who from the onset has shown great faith in her) and of course her Real F.M. family.

The island’s entertainment industry undoubtedly has a spot for everyone, no matter their gender to become successful, once the individual is willing to put in the time and effort needed. However, the ever-persistent D.J. Colayshan who has a background in Accounting recently ventured into another business that took us by surprise. An alpha woman in many respects, she and her sister Ola are responsible for ensuring individuals who stopover at their aunt’s bistro, Lyd’s Bistro in Mongiroud enjoy a 5-star experience without the 5-star price – but that’s for another feature!