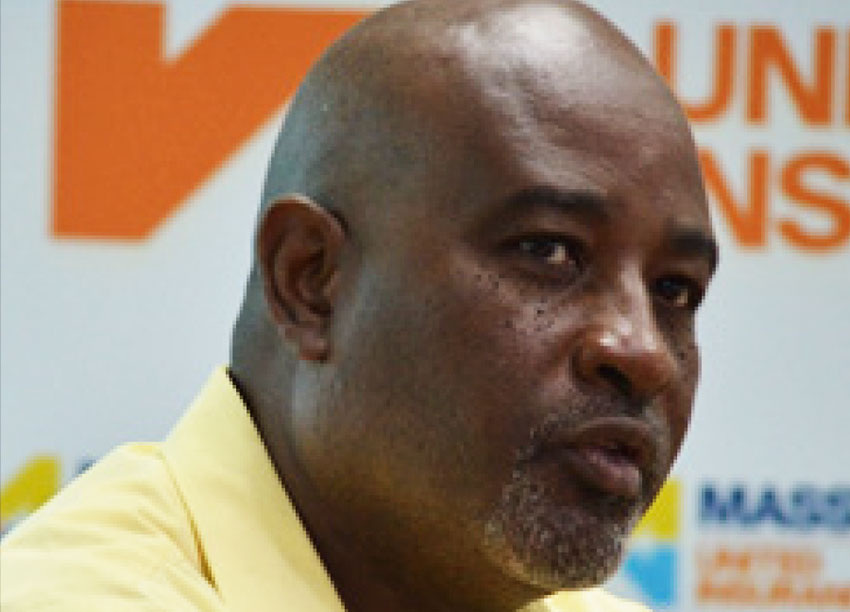 THERE is no denying that sports always had a connection way beyond politics in one way or the other and in the real world one does not have to be the most famous sport personality attracting attention from every corner and every field. In fact, a lot of sporting events cannot be conducted until the higher authority, for example government, makes it possible.

Sportsmen and Sportswomen of the past were considered as idols and role models. Their leadership skills, commitment and discipline qualities have proven to be a life learning lesson for most of us today.

This individual I am about to present to you is no stranger in sports development on the island.

He is 5’ 7’’ tall, and goes by the name, Patrick Peter Mathurin affectionately known as “Pato” by all. He is a 53 – year – old career public servant currently in the position of Director of Sports in the Ministry of Youth Development and Sports. A position he occupys for the past two years.

Where did it all start?

A born resident of the Castries district, living first at Leslie Land, then Grass Street and finally Ciceron.

A former student of the St. Aloysius R.C. Boys Infant and Primary schools, St. Mary’s College and the Sir Arthur Lewis Community College – Division of Teacher Education and Educational Administration. He did a stint at the University of the West Indies-Mona Campus, Jamaica.

According to Mathurin,” The involvement in sports may have started from the early days living in close proximity to the then Victoria Park, later renamed Mindoo Phillip Park (MPP). I was engaged in the playing of football, cricket, athletics and whatever other games that boys of that era engaged in. With my two older brothers, we trodded to the Park almost on a daily basis. Being part of an all-boys school was an additional incentive as I did not want to be the boy who played nothing”.

At St. Marys’ College, he participated in football and athletics. Unfortunately, although he held his own, the competition of the day did not allow him to make any of the school teams.

“My real journey in sports, I believe, really crystallized when I joined the Ciceron Seagulls United in 1981. I need to give credit to the tremendous exposure that I had through this Club. It gave me a glimpse into community service in a different way, paving the journey of my lifelong philosophy of teaching people to fish,” Mathurin said, referring to empowering people.

He added, “I served on the Executive of the Cable & Wireless Ciceron Seagulls United Sports and Cultural Club in various capacities from 1981 – 2000 (with a major break between the years 1988 to 1997); to date being the only member to have served in every position of the Executive”.

“My involvement in public life was not only limited to sports as I also served in the following capacities: Secretary of the Ciceron Development Committee (1993-1994);

According to Mathurin, “Having continuous engagement in sports, I was in constant contact with the Department of Sports and it was my love for the type of work being undertaken there, that I felt that I could make a contribution to the team. This journey started in 1998 as I transferred from the teaching profession having been there from 1987; a satisfying experience for 11 years.”

He said, “The transition was an easy one for I believe I prepared well and had the necessary experience. I served as the Youth and Sports Officer in every part of the island except Vieux Fort, Laborie and Choiseul for twenty years before making the ascendency to the Director of Sports. Can someone doubt the experience or competency for the position?”

“As the Director of Sports, it provides me with the opportunity to direct the future of sports in the country. A scary perspective but with knowledge and experience on my side I know I am up to the challenge; plus I know that I have a strong team which I can rely on. I am of the view that we need to be strategic in how we approach sports programming as this underpins sports development.

In terms of disappointment: Mathurin said, “I cannot really point out any major disappointment sufficing to say that setbacks are just opportunities to do it differently and maybe to do it right”

“This year has been a whirlwind to put it mildly. I think this is a good time to take a step back and rethink sports in general. This has already started as the Ministry for Youth Development and Sports has revamped its Elite Athlete Policy, reformed its Coaching Unit in the process of developing a Facilities Management Policy and also working on a Venue Naming Rights Policy,” Mathurin said.

On COVIDE-19 and School Sports he said, “School sports had taken a major blow, but again we should see opportunity in adversity. A new approach is now. Discussions have started and needs to continue so that it will not be business as usual as we get accustom to our new normal.”

Meanwhile, plans are in the early stages for a major Sports Symposium towards a new scientific approach, a paradigm shift if you will in how sports in Saint Lucia progressed.