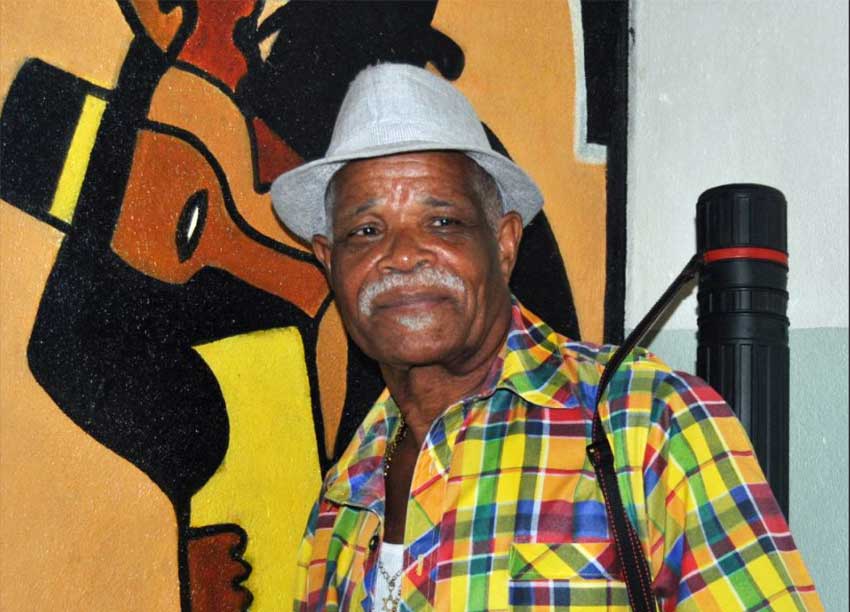 WITH the St. Lucia music fraternity getting set to commemorate its annual ‘St. Cecilia’s Day’- feast of musicians festivity, we profile one of the islands’ foremost contemporary and popular folk musician.

Augustin Julian aka “Charley” has been involved in the cultural art form for the better part of his life. And a gem of a folk musician and cultural activist is how he is recognized locally and in the wider region.

Charley also boasts of exploits on foreign grounds as well, where with his band – Mamay La Caye have put on some exciting and receptive performances for patrons.

He has been involved in the cultural art form from an early age, and is also an accomplished storyteller; but his love for the Quadrille and preservation of that art form is high up on his priority list.

Born in 1948, Charley who hails from the Morne du Don community, fondly remembers that when youngsters his age went for the bigger and larger toys, he chose a harmonica.

“I started practising that harmonica …from about one mile away until I got home,” he recalls. “At home, it was quite annoying to my mother but nonetheless, I persisted with playing the instrument.”

Charley admits he got ‘hooked’ to the art of folk music, and according to him : “This is what I was raised in , going out and listen to people play guitar , violins … and my mother (deceased) knew a lot about folk music. And that is where I learnt the art of playing folk music, as I began by going out to perform the Quadrille.”

His boyhood days took in community dances for youngsters, held separately than dances for adults. The kids’ session, he says, called the ‘Mawon” ran from 1.00p.m. to 4p.m.; while the “Balle Quadrille” was held at night for adults.

Initially, says Julian, he was intrigued with the artists of the time ‘guitar playing’ skills; but later down the line his love for the violin took on an added dimension to his musical skills.

Charley and his band – Mamay La Caye have been together for the past 40 years, and though band members have come and gone their creativity and dynamism in dishing out popular folk tunes has not diminished.

Quite interestingly, he notes that routine ‘practise sessions’ has not been a regular component of their schedule. The musicians, he adds, remain fine-tuned to their art utilizing their listening skills and cultural rhythmic interpretations to good effect.

“How we get to practice is while we’re playing,” said Charley. “In fact, the thing is that the guys I play with, they are all well familiar with the tunes that we play, for instance, a La Comete …so they know (it) and we play the same beat.”

Charley has played with several well-known local folk musicians in his time, and amongst these he lists; Rameau Poleon, Yves Duplessis, ‘Bethel’, and Richardson ‘Ti Kisson’ Placide – whom he regards at the ‘Grand Master’ of the violin.

He stresses that, “These four musicians are my mentors…because I follow their pattern. These are the guys that inspired me.”

He explains that though instrumental performances was the norm , at the time , nonetheless, there were the ‘Chantwelles’ singing tunes at the La Rose and La Marguerite festivals.

Dame Sessene Descartes, he adds, tops the list of ‘Chantwelles’ at the time “and it was the same folk band that used to play with her.” He explains that the back-up band for the festivals would consist of a banjo, drums, ‘chak-chak’ and Chantwelle , and sometimes a ‘Baha’ was added to the beat.

While still attending school, at age 15, Charley initially got into the flow of things playing the guitar, “and this is where I accompanied a lot of these icons…I use to carry my guitar and I used to join them, so that is where I learnt (to play ) their style of melody.”

After completing school Charley migrated to the Virgin Islands, but according to him, “That doesn’t mean the folk music was out of me …but I was out of touch because I was not around. But I know the music and I know the dance because I watch people dance the Quadrille.”

Upon returning from the Virgin Islands, Charley met with Frank Norville- originally of the ‘Hewanora Voices’. Subsequently, in 1970, he founded the ‘Frank Norville and the Lucians’ band.

“I was associated with Frank for 30 years but eventually we branched out …because I always wanted something broader, since what we had was only singing and the guitars and drums,” Charley recalls. During that time, he adds, the group performed at local ‘Queen Shows’ pageantry “and we played all over the country at that time ,but I had something at the back of my head…the Quadrille.”

He says eventually they added dancers to the group’s presentations, while traversing the rural communities to perform “and to see the old folks dance for us as we provided them with some incentives …and then we formed a group and we were the first group that put out a video – a dancing video to send it to the BBC in London.”

This latter development, he adds, led to the formation of other dance groups that emerged on the scene, such as the ‘Helen Folk Dancers’, ‘Les Danseurres Traditionale’ and others.

Though Charley and Frank branched out in the 90’s, he always made time to play at gigs for his old friend. “From there, I used to follow the bands and there was a guy named Moses Leonce who had the band – Mamay La Caye.”

He literally adored the man’s playing skills as he was one of the few violin players on island, at the time.

Charley purchased his first violin from “Ti Kisson” for a price of $15, he says, “and he was the one who gave me the go-ahead …I was still practising and he encouraged me that in anything that you do, you have to master the first one.”

He began following those guys to see them play and “Ti Kisson” always spurred him on to play, “whenever he is playing somewhere and I’m around he would give me the violin and that was an encouragement to me …so that is why this man whether he is dead or not – he is my mentor.”

Leonce also used to play the violin with the Mamay La Caye band, but according to Julian, “as soon as I showed up he used to give me the violin so that he could go and dance.”

Taking Over Mamay La Caye
Interestingly, at this juncture, Leonce disclosed that he was bowing out and would not be playing in public anymore and requested that Charley take over the band. That was in the 90’s, and Charley got to make a very worthwhile transition taking over management of the Mamay La Caye band.

Aside from his music schedule, Charley says, he was employed with Windward Islands Gases for more than 40 years and was thus able to supplement his income to purchase instruments for the band. Leonce had given him a flute and guitar when he took over the band.

After the takeover, Charley explains: “We reorganized the band, I bought speakers and I also made speakers, speaker boxes, amplifiers…and I made uniforms for the guys. Everybody was pleased and I maintained the name – Mamay La Caye …and then I ran with it, when we went out and play and we became #1.”

While Julian laments that they have lost some members over the years, the band, nonetheless has embraced new members to continue playing.

Charley is pleased to have received first prize at St. Lucia’s first ‘Musical Award’ ceremony. Additionally, he says, “I have received two ‘Gold Award’ medals…and that is why, I say I want to preserve that sort of music, because while we play it they don’t have it on file (documentary).”

The gifted folklorist has since gone on to produce two CDs; the first Vol.1 was recorded at ‘Place on Earth’ studio in Anse La Raye and then Vol.2 “that went well and it sold out…and I decided to do Vol.3, but you know sponsors in St. Lucia is chaos …you can’t get anything. But since, I have been playing at the hotels …for more than 40 years and at Windjammer for more than 25 years, tourists are coming in and they see us and enjoy our music.”

During a performance, Charley met a male British visitor who fell in love with their music and subsequently they developed good friendly relations. Later on, he says, the British visitor wired him a sum of 11,000 pounds sterling to produce their next CD.

Moving on, Charley admits that his ‘dream’ goal was for the production of theVol.4 album and though “they danced it, it was never documented …and so, I say before I die, I must document it.”

That last CD- ‘Cavalere au Dame’ , he says, has gone global and picked up royalties all the way in France, while the hit song ‘Chams’ has hit #1 on the charts in Martinique and Guadeloupe “and everybody loves it.”

In 2008, the Director of a musical ‘Expo’ which was being hosted in Spain to involve cultural groups worldwide offered Mamay La Caye an opportunity to perform in the country.

Charley and his group were equally delighted to receive a ‘monetary reward’ in the sum of 16,000 euros for the six-member unit.

Though he has travelled widely with his band, Charley says, his fondest memories is the Spain tour. “When I returned from Spain…two of my musicians built their homes and that’s what makes it so special.”

This exposure led Charley to meet another curious visitor, who then arranged for the group to perform in Seattle at an event named ‘Fiddle Tune’, and “where every fiddler in the entire US converge for a big festival.”

Charley said that they were well catered for, plane charter for the group and accommodation. When the band put on their first performance at a hangar, in Seattle, they were amazed by the warm reception they received from the crowd.

During that time, he said, they also held workshops and the people were taught to sing at least two St Lucian Creole tunes.

With such vast accomplishments as a cultural exponent and popular folk musician, what sort of legacy does Charley want to leave behind?

He responds: “Figures of the Quadrille is recorded and there is a video to it …I have a friend in Louisiana who transcribed and documented it and I gave it to the St Lucia Archives. So any of the younger generation who wants to learn it can go there and get a copy.