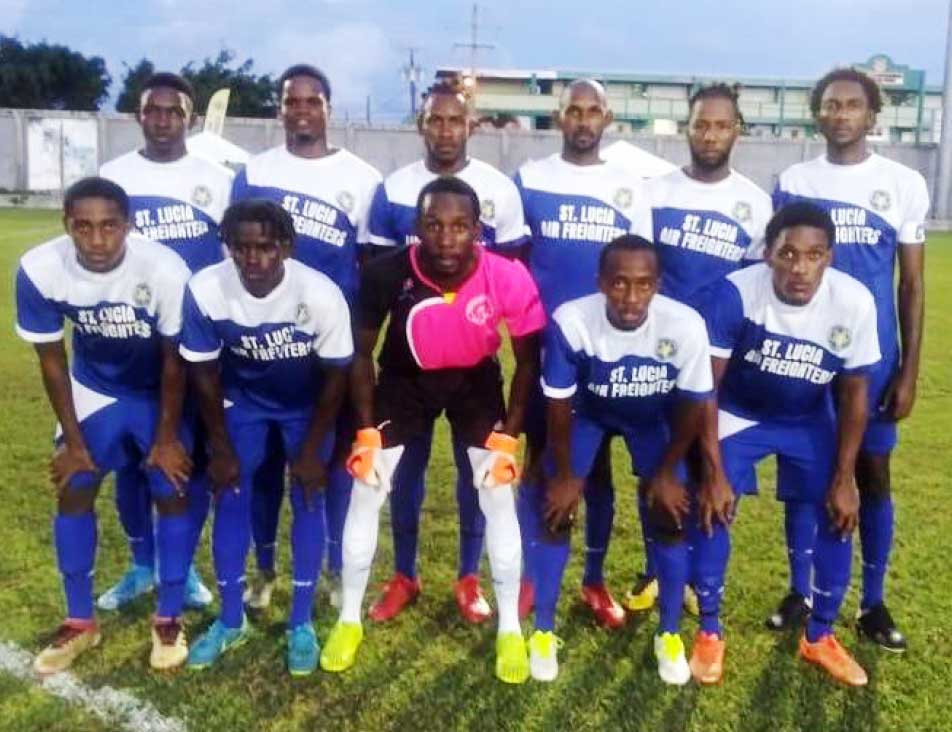 UP to press time last evening, there was no confirmed report coming from the office of the Saint Lucia Football Association (SLFA) Inc in La Clery as to the two double headers scheduled for the La Ressource playing field for today (Wednesday 14th and Thursday 15th) October 2020.

Last week a release from the SLFA Headquarters stated that due to security concerns the games which were scheduled for the La Ressource playing field in Mabouya Valley on Thursday 8th October have been postponed until further notice.

Matches continued last evening at the Canaries playing field in the SLFA Island Cup sponsored by the Government of Saint Lucia and powered by Smalta.

Prior to these matches the points standing are as follows: La Clery -12 points; Vieux Fort North – 9 points; Micoud – 7 points; National Under 17 – 6 points and Laborie – 4 points.

Both Micoud and the National Under-17 teams have a game in hand.

The leading goal scorers are: Keegan Caul – National Under-17 and Andrus Remy La Clery, tied on 5 each; Carlton Daniel – Micoud 4 and Jonathan Allain La Clery and Rai Gaspard – Micoud tied on 3 each.

Meanwhile, matches this past weekend in the SLFA Island Cup competition at the PMG in Vieux Fort and the Canaries Playing Field, saw a hat trick by the SLFA Junior footballer for the Year, Keegan Caul; Gros Islet continue their winning ways defeating Vieux Fort South 3-2 and Central Castries salvaging a 1-1 draw against Dennery.

On Saturday 10th, at the PMG, in the lone Super League game played under wet and soggy conditions, the National Under-17 team over powered South Castries with a comprehensive 4 -1 victory. The half time score 1-0 in favour of the national Under-17s.

Prolific goal scorer and captain of the National Under-17 team, No. 9 Keegan Caul led from the front with a hat trick in the 24th, 60th and 85th minute, with his second coming from the penalty spot. The other was scored by No. 10 Daneo Caroo in the 64th minute.

No. 10 Rasmed Eugene scored for South Castries in the 50th minute.

It must be noted that four yellow and one red card were shown in the game by referee, Julius Casimie.

At the same venue and in Premiere League action, it was a much more improved showing by the Central Castries team when they held Dennery to a hard fought 1-1 draw under what can best be described as “difficult conditions” as persistent rain put a damper on the encounter.

Dennery nosed ahead in the 32nd minute, the goal scored by No. 9 Ridel Stanislaus and despite both teams attempt to goal, Dennery was able to hold on to their slim advantage going into the halftime whistle of referee Kim Charlery.

At the resumption it was much of the same; Dennery looking to go further ahead, with Central Castries in search for the equalizer. The pendulum swung back and forth, but it was the Central Castries team who celebrated when their No. 8 Jason Similien equalized in the 68th minute.

At the Canaries playing field, in the first of a double header, front runners Gros Islet dug deep to overcome a stubborn Vieux Fort South team defeating them 3-2 in a very exciting encounter.
Gros Islet goal scorers were, Jennoi Ambroise in the 47th minute, Melvin Doxilly in the 76th minute and Aaron Richard in the 79th minute respectively.

Rashon Classe in the 71st minute of full time and Gregson President in the second minute of added on time scored for Vieux Fort South.

In the other game played Mabouya Valley confined Marchand to their third consecutive defeat winning 4-2. For Mabouya Valley, the goal scorers were Herbert Joseph in the 7th minute, Canice Sandiford in the 44th minute, Larry Abbot in the 90th minute and Vernon Abbot in the third minute of added on time.

Scoring for Marchand were Versaun Jerome in the 59th minute and Jarvis Joseph in the 76th minute.

Nearing the completion of the fourth round of competition in the Premiere League, Gros Islet heads the table with 10 points, followed by Dennery – 7; Vieux Fort South – 6; Roseau Valley – 5; Babonneau and Mabouya Valley both locked on – 4 points.