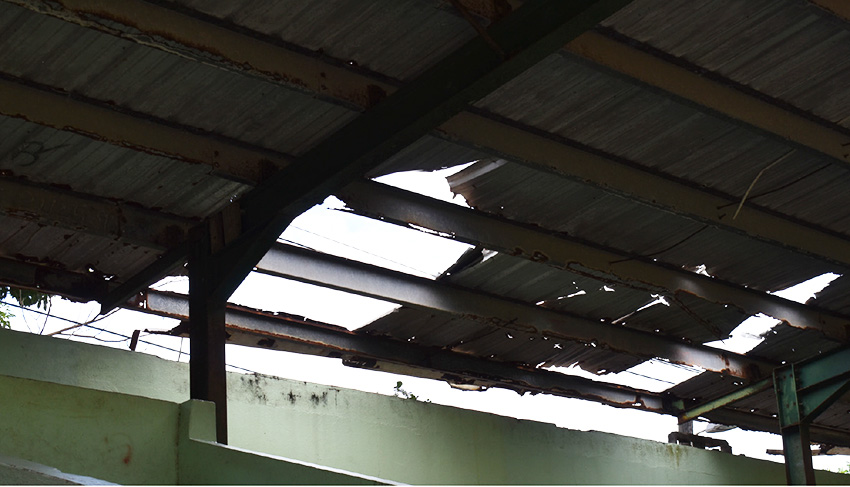 THE rehabilitation and resurfacing of the Marchand Grounds was part of the Saint Lucia Labour Party government social development mandate the last time they were in office. On completion of the rehabilitation process, the Marchand Grounds was expected to bring smiles to the faces of both past and present sportsmen and women in addition to grooming some of Saint Lucia’s next cadre of sporting stars within the Castries East constituency.

Many still ask the question, was that mandate fulfilled as that sporting facility, like many other facilities across Saint Lucia, have been vandalized by people who simply, on a daily basis it seems, go about their merry way destroying public/sporting facilities like there is no tomorrow?

A frustrated Opposition Leader and Parliamentary representative for Castries East, Philip J. Pierre deliberated on vandalism of sporting facilities in Saint Lucia. Pierre spoke during a question and answer segment recently held to officially launch the 22nd edition of the Parliamentary Cup in collaboration with the Marchand Football League (MFL).

Pierre went at length and at pains to point out the problems and appeal to members of the community to desist from vandalizing the facilities; and to others to take an interest in protecting the sporting facilities. He said, “Whatever we destroy as a public we have to look at it in the context of what it is costing each one of us when we have to repair”.

Pierre disclosed, “When the rehabilitation of the Marchand Grounds took place under the Labour Party Government, it was a joint effort between the Ministry for Infrastructure, the Ministry for Youth Development and Sports and the Poverty Reduction Fund (PRF).

In terms of cost, it was just under one million dollars.

He said, “There is still work to be done, and I really hope the opportunity will come when we can improve the Marchand Grounds, particularly the stands and the changing rooms that were repaired, but got damaged/vandalized”.

According to Pierre, the Marchand Grounds had lights before Sabina Park in Jamaica. It wasn’t only the lights but the entire field was redone.

“You may recall that was a cemetery. Many a good footballer got his leg broken on this ground because of the playing surface,” Pierre said.

“I want to beg the people of Saint Lucia to respect these facilities, because when they get damaged/destroyed, who suffers. The People suffer,” he said.

In terms of artificial turf for Marchand Grounds, Pierre was asked whether a Labour Party Government will move from natural grass to artificial turf, He replied, “No, we’re not about changing it. In fact, if I have the power, it cannot be changed”.

He lamented the fact that, “There is a lot of research that will show the best surface is the natural grass surface. The problem with grass surfaces, they constantly need water and proper drainage. Once you have proper drainage and an access to water, you’re ok. There are some places in the world at present where they are actually getting rid of the artificial surfaces”.

He added, “The problem with artificial surfaces, they were not made for the kind of weather that we have. We have one of the best groundsmen/curator in the world, Saint Lucian, Kent Crafton, he can re-make, re-do, re-grass, re-model, almost any playing surface”.

“My opinion and that is the opinion of the government that I will lead, we will discontinue the use of artificial surfaces”.

It must be noted, the last major sub regional sporting event, the Organization of Eastern Caribbean States (OECS) Games took place at the Marchand Grounds in 1991. The Mindoo Phillip Park was under rehabilitation and was not completed on time to host the Games.

For our readers’ interest pertaining to Kent Crafton, as mentioned earlier by the Opposition Leader, Kent has been the curator at the Beausejour Cricket Ground (BCG) renamed the Daren Sammy Cricket Ground which opened in 2002 and, since then: the DSCG has captured several best pitch and outfield competitions during his tenure.

Kent has assisted other regional venues such as Dominica and Grenada with pitch and outfield preparation ahead of their hosting of international games. He was instrumental in the establishment of the pitch ahead of Windsor Park’s (Dominica) debut as an international venue. Kent has attended several curators’ workshops, including one hosted by the International Cricket Council (ICC) in Dubai in 2012.