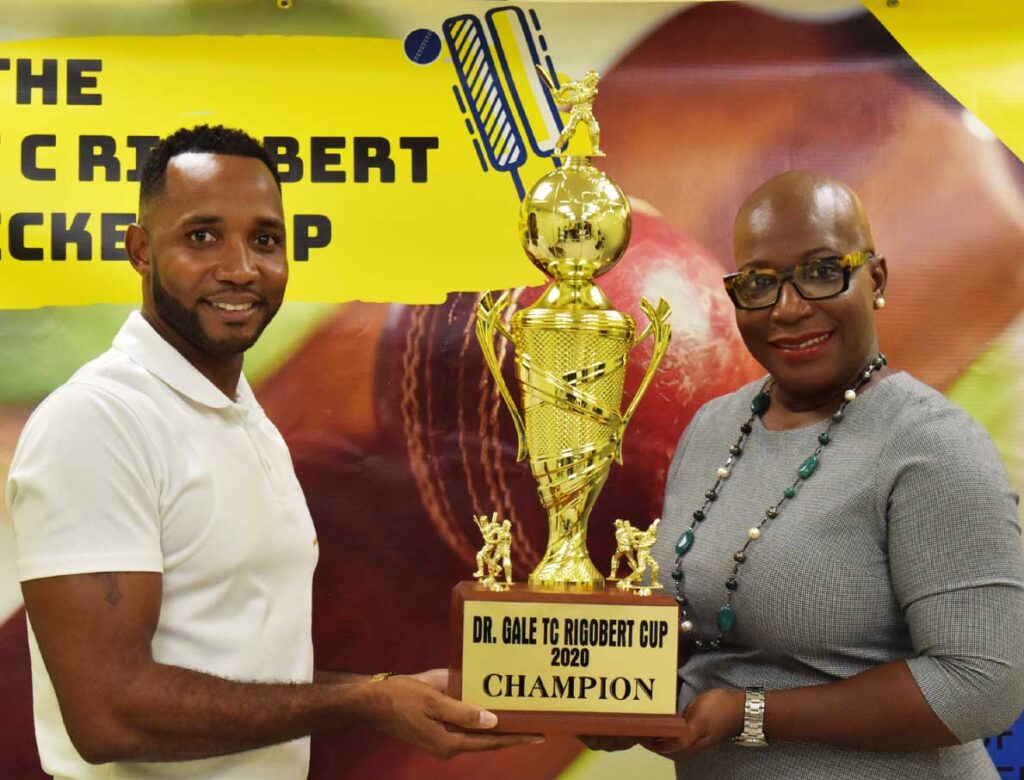 WEATHER permitting cricket action returns to the Wenn playing field in Mon Repos this weekend in the 2020 Parliamentary Representative for Micoud North, Dr. Gale Rigobert T10 cricket tournament. The announcement was made by Rigobert herself Wednesday at the Office of the Prime Minister.

Today three matches are on the cards with Game 1 between Babonneau Leather Back and Micoud Veterans scheduled to bowl off from 9.30 a.m.

Addressing the media present, Dr. Rigobert said, “This weekend proved very interesting to the extent that notwithstanding, we had to postpone the tournament because of the inclement weather”.

“There was great excitement leading up to that tournament; regrettably the rain got in the way, but it allowed us the time to respond more fully to the excitement and extend the tournament and show a greater level of participation and awareness and here we are to indicate that the tournament will begin this weekend weather permitting and will continue on into the subsequent weekend”.

She took the timeout to thank the many cooperate sponsors and volunteers from the community.

“Mon Repos is a cricketing hub and Micoud North can boast of many sterling sportsmen and women generally, so there is no shortage of talent. Special mention, to the youth and sports councils from Mon Repos / Micoud North and also the various youth leaders for cricket and football in particular,” she said.

Dr. Rigobert left the technical aspect of the tournament to the coordinator and former West Indies left arm orthodox spinner, Garey Mathurin who is also the head coach for the Sports Academy cricket team.

According to Mathurin, ”It’s a knockout format, six games will be played over two days (this weekend) and the following weekend being the semi final action on Saturday 24th,while the third place and final is slated for Sunday 25th”.

A number of key players to include past and present national players will represent the various teams. Cricket fans coming to witness the showpiece will see the likes of Daren Sammy; Garvin Serieux; Keon Gaston; Shervon Charles; Kevin Augustin; Sabinus and Evanus Emmanuel, Hazell Charlery and Mervin Wells just to name a few.

Dr. Rigobert seized the opportunity to speak about the sporting infrastructure for Micoud North.

“We also had the opportunity to visit the Desruisseaux playing field where there is more than enough evidence to suggest that a new field is in the making and that should serve as a sign of hope for our sportsmen and women in Micoud North who are also earmarked to receive a playing facility/new surface,” she said.

Dr. Rigobert disclosed, “My government’s focus on sports is comprehensive, curriculum, programming, team or club development; technical development in the various sporting disciplines, but also attending to the physical infrastructure, the playing facilities.

She feels satisfied with what has been done so far to get things to work together.

In the question and answer segment.

VOICE: Who are the consultants on the project?

Dr. Rigobert: “With respect to the development of the physical infrastructure on island among others, the Lockerbie’s, and they will continue with the work that they started pre Covid -19 also the experts with respect to the laying of the astro turf are here on island”.

VOICE: These experts are they involved with Donald Lockerbie or a separate company?

Rigobert: “We have engaged the umbrella consultant who would have out sourced certain aspects of the wider consultancy and as I can tell from the engineers on ground in Micoud South”.

VOICE: Bring me up to speed as to works on the Micoud playing field adjacent to the Micoud Secondary School and what is in store for the young people in Micoud North in terms of sporting infrastructure?

Dr. Rigobert: “When I offered myself for public service in 2011 one of the first thing I did was to engage with the sporting fraternities in the community, the Micoud and Mon Repos Youth and Sports Councils. At one of the early meetings that we held at the Mon Repos Community Centre, we recognized that with any given government we have limited resources, so we were able to map out a plan for Micoud North. It was at that meeting, we got to appreciate fully what the needs were and how we would undertake the work required”.

She continued, “At that time, there was no proper road to the Wenn playing field, it was a dirt road and one of the first things we endeavoured to do was to construct a new road to the Wenn playing field, which I am proud to say was done. Another concern that was raised then was the inadequacy of the Patience Court and during my tenure was able to attend to that as well. Similarly the Micoud playing field was long overdue for an upgrade and I remember saying boldly at the victory rally in June of 2016, we can have the rally here, but I know is right here we will see construction of a new playing facility. I am so happy to say, we are mere weeks/ months away from realising that”.

According to Dr. Rigobert, “The fencing has been erected, the foundation work has been done and now we wait the laying of the astro turf and the marking of it. I know our sportsmen and women are very excited about that, before year end as I promised we will have a new facility. When I held the last Gale Rigobert football tournament, I declared boldly that another tournament will not be held on that surface until such time”.

Dr. Rigobert: “We held at least three consultations with stakeholders, the issue of seating did come up. In the first instance we were made to understand that there is portable seating that when we have huge events that we would be able to accommodate that aspect, I can always cross check with the consultants/ projects manager”.