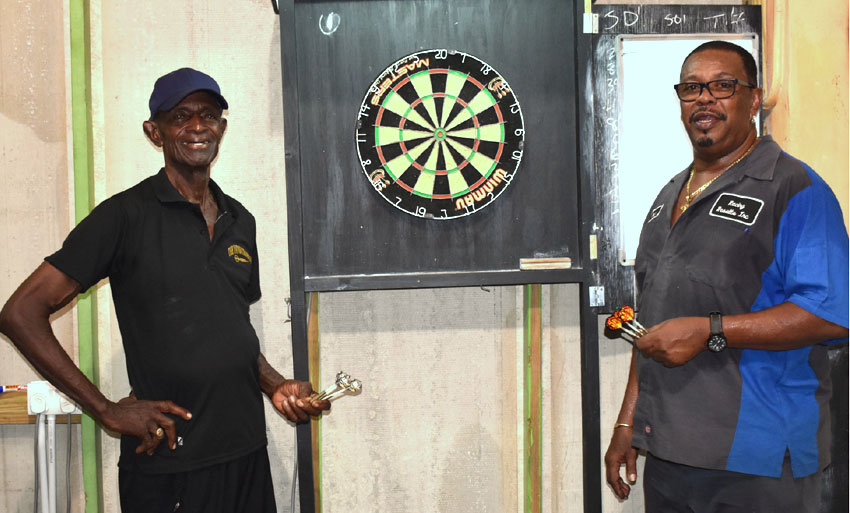 ITS not very often one gets the chance to be in the same quarters or even rub shoulders with a senior member of the society, who still has what it takes to win a dart game with his unusual, what one may consider to be, unorthodox style of playing the game.

Recently this VOICE reporter had that golden opportunity to be in the company of one such person during an ongoing Saint Lucia Darts Association (SLDA) 501 Classic tournament, held in collaboration with Prio’s Bar and Grill located in Corinth.

He is no stranger to the Saint Lucian society. Standing well over 6 feet tall, he is Gerald Cyril, affectionately known by all and sundry as ‘Cyril’. A former police officer in the Royal Saint Lucia Police Force (RSLPF), having served for 29 years. He was recruited in November 1963 and attended the Regional Training Centre (RTC) in 1964 from March -September in Barbados. Nowadays, not many young men and women go that distance working for the same organization/institution. Cyril has earned the respect he rightfully deserves not only in Saint Lucia but the wider Caribbean.

According to Cyril, “While in CID in the early 70s, the Commissioner of Police at the time had what you call a ‘Flying Squad’ which was headed by me with the likes of Kim Louis, Coe, Norbert, Ephraim and others, the names mentioned above all have retired, and from the Flying Squad, the Special Service Unit (SSU) came into being”.

Cyril served in the SSU for a number of years, from the early 70s up until he decided to throw in the towel (retire) on April 1st, 1992.

According to Cyril, “I couldn’t take on the type of administrators we had at the time, some of them were too political and you had a Commissioner, Algernon Hemingway, a British, I called him “lost your way”.

Cyril disclosed, “We had a number of misunderstandings, when he wanted to do things his way I tried to explain to him that Caribbean people/ more so Caribbean criminals think differently from the British. No Caribbean criminal will confess to you; you will apprehend them inside of someone’s home and they will have a defence, an alibi. It’s not like the British or Australian who would submit and ask for forgiveness”.

He said, “Caribbean criminals will fight to the end, they will tell all their lies and they will fight to defend themselves; we couldn’t see eye to eye because he wanted to go the British way, I told him he won’t be successful”.

“I can remember a killing which took place somewhere in the Choc area, its quite a few years back and I would say he spoil the investigation when he appeared on Television showing off a scarf that was found and said, whoever that have information can call the RSLPF. I told him it doesn’t work so, Saint Lucians will not pass on information to any Dick, Tom or Harry, they must have confidence in you and you must first have trust in yourself that you will not tell or say to anyone that they are the ones who gave you the information.

“Hemingway could not understand that. At the time, we only had a population of about 160,000 people and everybody knew everybody and you have to be very careful how you go about investigating crime because it’s like one big family you are dealing with and because of that we had our fracas, I had no choice, I called it quits after 29 years of service. I threw in the towel, I took early retirement,” Cyril said.

Cyril is well over 6 feet tall and could have played cricket like others as tall as him such as Charlie Griffith and Wes Hall, which he admired playing for West Indies. He could have played football and basketball as well. Why then did he decide to take on Darts?

“Darts, it’s nice, it’s a relaxing game, you have to focus and at the time as a young police officer, I started playing darts with John Steel on Bridge Street. John taught me and I became a very good darter,” he said.

He added, “In the 80s I went to Guyana, not to play darts, but on a 12 weeks training in the Jungle, in Bartica. I was placed with the soldiers; they had a few dart boards in there. Kim Louis (Saint Lucian) was also there and in all the games I played, I remained undefeated. In fact that’s where I taught Kim to play the game. We played pairs, we had some lovely games, and we were victorious. When I returned to Saint Lucia I went hard on it, I kept playing. I also played for Vide Boutielle Cultural Club (VBCC) in La Clery and the RSLPF which I represented a few times, but since I was a member of VBCC, I remained with them.”

On Darts Championship: “I have won a few championships/ medals/ trophies along the way; I have been to Trinidad and Tobago, Miami. The second time I went to Guyana was to play darts”.

Former players: According to Cyril, “Kim Louis, Albia Phillip, Peter Ferguson, Kenrick Pierre, Robert Charles, Jacinta Raggie, Theodocia Pierre, all stalwarts in the sport. I didn’t play with Denis Louis (Prio) he came a bit late. Prio as he is affectionately known has been very instrumental in lifting the darts to where it is right now and it’s a very good thing and literally keeps people away from mischievous acts.”

Ten year hiatus: “Many players stayed away for various reasons, and recently Prio figured that I should return and to take part in the current 501 tournament. I am enjoying the friendly rivalry and camaraderie”.

Introducing Darts to Schools: “Why not, this is a good thing to do. The Ministry for Youth and Sports and Ministry for Education in collaboration with the Saint Lucia Darts Association can come together and organize a festival and see how it goes and then take it from there. Darts is an International game, it’s a gentleman’s game, you don’t find people coming and disturb you when you playing, it’s a prestigious game”.

Biggest challenger: “Oh boy, to be honest in my playing days I didn’t have any difficulties playing and defeating my opponents. I was very accurate, I have an unorthodox style of playing, but we have some quality players like Peter Ferguson, Robert Charles and Linus Theophilus”.

Putting opponents away: “No, right now I will play a game or two, I am not expecting to breeze past my opponents like before and to be champion again, but will give a yesteryear type performance, make them work hard for the win.”

Final words: Cyril again made an appeal to the Ministry for Youth Development and Sports to encourage the various schools to introduce the sport to the young men and women.

He said, “It’s a prestigious game, it helps you to focus and it can go a long way by preventing the young ones from sitting on the sidewalks, they will also get the chance to put away the electronic gadgets for a few hours to learn the sport”.