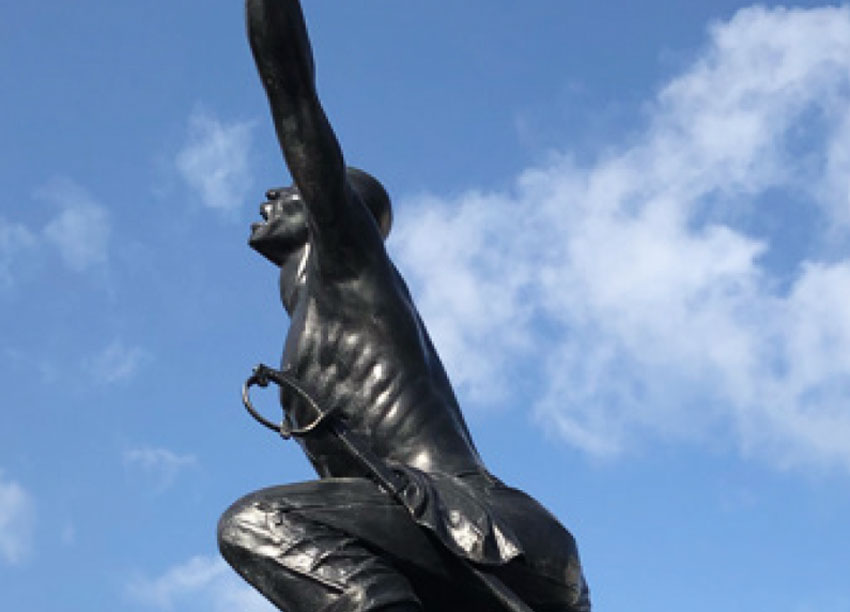 204 years after a shipwreck took the lives of chained Saint Lucian Freedom Fighters off the coast of North Devon, a quiet struggle continues…

ON 17th October 1796, a ship named ‘London’ carrying 146 slaves and a shipment of gold from Saint Lucia wrecked at Raparee Cove off the North Devon town of Ilfracombe – and since then, a long and quiet struggle has been ongoing to pay homage to those who perished.

Ben Bousquet, a veteran Saint Lucian campaigner against racism in London, dedicated his life to retrieving the bones and repatriating them; and in 1997 he drew the Saint Lucia government’s attention to the unwillingness of the British authorities to cooperate.

Thirteen years on, Bousquet’s bones are buried in South Africa (where he lived his last days) and Saint Lucia is no closer to receiving those from Raparee.

But while we may be sleeping on this job, others are very wide awake to the real story of the mysteries surrounding the wreck, the bodies and bones, including the film industry on both sides of the Atlantic.

The BBC has prepared a documentary — and so have the Americans.

On October 20, FLOW TV presented the fourth of an interesting six-part weekly series named ‘Enslaved’, starring Samuel L. Jackson, which focused in great part on the wreck and its human cargo, revealing on screen all Bousquet and Ilfracombe historian Pat Barrow have been saying, over long years, about the mysteries of ‘The Wreck at Raparee’.

The unappointed guardians keep the bones locked away in Bristol, claiming they cannot yet determine whether bones found ashore actually belong to the slaves.

Some also claim the ‘African slaves’ bones should be sent to Africa.

But Bousquet and barrow always insisted that since the 196 ‘slaves’ were actually Freedom Fighters who had defeated the British and French in Saint Lucia and only died in chains after being captured and shipped to Britain for sale as punishment, their bones belong ‘back home’ in the island they fought for – and liberated from slavery.

But while the English gatekeepers are playing ‘cat and mouse’ with the Saint Lucian bones, there are others as dedicated as Bousquet and Barrow to telling the true story of the ‘London’, like Khris Majanpra, a historian at Tufts University in Boston, who’s adopted the project with no less (and probably even stronger) zeal.

The captured Saint Lucians abroad the ‘London’ were actually ‘runaway slaves’ (Neg Mawon), who’d freed themselves through battles against both French and British troops — and were eventually recaptured by reinforced colonial forces after establishing their freedom and independence.

October is Saint Lucia’s Kweyol Heritage Month for many reasons, from ‘Jounen Kweyol’ to celebration of our Indigenous heritage.

October 17 is also Fete La Marguerite, but it’s also the date of the perilous Wreck at Raparee.

When Ben Bousquet started the struggle to repatriate the bones several decades ago, the Reparations Movement was nowhere close to where it is now and the British successfully employed delay tactics to keep the truth covered under wraps.

Ben and his then British parliamentarian friend Bernie Grant took the battle for the bones all the way to London, but both were kept at bay while the bones remained hidden – until quarrels emerged between those seeking the truth and those keeping them hidden.

What the Samuel L. Jackson series most revealed too, is that while the Bones at Raparee remain stacked away, researchers and film-makers have continued showing interest, as this is the type of story that movies are made of.

But Saint Lucians know little or nothing about the Wreck at Raparee.

Only those who watch the ‘Enslaved’ series will have realized and heard, most for the first time, about the ‘London’ and its cargo of chained Saint Lucian Freedom Fighters.

At dawn on the morning after the ship wrecked, Raparee citizens sought to rescue survivors, but when they realized the cargo also included gold, their emphasis naturally switcched from ‘rescue’ to ‘search’.

While all the chained ‘slaves’ in the bottom decks died after the ‘London’ wrecked on the Raparee rocks that night, those in upper decks survived, but all were nevertheless sold.

‘Enslaved’ also revealed that some of the main British keepers of the bones are now being accused of hoarding information and seeking to change the narrative by casting dark shadows over the authenticity of the claims.

But in this age of advanced DNA science, as long as the bones exist, their true story can always be told – which best explains the official reluctance to carry out those long-overdue scientific investigations and similar unwillingness to repatriate them to Saint Lucia.

Now, more than ever, is time for Saint Lucia to come to the table and step-up to the plate to demand repatriation of the remains of those valiant Saint Lucian Freedom Fighters who still died in chains after having fought for — and won — their freedom.

Next year will be the 205th anniversary of the Wreck at Raparee and it will be a fitting time to include its remembrance as part of Kweyol Heritage Month 2021.

But before that, we must appreciate the increased interest in and attention being showed by Caribbean TV channels and networks to Reparations and related issues of late, as seen in a monthly series also being aired on TEMPO.

Given the importance of accelerating dissemination of regular, reliable Reparations information to keep Caribbean citizens and the world abreast with the current pace of progress following the recent global Black Lives Matter backlash; and with the University of the West Indies (The UWI) and the Caribbean Community (CARICOM) at the vanguard, it can only be expected that UWItv Global will soon also take the Reparations message to the Caribbean and the world.