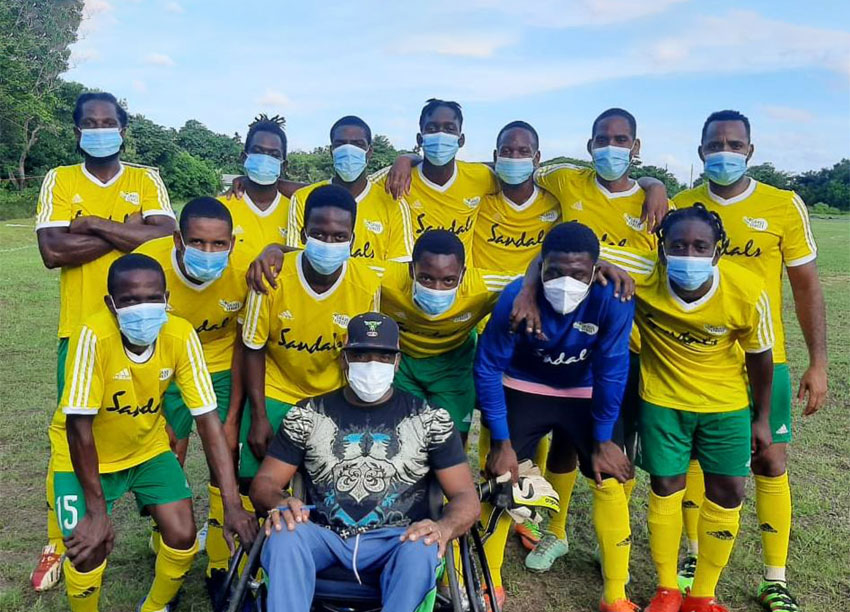 THREE matches are on the cards for this weekend in the Ryder Cup football tournament at the Wenn playing field in memory of Andre ‘Ryder’ Charlery who passed away tragically (road accident) earlier this year. The tournament is sponsored by Dr. Gale Rigobert, Parliamentary representative for Micoud North in collaboration with The Micoud Football League and the family of Andre Charlery.

On Sunday 25th, from 2.00 p.m. Pakis will play their second encounter against Leeds. Leeds is currently on three points after winning their opening game on Wednesday defeating Grass Street 1-0.

In the second game, scheduled for 4.00 p.m, Uprising will fancy their chances against Atlantic Ballers.

On Friday 23rd, TGM played Pakis, results for that encounter was not available up to press time yesterday.

Spokeswoman for the tournament, Zena George, following Day one encounter said, “All protocol rules were enforced upon entry, everyone was registered, sanitized and temperature checked. We also had a recording played throughout the 90 minutes reminding fans to adhere to the safety protocols that’s in place by the Ministry of Health and the CMO”.

“In terms of the enthusiasm, the teams are very excited about the tournament and it is well received by the various communities. From the opening game of the tournament between Leeds from Micoud and home team Grass Street you could have seen the passion and excitement from the players and spectators alike. The turn out was excellent, we had football fans from Micoud and its environs coming to support their respective teams”.

“On the pitch: It was a fast paced game, the fans were pleased with the first goal being scored by Leeds, it’s the team Ryder played for”.

The scores were locked 0-0 at the halftime whistle as both teams missed out on a number of scoring opportunities.

On the resumption the urgency and energy were much different than the first half as both teams upped the tempo a few notches as they were eager and hungry to score. Grass Street played with 10 men after having received a red card.

The deadlock was finally broken when Leeds nosed ahead in the 60th minute, the goal scored by Conrad Evans. The 1- 0 deficit didn’t discourage Grass Street who put up a fight in search of the equalizer with 30 minutes of play remaining.

On Monday 26th, Grass Street will look to redeem themselves following their 1-0 defeat at the hands of Leeds in their first game when they take on Praslin Bay. On Wednesday 28th, playing back to back matches, Praslin Bay will fancy their chances when they meet Pakis; Thursday 29th, Atlantic Ballers versus Helenites and Friday 30th, PYO plays Young Strikers. The midweek matches will kick off from 4.00 p.m.