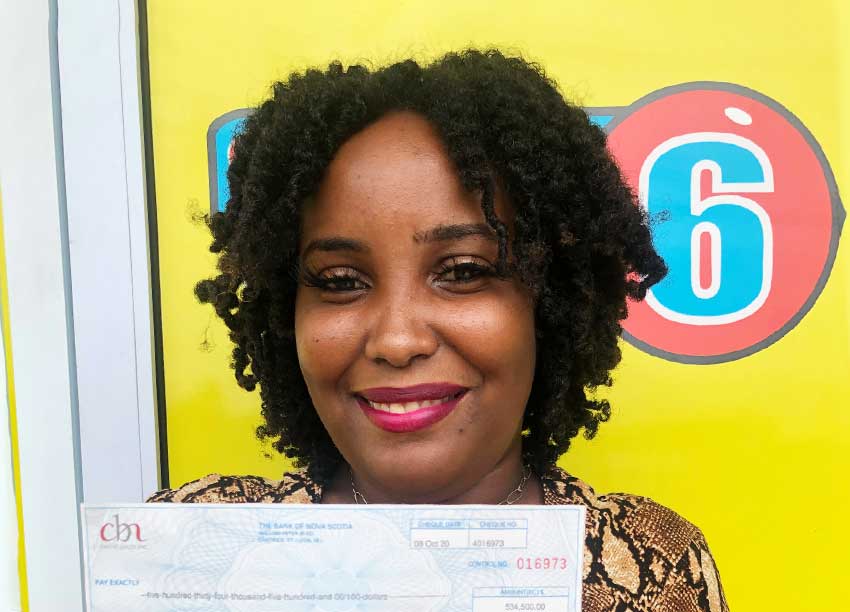 NINETEEN-YEAR-OLD Gabby Eugene is half a million dollars richer after hitting the Super 6 jackpot almost two weeks ago. The Vieux Fort resident was presented with a life changing cheque yesterday at Saint Lucia National Lottery’s studio and according to her, she simply feels “numb”.

“This is history in the making with SNL. This is the first time such a young person has won the Super 6 jackpot,” Mary Springer SNL’s Regional Sales and Marketing Manager said in an interview with The VOICE.

“Traditionally we saw more of an older player base but throughout the years there’s been a shift; younger persons now are more aware that it is indeed a significant amount of money so I’m so happy to see that. Gabby took a chance and she actually won,” Springer added.

“I just knew; it was a gut feeling,” she told us after receiving her cheque.

“Luckily for me it was the Quick Pick that won the lottery—it wasn’t even the one I wanted,” she said to media personnel.

It’s quite a gift for the teen, who turns 20 next month. Eugene plans on taking things slow however. For now she’s simply focused on furthering her studies.

According to her, “I want to go back to school to pursue corporate law or a career in business. There’s just this thing about business; there are many other things I know I can do but business is just my thing.”

Life has certainly changed for Eugene, and her dad who is also a Super 6 player, perhaps is even prouder. Gabriel Eugene smiled from cheek to cheek and nothing could break his spirits on that memorable day.

“When Bri called me that night I thought I was dreaming,” he said.

As for the lottery winner, she’s still caught in a reverie.

“I just feel numb,” she told a fascinated audience whilst fighting back tears.