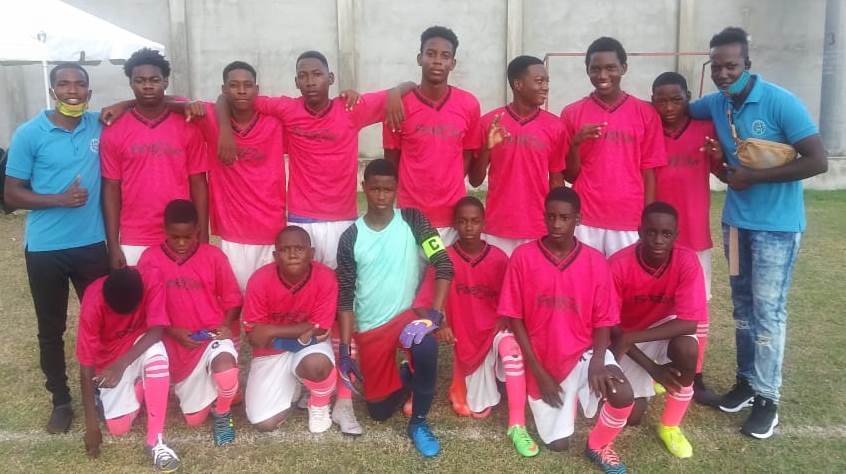 The main highlight was a hat-trick scored by Keith Glasgow for T Valley Under 13s against LA All Stars. In that same encounter T Valley were run away winners drubbing LA All Stars 8 – 0; while in the south of the island, Uptown Rebels defected Aux Lyon United 3-1. In Under 17 action at the PMG, Platinum had the better of Knights 4-1 with Benton Joseph scoring two goals, and on Sunday,  No.17 Shaquille Vitalis (Aux Lyon) scoring a hat- trick against Challengers.

The goal scorers for NYAH FC were Kailum Cooper in the 5th minute and Curtrel James an own goal in the 2nd minute of added on time.

Scoring for FC Pioneers were Danielle Hippolyte in the 13th and Curtrel James in the 23rd minute.

In the day’s final game in that division, CT Foundations with a goal from Cornelius Edmund in the 9th minute defeated 1987 All Stars 1 – 0.

At the Anse la Raye playing field, in Under 13 in the Western Zone, Flow Lancers and New Generation played to a 2 – 2 draw.

Scoring for Lancers were Raheem Peter and Deshaun Paul in the 8th and 59th minute respectively.

New Generations got their goals from Mc Kendy Cadette in the 21st and Dervaj Lawrence in the 59th minute.

In the other game played T Valley crushed LA All Stars 8 – 0. Keith Glasgow scored a hat trick in the 42nd, 45th and 53rd minute. The other goals were scored by Zedane Louisien in the 11th, Marcus Harrow in the 15th, Joshua Martial in the 19th, Ezekiel Eunude in the 20th and an own goal by Roderick Henry in the 55th minute.

In Under 13 action at the PMG, Southern Zone.  RYO and DCYO played to a 1 – 1 draw. Carlton Menville open the scoring for DCYO in the 7th minute; while Ethan Oculien equalized for RYO in the 10th minute.

In the other game played Uptown Rebels defeated Aux Lyon 3 – 1.

Scoring for the victors were No. 8 Aunarje Theodore a header in the 16th minute to put Uptown Rebels ahead, No. Ryan Simeon in the 39th minute    and Tristan Alphonse in the 53rd minute.

Dillon Gilbert scored for Aux Lyon in the 44th minute

Under 17 division, Southern Zone at the Phillip Marcellin Grounds.

Platinum defeated Knights 4 – 1, with No.13 Benton Joseph scoring a brace (2) in the 37th and 46th minute and the others coming from the boots of No. 7 Tristan Mariel in the 21st minute and No. 9 Jason Isidore in the 35th minute.

For Knights, No. 7 James Philgence scored in the 23rd minute.

In another game played, RYO defeated Challengers 4 -1, the halftime score 3-1. For RYO, the goal scorers were – No. 17 Shaquille Vitalis scoring a hat-trick in the 11th, 24th and 35th minute, while No. 10 Claudio Joseph in the 18th minute.

For Challengers, No. 17 Richie William pulled one back in the 29th minute.

Still in Under 17 action, Aux Lyon defeated Shamballa 2 – 1, the halftime score nil all.

For Aux Lyon, No. 14 Merciah Wells from the penalty spot and No.7 Kardege Johnny.

According to reports, play was halted for at least 20 minutes to allow medical personnel to attend to an Aux Lyon who experienced a displayed kneecap, following an assessment; the player was taken to the St. Jude’s Hospital for further care.