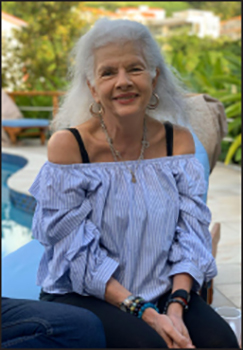 The six-part, half-hour feature series will air on the National Television Network and Helen Television, Sundays at 7 PM. The online release of each episode will coincide with the TV premiere.

Director of Events at the Cultural Development Foundation said the theme reflects the role of creative writers as social commentators “who elevate every nuance of culture and society for what they are – the landscape of daily life, and in the million ways and sounds, vignettes and vistas through which it unfolds, and how creativity breaks through the concrete of these spaces.” Ms. Frederick explained.

Katherine Atkinson’s work has been published in Pree, The Caribbean Writer, SX Salon, the Commonwealth Broadcasting Association, and she was shortlisted for the Hollick Arvon Prize in 2013. She is recipient of the 2006 Saint Lucia National Arts Festival prize for Literature, and winner of the 2007 Word Alive performance poetry competition. Her play, Requiem for a Badjohn, was selected for a staged reading at the Brave New Play Rites Festival 2013 in Vancouver, Canada, and was the official selection of the Saint Lucia National Arts Festival 2017.

Jane King has published three collections of poems: Into the Centre (1993), Fellow Traveller (1994) and Performance Anxiety (2013). She won the Minvielle & Chastanet Arts Award in 1990 and was the first recipient of the James Rodway Memorial Prize in 1994. Her poems are known for the wry wit with which they address the place of a light-skinned woman in a race-conscious Caribbean as well as concerns over the role of the creative imagination in Caribbean societies.

A singer, songwriter, musician, poet and Naomie “Ngozi” Grandison’s passion for people, art and music is evident in the projects she champions. Her message exudes her social consciousness. She co-founded the Wellness Innovators’ “I am Beautiful” school campaign which won the National Youth Council ‘Esteem Award’ in 2012. Naomie was also a catalyst for the creation of Headphunk, a performance arts showcase, which features an open mic for musicians and poets.

Performing out of Washington DC where she is based, Yasmin Solitahe Odlum, has been nationally recognized through the Minvielle and Chastanet Fine Arts Awards Scheme on three occasions in the 1990s. During the 1990s, Ms. Odlum also co-edited an anthology with Ms. Nadjila Carasco Bailey called Walking Iyanola on Pious Feet. Her published work has appeared in: Under We Sky: An Anthology of the Creative Writers’ Association of UWI-Cave Hill (1987); Roseau Valley and Other Poems for Brother George Odlum (2003); Soul of the Women of the Americas (2016) and in The Writer’s Guide (2020). In 2020, after a hiatus of at least a decade, she began to perform a few of her pieces at the OAS and at the Writer’s Center in Bethesda, Maryland. In 2020, she emerged winner of the Annual Poetry Contest of the Bethesda Urban Partnership Inc out of over 300 entries.

The influence of advocacy and its ability to initiate change greatly influence Geena Mc, Phee’s work.  She is passionate about the arts, some of which include poetry and calypso. According to her these literary platforms demonstrate the true essence of language in its most witty and strategic form. Her pieces are inspired by societal issues.

Canada-based, award-winning performance poet and published writer Lisa Dublin has inspired and engaged audiences for over fifteen years. Between the years 2003 – 2010, she commanded a space in top tier of winners of the Word Alive Performance Poetry Competition. She is a published poet and short story writer, with works published in the 2017 volume of Anthology Home: Stories Connecting Us All, Sani Baat– A Voice Throwing, and the 2003 Anthology: Roseau Valley and Other Poems for Brother George Odlum. In 2017, she published her first Novella “How George Jones Saved Christmas.”

The theme for this year’s NAF is Bridging Social Distances, which addressed the  parallel contexts of COVID 19 pandemic and the importance of creating a platform for the transmission of generational knowledge on creative processes.

Voices of the Underground will be followed by a ten-part theatre arts series featuring a play by Hayden Forde and another by Dan-Yelle Dubois. A documentary series on the CDF story will culminate the festival. It will highlight CDF’s work in the development of modern and contemporary dance, community steel pan and theatre arts.