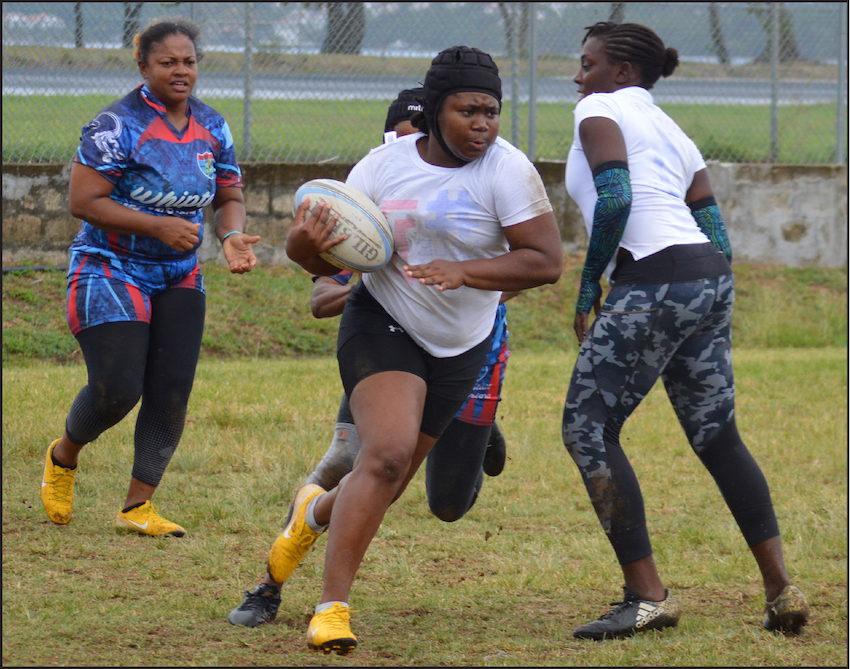 Rouges men’s rugby team maintain their dominance in the Saint Lucia Rugby Football Union (SLRFU) 7s series when they made a clean sweep in the three matches that they played on Sunday 27th September 2020 at the Sab Sporting Facility.

On the women side of things, it was sweet revenge for Whiptail Warriors after they were defeated by a combined team of Rogues/Renegades in the first round of matches played on Sunday 13th September with scores of 35-0; 24-5 and 21-0.

In Sunday’s encounter, captain Senetta Vigier of Whiptail Warriors left no stone unturned when she marshalled her team to win the best of three series 3-0, with scores of 9-10; 22-7 and 14-10.

The VOICE spoke to Senetta Vigier captain for the Whiptail Warriors female team about her team’s shocking victory. This is what she had to say.

“This time around we were better organized, we had a game plan that we basically stuck to and mentally we were ready”.

Senetta added, “It was a team effort from the scrum, we were able to win a majority of the balls from the scrum and thereafter the ball was taken from the blind side where the backs which are the runners for the team would make it into a try”.

She said, “I must say it was a collaborative effort: we have demonstrated that we have what it takes, taking into consideration our individual skills and that’s how were victorious”.

With eleven days to go before the final 7s tournament and the scores locked at 1-1, Senetta said, “It has been a challenge getting the players out to train and likewise getting them present on game days. However, we the senior players have taken the initiative to try to get the younger ones, meaning those persons that have not been actively involved, to come out and train. If we all train together we basically know how each other play and we can achieve more, and better”.

Senetta took the time out to encourage her teammates to come out and train. she said, “Let us once again emerge victorious. We all have what it takes and if we don’t train together then it becomes difficult to achieve the desired outcome which is winning”.

On the men side of things, a Round Robin style was used for this leg of the tournament. Five games were played in total. Rogues was in a no nonsense mood against Monchy Sharks defeating them 47-0; Renegades breezed past BTC 27-0; Rogues continue where they left off in the final against Renegades, this time around winning 38-5; Monchy Sharks made amends after their 47-0 drubbing at the hands of Rouges when they had the better of BTC 20-0, but in their final game could not keep up with Rogues when they went down 27-5.

The final standings were Rogues in first place, Renegades in second nd Monchy Sharks in third.

“It was good to play our rivals when there was so much talk of us losing our touch and place to the upcoming Renegades team. They are a good team and we appreciate their hard work and commitment to the sport, they bring a lot of meaningful rivalry to the sport and this keeps rugby moving in the right direction”.

According to Jerry, “My club is determined to make a statement of keeping our record and that’s how we go into every tournament to win. We train hard and we show it out on the field”.

“Overall not too bad, was expecting a greater challenge to Rogues men from the Renegades. The Rogues outfit did their homework and played the national patterns of moving the ball wide, create mis-matches and then attack the spaces”.

Wayne added, “The Young development players were better in the tackling defence than their previous encounters from the last tournament”.

He disclosed, “As I indicated before, these tournament are being used to develop and assess the players both development and senior players in preparation for regional and international tournaments qualifiers 2021-2022”.

Wayne said, “I will continue to push for professionalism, discipline, field awareness and mental toughness at these tournaments as these are sometimes the short comings of both the male and female teams as talent and skill will get you so far. Building the other core elements would ensure that you have a spot on the podium. “Trust the System”.

Meanwhile, the final in the 7s series will take place on Sunday 11th October, this event will be hosted by Whiptail Warriors and Monchy Sharks in collaboration with the SLRFU on the Corinth playing field from 11.00 a.m.