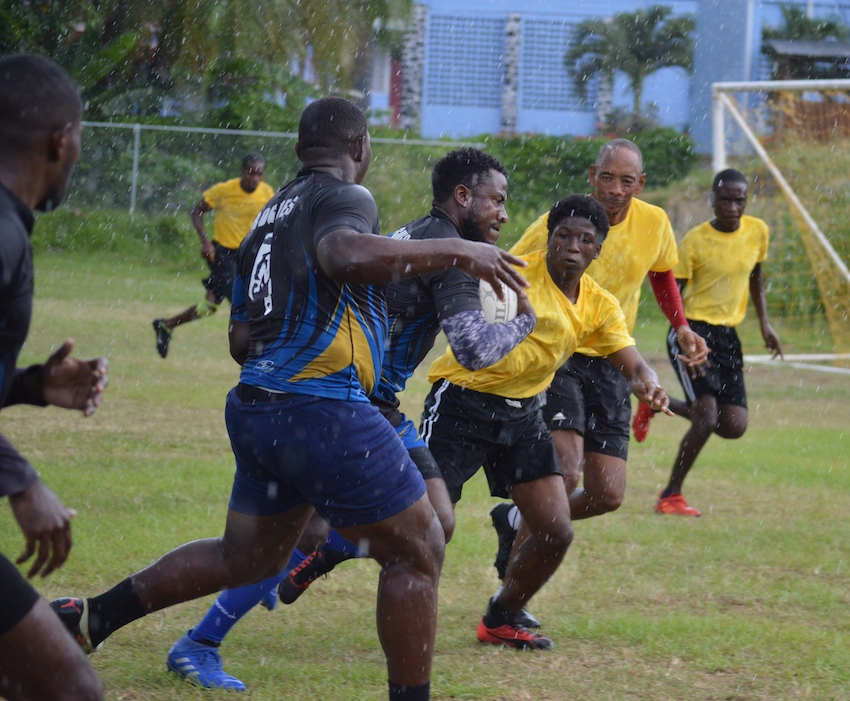 The La Clery playing field came alive on Sunday 13th September 2020 when Rogues Rugby Club in collaboration with the Saint Lucia Rugby Football Union (SLRFU) stage the first in a series of Rugby 7s following on the heels of the Rugby Tag 5s tournament.

Some of the matches played including the final can best be described as “High Intensity” this was combined with activity associated with the Inter-Tropical Convergent Zone (ITCZ) which cause scattered showers and severe thunderstorms during the mid-afternoon session which had non-players, fans and media personnel running for cover.

The two female teams played a best of three matches, R and R was no pushover as they dominated throughout winning all three games, scores: 35 – 0, 24 – 5 and 21 – 0 and despite the heavy defeat, Whiptail Warriors with Mary Roberts, Senetta Vigier, Dela Rene, Sherriaan Monrose, Kisha Edgar, Chantel John and Merissa Wilfred in their lineup, the team still gave a good account on the pitch.

Following the preliminary matches for the male teams, Monchy Sharks took on Reela for 5th place.

In quarterfinal action, Renegades was in a no-nonsense mood defeating  BTC 22 – 0; while Rogues 2 continue their good run on form when they breeze past Whiptail Warriors 24 – 7.

For the championship trophy, weather-wise the worse was over as all eyes glued on the pitch for the much anticipated final between the undefeated and three-peat champions of Rugby Tag 5s Rogues 2 and Renegades.

It was all Renegades at the halftime whistle with a score of 7 – 0, 1 try and 1 conversion.

At the break saw both teams along with their respective coaches re-strategizing their game plan going into the second half of play.

On the resumption, Rogues quickly shift into high gear with all cylinders ablaze as they went on to equalize the scoreline 7 all, 1 try, 1 conversion.

With 60 seconds left in the game, Flavien Gabriel of Renegades tried for 5 more points to make it 12 -5 in favour of Renegades. However, just before the final whistle of Referee and Technical Director of the SLRFU, Wayne Pantor, Rogues’  captain, Jerry Charles tied the scoreline for a further 5 points (12 -12) game on; Charles also had a  successful conversion (2 points) for a final score 14-12 to Rogues 2, who once again remain the undefeated as champions.

Coach/ player of the Rogues Rugby Club, Jerry Charles spoke to the VOICE following the final encounter about the event. This is what he had to say.

“It was just a test of our tackling session and as customary with the SLRFU, we decided to host the Rugby 7s, game 1. Keeping in mind with all the Covid-19 protocols we had a tent set up to check every individual including the players on arrival”.

The sky is the limit: “It’s way up there, we saw a new cadre of players coming and displaying plenty of talent and intensity and in terms of tackling, it’s a major improvement coming from the Tag 5s tournament, so I can safely say, the sky is the limit for Saint Lucia rugby”. he noted.

Playing undefeated: Charles said, “Its just commitment to the team, coming to training and understanding what is required from the coaches and just go out and display/execute on the pitch”.

Wayne added, “The new national development players got the opportunity to practice what was taught and their respective assessment on different areas of the game in a practical setting”.

Intensity and physicality: “Is a strong point of Saint Lucia Rugby, the areas both male and females need to focus on. To be more competitive would be the mental game discipline and tactical decision making in contact and open play. he noted.

Meanwhile, the showpiece continues on Sunday 27th September with the second tournament hosted by Renegades, the event is expected to kick off from 11.00 a.m. at the SAB playing facility.